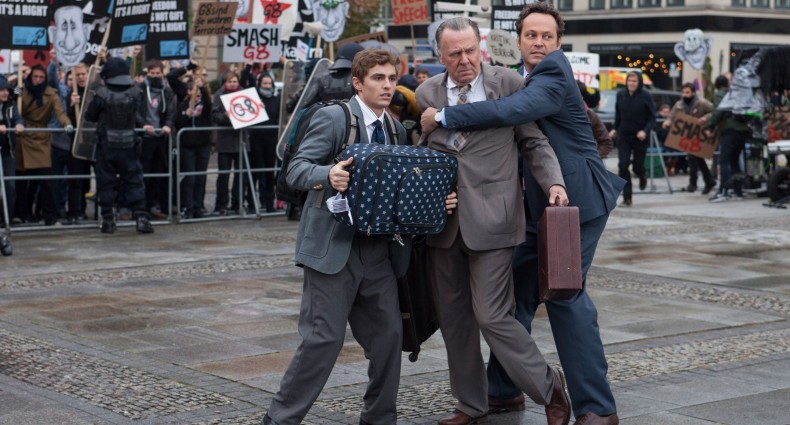 Ken Scott’s second collaboration with Vince Vaughn, Unfinished Business, is suitably funny and well-performed, even if it sometimes can’t help but barely feel like an actual movie.

In recent years, Vince Vaughn has cultivated a persona similar to that of Adam Sandler, another comedian known for his double and triple digit box office draws. Neither comedian works on projects that are particularly well-received by critics, but they do often make a boatload of cash, and, if you like the comedian, you’re probably going to like the movie. However, where Sandler has taken this as an opportunity to make the dumbest, easiest, and most mindless movies possible, Vaughn has utilized it as a forum to make deceptively intelligent comedy films like his sorely underrated The Break-Up as well as 2013’s Delivery Man, an American remake of the French-Canadian comedy by director Ken Scott.

Scott and Vaughn team up again for Unfinished Business, a globe-trotting raunch-fest about three lowly businessmen at the end of their ropes who need to close a major deal in Berlin to keep them from going under. Dan Trunkman (Vaughn), who Jerry Maguire’d himself from his last job a year prior, along with his two employees – the perpetually horny but married Timothy (Tom Wilkinson), and the arguably impaired Mike Pancake (Dave Franco) – is ready to shake hands and close the deal until he sees his former employer, the cold and ruthless Chuck (Sienna Miller), negotiating with the client he was sure he had secured.

Ken Scott’s second collaboration with Vince Vaughn is arguably more ambitious than their first, which made good use of Vaughn’s affable everyman quality that has become a trademark of his comedy. However, no amount of country hopping, plane riding, and car driving around the world can help the feeling that, as funny as Unfinished Business actually is, it’s a noticeably lesser product, one that suffers from a distinct lack of polish and care in the editing room. From minor technical issues to sweeping narrative inconsistencies, Unfinished Business often feels slapped together in the worst ways.

Take one scene, for instance, where Dan’s wife calls him, describing a vivid sexual fantasy, completely unaware that she is on speakerphone. It’s a funny bit, sitcom-y in nature, but funny. However, in the very next scene, she appears again, concerned about the well-being of their young daughter, who was involved at a fight in school. Not only has the lighting changed drastically, it appears that an entire day has passed while, in Vaughn’s neck of the woods, it’s only been a couple of hours. It’s this kind of sloppiness that ultimately undermines Unfinished Business from being the genuinely funny, surprisingly touching, and hilariously performed comedy that it is.

Because, and this can’t be stressed enough, this movie really is funny. Funnier than it has any right to be, in fact. With a premise that seems as if it came straight from one of Vaughn’s earlier, better films, as well as this nagging feeling that the entire thing barely feels like a movie, Unfinished Business manages to keep its head above water with a constant stream of funny material, and inspired performances by its three heroes, including hilarious supporting turns by Nick Frost and James Marsden. Vaughn is a reliably funny guy, and his work here is no exception. What’s so great about his comedy is that he works the demented straight-man dynamic, scoring some laughs for himself while never hogging the frame and devaluing his co-stars.

As the eager but dim-witted Mike Pancake, Dave Franco turns in a legitimately awesome performance, tackling a type of character he’s never really touched before and, instead of holding back, he absolutely owns it. There’s a lovable buffoonery to him that is absolutely irresistible, and he somehow has the ability to use his good looks like a superpower, available when he needs them but concealed when the scene calls for something goofier. Wilkinson, on the other hand, brings some much needed tragedy to the proceedings, with a character so trapped in his own life, you can’t help but want to laugh and give him a hug, a reaction that perfectly contrasts Franco’s antics, which often evoke a reaction of pure bafflement.

All in all, Unfinished Business is far from the worst experience I’ve had in a movie theater in the past month, let alone the past year. I laughed more than enough times and, although this is not a spectacular film, it doesn’t forget to remind us that five minutes means a lot of different things to a lot of different people, especially when comparing a business with three employees dealing with one that has 300 thousand. However, it also benefits from being genuine in unexpected ways, especially in regards to a tired subplot involving Dan’s overweight son that actually ends up being kind of touching. Or how Mike Pancake’s obvious incompetence only makes way for his unceasing dedication. It’s moments and character quirks like these that keep Unfinished Business from being a total waste of time, which seems like a fair enough compliment to give.

Josef Rodriguez is a writer, filmmaker, and musician living in New York City. He is often labeled as "that guy who didn't love Boyhood" and he finds himself liking Harmony Korine films more than he likes his own friends. When he's not stressing over turning in reviews on time, Josef can be seen playing guitar, watching "Spring Breakers," or trying to write the next great American movie.
You might also like
Dave FrancoNick FrostSienna MillerTom Wilkinson

by Taylor Sinople on February 4, 2014
An unexceptional construction worker mini-figure (or “Lego guy”) named Emmet (Chris Pratt) lives day-to-day, decision-to-decision following the instructions that inform everyone in the Lego universe on how to live and behave. He buys his $37 coffee, he goes to work, he builds skyscrapers only to tear them down again, and he’s REALLY happy about it. […]

by Taylor Sinople on June 6, 2013
Movies and magic aren’t so different. Whether it’s watching a film or enjoying a magic act, there exists an important ratio of give-and-take between the audience and the magician or filmmaker. The performer or filmmaker takes from the audience a certain suspension of disbelief, and in return produces a worthwhile and compelling experience. If the take […]
Comments
Leave a reply
Add Comment Register

END_OF_DOCUMENT_TOKEN_TO_BE_REPLACED
Taylor Sinople Picks: The 16 Best Films of 2016
Form and Function in Alex Ross Perry’s “Queen of Earth&...
Digging for Fire and Unexpected: Husband and Wife Process Parenthoo...
Every Thing Will Be Fine 3D Review