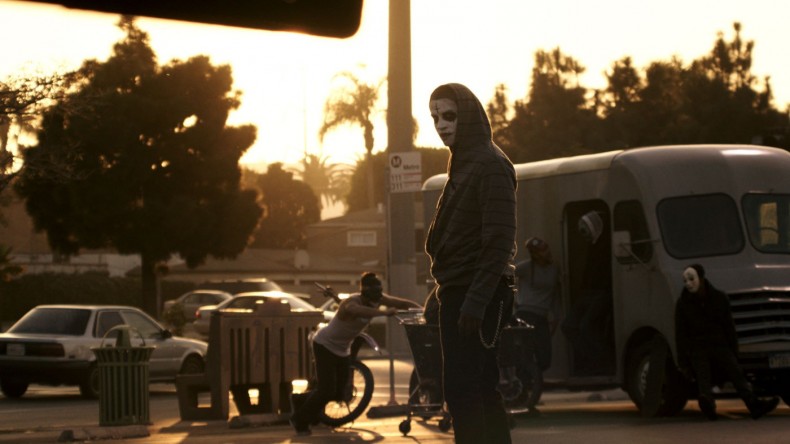 “The Purge: Anarchy” is a faster, funnier, scarier, and better film than its 2013 predecessor, building on the endlessly fascinating concept that brought the original film so much of its initial hype.

There must be a statistic somewhere that compares the most universally hated films that have the greatest profit margins. If so, James DeMonaco’s “The Purge” may very well be number one. Released in 2013 by Blumhouse Productions – which has been responsible for every “Paranormal Activity” film, among others – the film was met with backlash from both critics and audiences, who awarded the film with a spectacularly mediocre ‘C’ Cinemascore grade. However, the film went on to gross nearly $90 million dollars worldwide on a $3 million dollar budget.

What those numbers don’t tell you is the ugly truth: after its first weekend, “The Purge’s” weekend average dropped nearly 72% after its relatively strong $43 million dollar opening, a staggering plummet that told Blumhouse everything it needed to know. Equipped with a more suitable budget, DeMonaco has returned with “The Purge: Anarchy,” a sequel to his much-maligned sophomore feature that gives audiences the dystopia they were promised the first time around.

The year is 2023. The United States, having adopted a heavily amended Constitution drafted by the New Founding Fathers of America, is technically the safest place on Earth. Crime is now a fraction of what it once was, homelessness and unemployment continue to decline, and there are fewer people below the poverty line than ever before. For all intents and purposes, the United States is a place of perfection, all thanks to the annual Purge, a yearly cleansing of the soul in which any crime, including murder, is totally legal for twelve continuous hours.

Planning to take advantage of his freedom to purge, Sergeant Leo Barnes (Frank Grillo) is seen gearing up and finding protection in his heavily armored car. His motives aren’t initially clear, as he doesn’t seem intent on killing anyone, but he is undeniably a man with a purpose. Meanwhile, Shane (Zach Gilford) and Liz (Kiele Sanchez), a couple on the fringe, are driving home when their car suddenly stops working in the middle of downtown, a hotbed for heavy purge activities. Finally, mother/daughter team Eva (Carmen Ejojo) and Cali (Zoë Soul) are forced from the safety of their own home when a group of heavily armed gunmen enter their home and drag them out into the streets with the intention of giving them to a cold-blooded killer known only as Big Daddy (Jack Conley).

Barnes, who just happens to be driving by during the kidnapping, is able to save both Eva and Cali just as Shane and Liz approach Barnes’ car and hide in the backseat. Suddenly forced to stick together when Big Daddy shoots out Barnes’ engine with armor-piercing bullets, the mismatched team fights their way through a city full of homicidal maniacs who prey on the weakness of the unprepared.

My credibility with cinephiles is often examined under great scrutiny when I confess that I am, in fact, quite a big fan of the original “Purge” film. Anchored by two effective lead performances by Ethan Hawke and Lena Headey, “The Purge” is an economical home-invasion thriller that does its best with a severely limited budget of only $3 million dollars. Watching the film, one can tell that it’s not quite the film director James DeMonaco wanted to make, but he does the best with what he has, and the film is both stylish and self-aware in a way that justifies its existence.

But as much as I did enjoy “The Purge,” there’s no denying that “The Purge: Anarchy” is a far superior film. DeMonaco writes and directs the film with a better ear for dialogue and a better eye for grimly lit sets that subtly heighten the tension to an unbearable degree. Certain set pieces, like a claustrophobic shootout in the home of Eva’s family-friend, establish DeMonaco as, at the very least, one of the most interesting new voices in action filmmaking. There are a couple hiccups throughout, including a first act comprised mostly of extreme close-ups, but when the Commencement horns blare throughout the city, there’s no time to slow down.

DeMonaco has proven himself, in both “Purge” films, to be a director who understands the value of simple characterization. He appreciates that audiences watch these films to be entertained by the violence, and maybe a decent amount of social commentary. It’s with this in mind DeMonaco’s greatest success as a writer becomes his refusal to bog down his characters with expositional dialogue that’s both unnecessary and amateurish. By dropping the audience into the middle of a conversation, the middle of a conflict, the middle of a life, “The Purge: Anarchy” begins on the tail end of certain discussions that then become recurring issues throughout the film.

As a result, the necessity of the characters remain intact; we’re always left wondering what the conflict is internally and externally. And DeMonaco’s refusal to indulge the Do’s and Don’t’s of Screenwriting 101 allows him to write the film on his own terms. Instead of plopping a group of disposable stock archetypes into this situation, the script is prepared with characters that, yes, are prone to poor decision-making skills, but are also developed enough to justify their decisions in a way that makes the film all the more exciting. The film is written to scare, provoke, and enrage, but never at the expense of character development that audiences can really get behind and a story that stays true to its title without letting its reach exceed its grasp.

Take, for instance, the character of Cali, a teenaged activist who is closely following an anti-NFFA group led by a Black Panther-type leader named Carmelo (Michael K. Williams). There are many instances in the film where Cali does something very, very stupid, including one scene where she calls out to a gun-wielding neighbor who is searching for her and mother, threatening to shoot him with guns she doesn’t have, thereby swiftly revealing their location and putting them both in grave danger. In any other film, I would have been quite upset to see this display of idiocy make its way to a movie screen. Yet, DeMonaco is able to get away with it based on Cali’s personality, that of a young person searching for a cause and attempting to establish dominance over her own life, regardless of how misguided it ends up being.

It’s easy to dismiss this as bad writing, and I’m really not trying to defend the director’s debatably poor narrative choices, but it is apparent that DeMonaco has attempted to develop his five characters in a way that gives them a little more personality than what is absolutely necessary for a film like this. And as a result, the performances are better and, more importantly, the movie is better. None of this would be half as good without the dependability of characters we can root for and personalities that stay consistent throughout the entire film, instead of ones that become schizophrenic in the way they change based on what the scene requires.

Frank Grillo, in particular, gives a career best performance as Leo Barnes, the tough-talking, bona fide badass who leads his group of ragtag survivors to safety through a city engulfed by genocidal chaos. In his first role as a leading man, Grillo brings the right amount of brawn, brains, and emotion to a role that could have easily been over-acted by a less competent performer. Instead, Grillo is the glue that holds “The Purge: Anarchy” together, helping it stay on track during scenes when it could have succumbed to the implications of its subtitle, and not in a way that would have been enjoyable for anyone.

This does raise an important question, though: Does “The Purge: Anarchy’s” ultimately anti-violence message excuse the fact that it is, in fact, a horribly violent film, one that includes some of the most stomach-churningly graphic things I’ve seen in recent memory? Of course, any anti-violence film must almost be more violent than the work that it’s condemning, as evidenced by Michael Haneke’s “Funny Games,” among others. However, I’m not so sure that “The Purge: Anarchy” can hide under the guise of high art when it’s attached to Michael Bay, who produced the film, and Universal Pictures, a major production company that is responsible for releasing a plethora of mindlessly violent films every year.

There’s no denying that “The Purge: Anarchy” has a firm head on its shoulders, and I think it’s a testament to DeMonaco’s directing that some of the film’s most violent scenes are as viscerally unsettling as they are. But the United States is a country with a thirst for blood. We crave cinema that depicts utter catastrophe. We cheer, hoot, and holler when the bad guys are torn, piece-by-piece, in ways that I wouldn’t wish upon my worst enemies. It’s with this in mind that I ask these questions. I have no doubts that “The Purge: Anarchy” achieves what it sets out to. But will the desensitized masses digest both the violence and the commentary the film makes on American society without ignoring one or the other?

It’s a dubious prospect at best, and I fear that the film will not get the credit it deserves until its inevitable rediscovery as a cult classic a couple decades from now. Though the film is set in 2023, “The Purge: Anarchy” is a film that deserves to be seen, digested, and dissected now. Though it may not appear to be much to the jaded critics who write off the great work being done at Blumhouse, and really any other production company in Hollywood that focuses on horror films, I’m getting tired of horror movies not being taken seriously until many years after their original theater runs. I know, this is nothing new, and I should just get in line with everyone else. But critics and audiences alike really need to think about when they might want to consider horror films as an art form that’s different from the constructs of conventionally “great” cinema. Who knows, by then it might already be too late.

END_OF_DOCUMENT_TOKEN_TO_BE_REPLACED
Taylor Sinople Picks: The 16 Best Films of 2016
Form and Function in Alex Ross Perry’s “Queen of Earth&...
Digging for Fire and Unexpected: Husband and Wife Process Parenthoo...
Every Thing Will Be Fine 3D Review