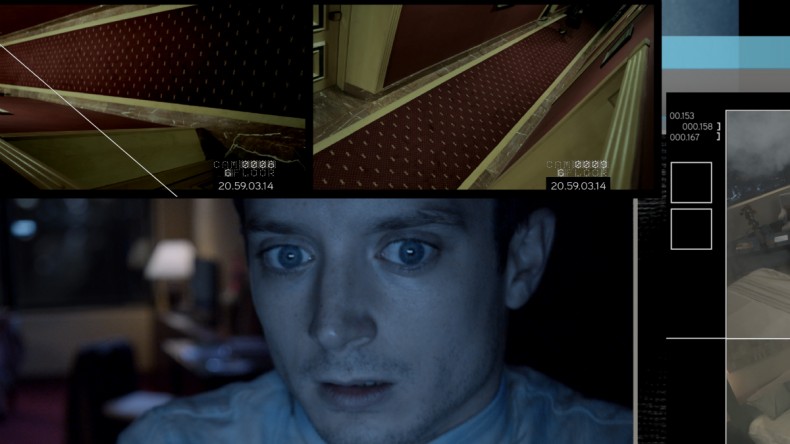 Nacho Vigalondo’s “Open Windows” has many opportunities to make a compelling statement about the nature of celebrity in the digital age, but it drowns itself in too many unnecessary plot twists and features a series of poor supporting performances, even if it is one of the most visually innovative films of the year.

It was only a matter of time before somebody would stage an entire film within the confines of a computer screen, and that movie is “Open Windows,” written and directed by “Timecrimes” auteur Nacho Vigalondo. The film stars Elijah Wood as Nick Chambers, an unassuming blogger who is flown to Austin after winning a contest to have dinner with Jill Goddard (Sasha Grey), a young Hollywood starlet who’s in town promoting her latest film.

While at the hotel room, Nick watches a press conference in the hotel’s ballroom from a live feed posted online. Nick runs a fansite devoted to pictures of Ms. Goddard, and he’s busy snapping screenshots of the press conference when a mysterious caller contacts Nick through his computer. The voice, with no accompanying face, tells Nick that the contest has been cancelled, and he and the rest of Jill’s team are working to rectify the situation. Nick waits patiently, and before he knows it, the voice, who calls himself Chord (Neil Maskell), has given Nick access to the camera on Jill’s phone, as well as a number of surveillance cameras in and around the hotel where Nick is staying.

Things progress at an alarming rate until Chord wraps Nick into a kidnapping plot that may leave him to blame. Throughout this ordeal, Nick is also contacted by a mysterious hacking organization known as Triop, led by Pierre (Adam Quintero), who offer their services to Nick, mistaking him for a legendary hacker known as Nevada. Before he knows it, Nick is pinned as the man responsible, and becomes involved in blackmail, high-speed chases, and, if he isn’t able to save Jill in time, murder, while searching for Chord and the real Nevada in an attempt to clear his name.

Vigalondo’s film comes equipped with one of the year’s most creative visual palettes, tight editing by Bernat Vilapana (who has previously cut three Guillermo Del Toro films), and a strong central performance by Elijah Wood, who continues to impress in a steady stream of post-“Rings” genre films. In its opening minutes, Vigalondo establishes that he has something to say about the bridge between person and persona, the nature of the 21st century celebrity, and the increasingly plausible threat of domestic cyber-terrorism, made all the more relevant by a recent celebrity epidemic, the hilariously-titled “Fappening” leaks that shocked the world with nude photos of almost every young actress in Hollywood.

The Spanish-born director has always been a fan of high-concept thrillers, starting with 2007’s “Timecrimes,” which earned Vigalondo a Next Wave award in that year’s Fantastic Fest. To make this as clear as possible, “Open Windows” is no “Timecrimes.” It floats around a lot of great ideas, offers viewers an original visual conceit, and teeters on greatness more often than not. Unfortunately, Vigalondo seems to have little faith in the textual and subtextual content of his film, and he forces unnecessary plot twists into a film that, by the 80 minute mark, has dared more than once to be some of the most fearless horror filmmaking in recent memory.

Additionally, “Open Windows” features some truly horrid supporting performances that just don’t measure up to the work being done by Elijah Wood and Sasha Grey, who has continued to give occasionally one-note but undeniably strong performances since her mainstream debut in 2009’s “The Girlfriend Experience.” The traditional British-voiced-villain is a bit of an annoyance, but Neil Maskell has a chance to develop the performance more once he appears on-screen in the flesh, completely subverting the expectations set up by his menacing vocal work.

The problem with “Open Windows” is that, every time it offers one good idea, it sets itself back with three more bad ones, and the film never establishes a consistent tone or collection of concepts that coheres into anything great. There’s no denying the entertainment value on display, and Vigalondo is able to build a lot of great tension throughout, despite the fast-paced nature of the story. But when nearly every supporting performance falls flat, and when the twist ending is so insanely implausible that it negates an already implausible movie, “Open Windows” becomes less of the fascinating social commentary that it was, and more of an uneven, jarring, and overwritten film that could have used a couple of notes from the less-is-more school of thought.

Fans of the director or of innovative visual and thematic approaches will, like myself, find lots to love here. But the amount of disbelief that Vigalondo requires to be suspended is far too much. He already asks a lot from his audience by staging his film entirely on a computer screen, but the added stress of these constant contrivances is simply the straw that breaks the camel’s back, and the film suffers from a refusal to let its merits work on their own. Bad acting is commonplace in the genre, so it’s easy to forgive that if the film itself is great.

But by ruining what is already an interesting story, Vigalondo essentially shoots himself in the foot, more so because almost every other technical aspect of the film is executed extremely well. Elijah Wood continues to give strong performances, offering viewers an extremely wide range of roles from which to choose. Doubling as an Executive Producer, Wood’s apparent faith in the project, and his subsequent performance, is admirable, but Vigalondo’s film never generates the commentary, the scares, or the impact that it so obviously wants to.

Josef Rodriguez is a writer, filmmaker, and musician living in New York City. He is often labeled as "that guy who didn't love Boyhood" and he finds himself liking Harmony Korine films more than he likes his own friends. When he's not stressing over turning in reviews on time, Josef can be seen playing guitar, watching "Spring Breakers," or trying to write the next great American movie.
You might also like
Elijah WoodNacho Vigalondo

by Taylor Sinople on January 8, 2014
Before the Ramones, before punk, there was a band called Death. Three Detroit-area African American brothers created a proto-punk band in their bedroom in the early 70’s but were unable to break through to any form of success due to their off-putting band name and refusal to bend to a label’s demands. Nearly forty years […]
Comments
Leave a reply
Add Comment Register

END_OF_DOCUMENT_TOKEN_TO_BE_REPLACED
Taylor Sinople Picks: The 16 Best Films of 2016
Form and Function in Alex Ross Perry’s “Queen of Earth&...
Digging for Fire and Unexpected: Husband and Wife Process Parenthoo...
Every Thing Will Be Fine 3D Review