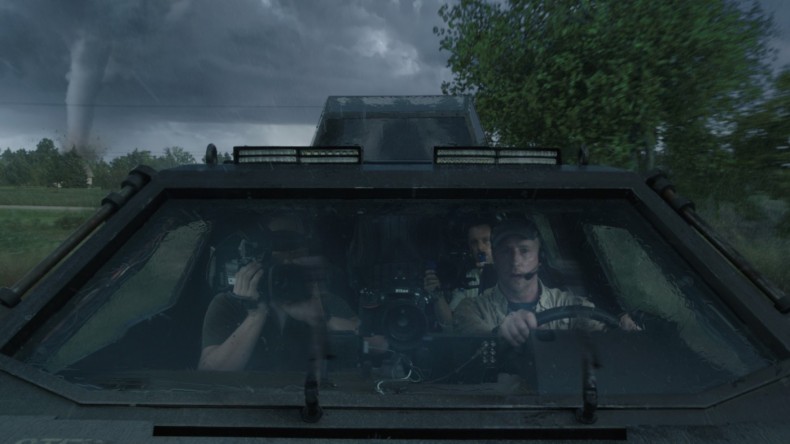 Editor’s Note: “Fairly pleasurable” vs. “insensitive and offensive:” two of our contributing writers lay out their thoughts on disaster thriller “Into the Storm.” Which side do you fall on? Leave us a comment to join in the discussion!

Although it’s entirely too kind to its characters to be a true disaster film, “Into The Storm” is a mostly entertaining ride with some impressive special effects.

I’d like to talk about “Lucy” for a minute. Granted, it’s not the film I’m reviewing here – I haven’t even seen it, to be honest – but the discussion surrounding it since its release has intrigued me. Skim through any review of the recent Scarlett Johansson star vehicle and there’s a good chance you’ll find one adjective or another describing how insane it is. That’s where the consensus ends, though, as opinions seem to differ vastly on whether director Luc Besson leaned into that madness too much or not enough, and if the resulting film is good or bad because of it. This uncertainty about the aesthetic priorities of genre films ties in nicely with my “Into The Storm” musings.

Looking at the résumé of the director, Steven Quale, one thing stands out among a sparse list of credits including a “Final Destination” sequel and some second unit work for James Cameron: a three and a half hour TV movie called “Superfire.” Why does that stand out, you ask? Well, because “Into The Storm” is exactly the product you should anticipate when you give a bigger budget to the guy who directed “Superfire,” and certain expectations come with that territory. Quale manages to deliver on some of those promises but struggles majorly with the same “Lucy” problem of embracing the sheer chaotic lunacy.

When your trailer boasts a tornado that catches on fire, there shouldn’t be much else you need to do before unleashing the wrath of Mother Nature on your cinematic world. In fact, the only reason “Into The Storm” takes a little while to get going is because it bends in service to a questionable found-footage style, taking time to create reasons for hand-held cameras to be littered around and ready to catch the storms from any angle. The characters holding said cameras are constructed as if by darts thrown at other movie scripts, making them impossible to care about. Their flimsiness would be more palatable if the film didn’t so vigilantly protect them – by the third or fourth near miss it becomes clear that there aren’t any real stakes surrounding them, no matter how many dead mothers or young daughters or college internships make up their half-baked backstories. Call me a misanthrope, call me a sociopath, but watching felt like 30 minutes of constructing perfect cannon fodder followed by an hour of refusing to actually fire the cannon.

There are some kernels of goodness amidst the hackneyed ancillary drama, perfectly spaced out to hit you with a wave of relief just when you’re ready to give up on the movie. Most of those moments belong to the titular storms or to Matt Walsh, who seems to be the only one who realizes that he’s in a black comedy parading as a disaster thriller. A large cow statue is hurled through the air in homage to “Twister,” an obvious spiritual predecessor. Walsh’s character gets a great moment of (wholly unearned) payoff at the end that is one of the most peacefully euphoric scenes in recent memory. The sound and visual effects are well done and, in a few shots in particular, Quale even strikes a sense of enormity that is on par with another of this summer’s jumbo-sized thrill rides, Gareth Edwards’ “Godzilla.”

Despite several pronounced eye rolls on my part, my experience was fairly pleasurable. In fact, when the film kicks into high gear, it doesn’t let go of you until it’s good and ready, at which point you just have to wait out the goofiness and pray for another funnel cloud. Maybe “Into The Storm” is onto something after all, albeit accidentally – could interspersing scenes that are just plain bad heighten the disaster porn entertainment value? I’m not sure, but I do know that by the end I was glad that nature seemed to have a dependable way of repeating itself.

“Into the Storm” is an offensive piece of disaster filmmaking with no discernible characters and a threadbare plot.

Fifteen years ago this summer “The Blair Witch Project” (Eduardo Sanchez and Daniel Myrick) premiered as a one-of-a-kind found footage film. Since then, the genre seems to be growing exponentially, yet it has certainly experienced significant growing pains. For every successful film such as the tense monster movie “Cloverfield” (Matt Reeves), there a dozen inadequate releases, like the formulaic and bland, slasher, home-invasion picture “The Poughkeepsie Tapes” (John Erick Dowdle). The newest entry in the canon in the genre, “Into the storm,” unfortunately follows in the trend of the later.

As Steven Quale’s (“Final Destination 5”) picture opens it takes a moment to adjust to the visual language. The cold open of the film plops the audience into a world of confusion, because the found footage conceit wasn’t widely disclosed in marketing campaigns. The opening starts the picture off with a moral queasiness that is continued for the duration. The scene, for no discernible reason, puts the lives of four teenagers in danger and kills them off to merely begin with an action sequence. This is troubling since it plays zero part of the larger story and treats the lives of teenagers like a plot point.

The central focus of the plot follows three different groups of people whose lives all intersect during the storm of the century in a small town in the Midwest. Gary (Richard Armitage of “The Hobbit Trilogy”) is an assistant principal who must save his oldest son Donnie (Max Deacon of TV’s “Hatfields & McCoys) who is stuck on the outskirts of town. Allison (Sarah Wayne Calles of TV’s “The Walking Dead”) is a meteorologist for a team of storm chasers who is constantly at odds with her boss Pete (Matt Walsh of TV’s “Veep”). The third and most aggressively stupid storyline follows two amateur brain-dead storm chasers, Donk (Kyle Davis of TV’s “Enlisted”) and Jon Reevis (Jon Reep of TV’s “Eastbound and Down”) who drive a beaten up truck known as “Twsta Chasers.”

The first tornado breaks out at Gary’s school graduation ceremony and then continues to ravage through the town. This storm is the first in a series that devastates the town and the surrounding areas. This is where the film shows the clear dichotomy of the inanity of the script and the rather impressive special effects. Many filmmakers in today’s era use substantial CGI that muddies the screen with a clearly manufactured image. Quale opts to use as many practical effects as possible, which allows the audience to watch the actors actually dealing with the elements, adding a refreshing retro feel.

Eventually these three groups meet in a tense sequence in the heart of town. Calles’ character unsuccessfully implores Donk and Reevis to get to safety. This is where Gary and Allison’s plots cross and they set out to rescue his son. The predictable structure of the story follows the cycle of storm-setback-progress-repeat.

The culmination of the storm series is a massive tornado that looks to be about three miles wide as it ravages through the landscape at three hundred miles per hour. Though it is the climax of the story, this is the least effective set piece because the actual tornado is presented as a CGI mess.

Though many of the set pieces are rather effective (and one is particularly effective as two characters record their testimonials), a string of set pieces does not a movie make. The biggest weakness lies in the scrip, which is highlighted whenever a character has to open their mouth. The screenwriter, Jon Swetnam (“Step Up All In”) invests nothing more than banal character tropes that struggle to give the audience some connection to the cast. His characters lack specific traits or human emotions which makes it hard to invest in their survival.

A large problem with the film is the found footage conceit. The opening scene is filmed strictly on a shaky cell phone camera, but as the film progresses the scenes don’t hold to the logic of found footage. Where are the aerial shots of a tornado coming from? Who is following cars during the storms? Quale does, however, make a few smart choices with this style of filmmaking. Because all of the main characters are professional or amateur filmmakers Quale bypasses the common problem of found footage characters being unable to hold a steady, well-framed shot. By surrendering the found footage technique and then abandoning it on a shot to shot basis he has left gaping holes in the film though.

What makes this movie something of a disaster is that it takes real world anxieties and exploits them in the least sensitive manner. On April 27th, 2011 a tornado ripped through Tuscaloosa, Alabama and then a month later a tornado levelled the town of Joplin, Missouri. I bring this up to highlight all the stories that occurred on those days of people trying to survive the unpredictable brutality of nature. Quale has made a film that is only about the brutality and preys on the fears of conservative American values and the Midwestern tendency towards religious fervor. The closing sentiments of the film, with tattered American flags waving and patriotic music, are that of God and Country. The script even evokes some iteration of the trite phrase, “If good people like you and me.” But, then Donk and Reevis show back up one last time to defecate on that sentiment. The story at its core is a heartland horror story; sadly there is no heart and so the all the parts seem like sound and fury, adding up to nothing.

Zack is a software developer from Halifax, Nova Scotia moonlighting as a cinephile - until the weekend, when those roles reverse. He can often be found thoughtfully stroking his beard or thoughtfully stroking his cat. Despite remaining in the sitting position almost exclusively, he occasionally makes time to be bent into other shapes during jiu jitsu practice. You can aggresively shout your opinions and objections at him via Twitter or in person (anywhere beer is served).
You might also like
GodzillaLucyRichard Armitage

by Vivek Suvarna on May 20, 2014
Legendary and Warner Bros. have confirmed plans for a sequel to Godzilla (2014) via Deadline.com Godzilla’s return to the big screen has proved massively successful. His return was greatly anticipated by fans as 2014 marked the end of Toho’s 10 year break imposed on the character in 2004. Producer Thomas Tull had hinted in a […]

by Josef Rodriguez on May 18, 2014
“Godzilla” has moments of greatness, but they don’t add up to create a wholly original or enjoyable viewing experience, especially for die-hard fans of the original film.
Comments
Leave a reply
Add Comment Register

END_OF_DOCUMENT_TOKEN_TO_BE_REPLACED
Taylor Sinople Picks: The 16 Best Films of 2016
Form and Function in Alex Ross Perry’s “Queen of Earth&...
Digging for Fire and Unexpected: Husband and Wife Process Parenthoo...
Every Thing Will Be Fine 3D Review