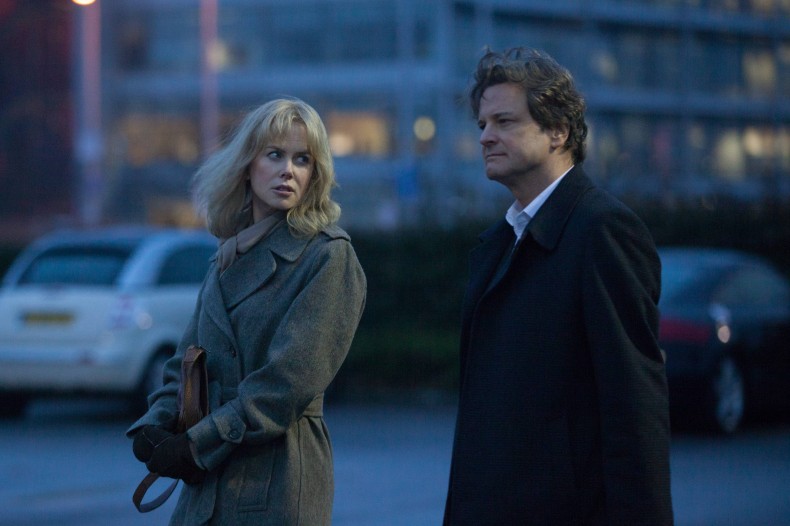 Featuring excellent performances from the likes of Nicole Kidman, Colin Firth and Mark Strong, "Before I Go To Sleep" will please those who are expecting little more than an average, competently-made mystery thriller.

Christine Lucas (Nicole Kidman) wakes up to find that she doesn’t recognize the man sleeping beside her in bed; worse, when she looks in the mirror, Christine doesn’t even recognize herself. The man is her husband of fourteen years, Ben (Colin Firth); slowly, patiently, he tells Christine that as a result of a car accident several years ago, she suffers from an atypical amnesia that causes her to forget everything she has learned that day. When Ben leaves for work, however, Christine discovers a video-recorder upon which she finds a film of herself warning against trusting Ben.

If you are thinking we’ve been here before with Guy Pearce, you would be right, there is more than a shade of “Memento” going on here as Christine tries to figure out just how much of what she is told by the people around her each day is really true.

Directed and written by Rowan Joffé (“Brighton Rock,” “The American”), “Before I Go To Sleep” initially offers an intriguing exploration of memory and identity, with almost every character coming across as simultaneously sinister and sincere. Not an easy task, but it does mean that many of the secondary characters do not have much depth to them, as they merely act as pawns to the mystery, and not as fleshed-out characters. This leaves Kidman to carry the majority of the film herself, and she does it well. She is also adept at keeping the audience’s sympathy levels high for Christine without descending into sentimentality. You really feel for her as she relives the awful moments of heartbreak from her entire lifetime each day as if the bad news were fresh, emotional blows.

Soon the story transitions into the realms of the ‘domestic noir’ thriller, as Christine’s paranoia begins to alter into tangible threat. The already established tone ensures that the film thrives on this change; the drab ordinariness of the suburban London setting and its rain-soaked streets of greys and washed-out blues add considerably to the creeping sense of loneliness and distrust as Christine’s life becomes a pattern of extreme terror. Also the film acts as a disturbing analogy for the isolation and dependence that an abusive relationship can result in for women (the first morning we see Christine, she has a bruise on her face). The suspense comes in the question of whether we can trust Ben either, but we want to: Firth is so very poignant as a man suffering in a way we can only just begin to imagine. Furthermore, we have Dr. Nash (Mark Strong), a researcher studying the brain who says he can help Christine, but also warns her against telling Ben that she is secretly meeting with him during the day. Instead she must keep a video diary on the aforementioned video-recorder – a higher-tech equivalent of Guy Pearce’s ‘Polaroid and tattoo’ method in “Memento.”

Frustratingly, this film is highly coincidental, that is, the events of the story must occur in such a specific way that it results in quite the absurd string of instances. This realization forces the narrative to completely fall apart, with such flimsy plot justifications it collapses under the weight of ludicrousness. To unravel the numerous lapses in logic and credibility that keep this plot suspended — most of them taken from the source novel of the same name, a bestselling thriller by S. J. Watson from which the screenplay makes few deviations — would be to reveal some major spoilers. It is fair, however, to note that the film never answers the burning question of how Dr. Nash, without the knowledge or consent of the extremely protective Ben, came to treat Christine in the first place (also, why do they keep meeting up in empty parking lots, if not simply to honor the tradition of the thriller genre?).

Credit must be given to the design team however; as the ominous tone builds to a genuinely shocking climax, Christine’s surroundings of grey colored walls and skeletal, wooden furniture create the sense of a home that, both physically and psychologically, has never quite been her own.

On the whole, whether you managed to guess the ending or not, the thrill of the climax is more than decent and will carry you through the action-packed delivery.

Jess is a 21 year old university student studying English Literature. Born and raised in England, she's an aspiring writer and film lover, with a strong affinity for cats.
You might also like
colin firthMark Strongnicole kidman

by Josef Rodriguez on February 8, 2015
Although its wanton violence is an arguable contradiction to many of its core themes, “Kingsman: The Secret Service” is a fun, hilarious, and stylish action extravaganza from one of the most creative voices working today.

by Taylor Sinople on July 24, 2014
Woody Allen, sharp as ever, is having more fun than ever with "Magic in the Moonlight," a small but well-constructed film about real-world magic.
Comments
Leave a reply
Add Comment Register

END_OF_DOCUMENT_TOKEN_TO_BE_REPLACED
Taylor Sinople Picks: The 16 Best Films of 2016
Form and Function in Alex Ross Perry’s “Queen of Earth&...
Digging for Fire and Unexpected: Husband and Wife Process Parenthoo...
Every Thing Will Be Fine 3D Review