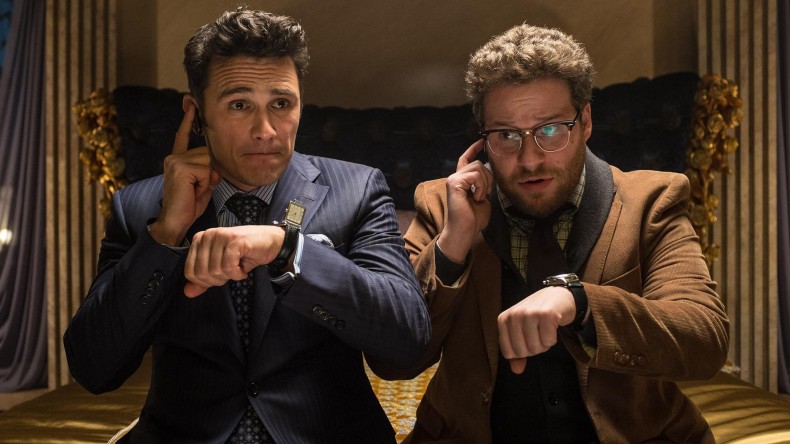 "The Interview" is a funny, smart, touching, and well-crafted sophomore feature from Seth Rogen and Evan Goldberg that totally lives up to the hype.

It’s already impossible to separate Seth Rogen’s sophomore effort, The Interview, from its political controversy. But, when one actually sits down to watch the film, it becomes apparent that a comedy like The Interview couldn’t even exist without it. Like many of co-star James Franco’s most audacious projects, it’s a film that exists beyond the limits of the screen and instantly molds into the world in which it was produced. Like a handful of films – Breathless, Schindler’s List, and Boyhood come to mind – before it, The Interview has already made its mark on history.

But, really, how is the movie? Being swept up in all this excitement has the ability to detract from the film itself, but The Interview still emerges as the most audacious piece of evidence to come as a result of this ordeal, and we have Rogen and Goldberg – who seem much more confident behind the camera this time around – to thank. Again, the directors tackle very relevant fears in the cultural sphere of conservative America. Their first feature, This is the End, brilliantly tackled the idea that all of Hollywood would be left to burn in the event of the apocalypse, before devolving into a barrage of unfunny dick and fart jokes after the opening third.

The Interview, however, benefits from a more plot-driven approach to its story, and the result is a movie that doesn’t allow any one joke to outstay its welcome. At 112 minutes, The Interview is a surprisingly tight, consistently funny, and suitably offensive action-comedy that isn’t quite the destructive blow to the North Korean government that everyone wants it to be. Instead, we’re treated to an above-average Rogen/Goldberg collaboration that’s only as smart as it needs to be.

Anyone expecting anything more should probably refocus their expectations, because the film offers plenty of things to love. As the two buffoons commissioned to kill the leader of North Korea, Franco and Rogen absolutely kill it. James Franco’s manic turn as celebrity talk show host Dave Skylark is one of the year’s most inspired performances, and Seth Rogen turns out to be an agreeably low-key foil to Franco’s hilarious mugging as his best friend and producer Aaron Rapaport. There are few actors working today who have as consistent a chemistry as Franco and Rogen. The trick at this point is to not let it become stale, as their subtly gay bromance schtick is the default for all of their collaborations.

Perhaps the duo’s greatest strength is that The Interview is decidedly not a stoner film by any stretch of the imagination. All comparisons to Pineapple Express are almost completely null, and the tension between the characters doesn’t arise as a result of copious drug use, but from the strength of their friendship and whether or not it, or they, can survive the situation they’re in. It’s not entirely dissimilar from their other collaborations, but they dynamic is definitely a refreshing change of pace, and it helps that the humor comes with a decent amount of social commentary that, like in This is the End, feels neither heavy-handed nor overpowering.

Yet, as consistently funny as they are, nearly every scene in the film’s second half are stolen by Randall Park as Kim-Jong Un and Diana Bang as Sook, Kim’s second-in-command. In what might be the oddest romantic pairing in comedic history, Sook and Aaron develop feelings for each other throughout the film, and their chemistry rivals the bromance that’s sparked between Kim and Dave when the boys arrive to the DPRK. As a lover of margaritas and Katy Perry, Park instills an uproarious and affecting pathos to the character that results in many of the film’s biggest laughs. His portrayal is not exaggerated by any means, and viewers who complain that the film portrays Koreans inaccurately should turn to Park’s work in the film and reconsider their evaluation.

Another unexpected strength is in the inclusion of DP Brandon Trost, who was also one of the best things about this year’s Rogen vehicle Neighbors. His inspired work in The Interview holds up alongside the most visually accomplished films of the year, and would get some more recognition in a just world. Like Lawrence Sher, Trost shoots comedy with the dignity it deserves instead of just bathing everything in unnecessary wide shots and flat color schemes. Trost is completely aware of the kind of comedy he’s shooting, and he does so accordingly, ensuring that none of the film’s visual elements contradict the intensity and occasional darkness of the first two acts, or the action-packed catharsis of the film’s final sequences.

Of course, Rogen’s films as a director are not the laugh-a-minute riots that most audiences have associated with the Apatow clan, but The Interview represents a marked improvement in quality from Rogen’s directorial debut. It’s certainly the more controversial of the two, which is saying a lot when comparing it to a raunchy comedy about the apocalypse, but it doesn’t take much to imagine why Sony supposedly hated this movie. It’s not for everyone, and it probably cost the studio a lot more time and money than they thought it was worth, but The Interview is contemporary political comedy at, if not its funniest or smartest, its absolute strangest.

Josef Rodriguez is a writer, filmmaker, and musician living in New York City. He is often labeled as "that guy who didn't love Boyhood" and he finds himself liking Harmony Korine films more than he likes his own friends. When he's not stressing over turning in reviews on time, Josef can be seen playing guitar, watching "Spring Breakers," or trying to write the next great American movie.
You might also like
james francoLizzy Caplan

END_OF_DOCUMENT_TOKEN_TO_BE_REPLACED
Taylor Sinople Picks: The 16 Best Films of 2016
Form and Function in Alex Ross Perry’s “Queen of Earth&...
Digging for Fire and Unexpected: Husband and Wife Process Parenthoo...
Every Thing Will Be Fine 3D Review