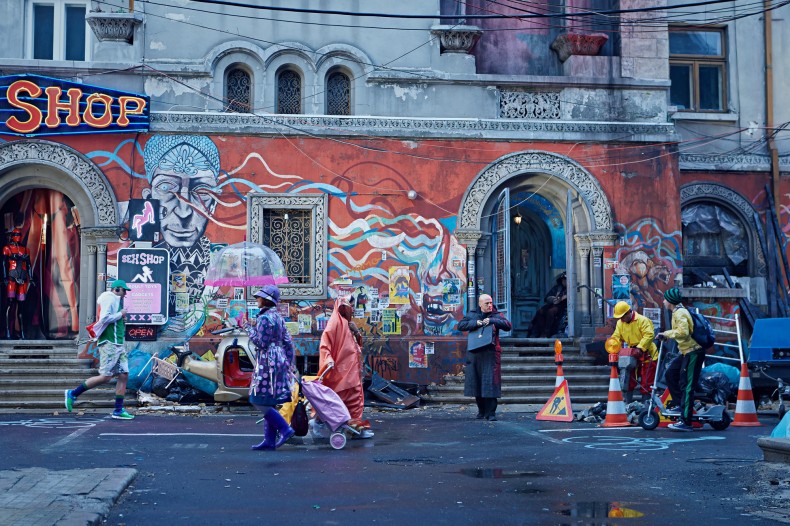 "The Zero Theorem" brings together Terry Gilliam's bold imagination and Christoph Waltz's immense talent for a film that resonates as both a wildly fun watch and a though-provoking piece of science fiction.

In his home, in the remains of a discarded chapel, Qohen Leth works as an entity cruncher for Mancom and waits for his phone call.

If “The Zero Theorem” struggles to draw an audience in its initial, limited theatrical run, it’ll be because of the general lack of context and explanation surrounding the details of the film. What’s an entity cruncher? Who’s Qohen Leth, what’s the deal with this phone call thing? And what the hell is the “zero theorem?” Director Terry Gilliam will answer all of your questions, but not at the start of the film and certainly not before you even see it. I still don’t quite know what entity crunching is. But cinephiles with a fondness for genuinely and totally weird sci-fi can let out a collective sigh of relief: “The Zero Theorem” proves the financially rocky state of film production won’t stop Gilliam from imagining ludicrously detailed, utterly bizarre worlds that play host to surrealism, satire, and frightening glimpses at potential futures.

“There you are, your own number on your very own door. And behind that door, your very own office! Welcome to the team, DZ-015.” Sam Lowry of 1985’s “Brazil” was the face of the fate of bureaucracy as envisioned by 20th century storytellers, and now Qohen Leth is our 21st century nightmare.

He’s a weird guy. Qohen (Christoph Waltz) avoids going out until he absolutely has to. It’s difficult for him, as others often take notice of his total lack of body hair and insistence on the use of the royal “we” when referring to himself. He sits at home waiting for a phone call he believes will provide him, literally, with the meaning of life, until he’s called into work where he carries out a repetitious, urgently paced task on a computer that no one seems to fully understand the purpose of. His supervisor (David Thewlis of the “Harry Potter” films) convinces him to come to a party after work. Qohen actually goes, solely to ask the big boss, Management (played by a surprisingly well-known actor you may want to discover for yourself), permission to work from home. Management does him one better, and assigns him to The Zero Theorem: a potentially endless, maddeningly complicated project that, if completed, could change everything we know about the world.

Since his English-language breakout in 2009’s “Inglorious Basterds,” Waltz has yet to anchor a film as the lead, but does so here with outstanding confidence. It’s true that he may be the most exciting supporting performer of the past half-decade, but in “The Zero Theorem,” we see for the first time that he can extend his captivating presence across an entire feature. He’s worthy of Best Actor nomination here as the eccentric and fascinatingly odd Qohen. This is a performance filled with quirks that aren’t written and subtleties that aren’t caught on first glance. Waltz channels a long history of contemporary workplace frustration and combines it with a palpable sense of social and romantic anxiety to make for a fairly definitive portrait of the hypersensitive recluse in a future age.

Perhaps the most rewarding element of Waltz’s performance is how the character is only strengthened by the inclusion of additional characters. Whether it’s with Qohen’s artificially intelligent therapist (Tilda Swinton), a call girl that takes the time to understand him (Melanie Thierry), or Management’s rebellious fifteen-year-old son, Bob (Lucas Hedges), the back-and-forth dynamics from first-time screenwriter Pat Rushin is about as entertaining a movie experience as one can find this summer. Hedges (“Moonrise Kingdom”) is particularly good as a no-nonsense, pizza-eating, red-headed teenager straight out of something like “The Sandlot” – a hilariously displaced real-world personality amongst all of the gadget-crazed, oddball lunacy.

And yet again, Gilliam’s underrated brand of geometrically ornate, loudly patterned, brightly colored, packed-with-detail production design is a thrill to soak in. If a Gilliam “miss” is a film whose many gears are turning at different speeds, then he has with this one found a perfect sync. Adrian Curelea’s art direction fills the sets of “The Zero Theorem” with flurries of activity – with people, gadgets, colors, and shapes packed into the frame. The claustrophobia and general disorder is captured with Gilliam’s characteristic wide-angle lens distortion and off-balance compositions as photographed by Nicola Pecorini in an aspect ratio that leaves the rounded edges of the frame on-screen.

Gilliam is the rare living, working visionary with the backbone to make a film his way no matter the budget or support. The CGI in “The Zero Theorem,” used when the production design reaches its limits, reveals a bit of the low budget involved, but for the most part this is a stunningly achieved $8.5 million film. There’s just not enough money in that budget to go around properly, suggesting a lot of work went into this film at significantly underpaid rates – a necessary sacrifice given the risk involved in telling this story. And Sony seems to be a total loss for how to promote this thing. Just take a look at the disparity between the promotional posters.

In our current era of dystopian young adult cult phenomena, future-set science fiction has largely become an extrapolation of current trends in technology and society. Like “The Fifth Element,” “The Zero Theorem” is a completely alternative future motivated by an imaginative set of rules and traditions. It’s a world where data is transferred via liquid vials, and television ads follow you down the street on screens that can be applied to any surface.

With all of this imagination, Gilliam does get a little lost in the tragic musings of his main character. For one reason or another, “Zero Theorem” seems to remind a lot of people of “Under the Skin,” Jonathan Glazer’s masterpiece from earlier this year. Glazer’s film seeks similar transcendent revelations on humanity and the universe, but is more tightly wound and narrowly honed than Gilliam’s, and consequently remains the slightly more successful one.

Still, while they may at times be unclear, “The Zero Theorem” has a number of great ideas and images to offer. A shot of a security camera fastened in place of a crucified Christ’s head is alone worth the cost of admission, and look out for an unexpected, very creepy cover of an early Radiohead song. At home or at the theatre, see this film at night. At one point, Qohen begins to get lost in a fantasy, rejecting the reality around him. A good film pokes at that same temptation. Bravo to all of those involved in this daring, bizarre piece of anti-Hollywood surrealism.

by Taylor Sinople on January 27, 2014
Visionary filmmaker Terry Gilliam – responsible for such hit-or-miss sci-fi epics as “Brazil,” “12 Monkeys,” and “The Imaginarium of Doctor Parnassus”- will release his 2013 film “The Zero Theorem” to UK audiences on March 14, 2014 (US release date still TBA). Gilliam returns to his much frequented near-future setting to revisit the type of colorful, […]
Comments
Leave a reply
Add Comment Register

END_OF_DOCUMENT_TOKEN_TO_BE_REPLACED
Taylor Sinople Picks: The 16 Best Films of 2016
Form and Function in Alex Ross Perry’s “Queen of Earth&...
Digging for Fire and Unexpected: Husband and Wife Process Parenthoo...
Every Thing Will Be Fine 3D Review