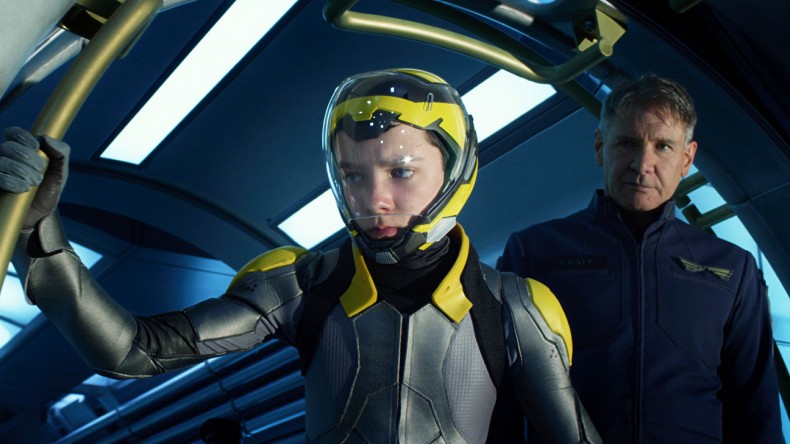 Fumbling its impressive cast and compelling source novel to create one supremely uninteresting movie, “Ender’s Game” is devoid of life and chock-full of poor decisions.

When an attack on Earth by a bug-like alien race threatens to destroy humankind, the International Military turns to the brightest adolescent minds to command the galactic army using their youth as an unconventional tactical advantage. Scowl-faced Colonel Graff (Harrison Ford) heads up the search to find a fledgling leader and stumbles upon Ender Wiggin (Asa Butterfield) – a timid but mentally brilliant boy that Graff suspects has the one-in-a-million disposition to wield enormous power with both ruthlessness and restraint. Ender is recruited into Battle School on a space station where he quickly earns recognition for his strategic genius and is groomed to take over the entire International Fleet in defense of the human race.

“Ender’s Game” has been in some form of development for over a decade. Orson Scott Card’s 1985 novel (notable for appearing on the U.S. Marine Corps’ required Professional Reading list) was initially well received and has only continued to gain momentum. Over the years, drafts of the script have been written and abandoned until Summit Entertainment picked up distribution of writer-director Gavin Hood’s adaptation of the novel. Hood, a South American director known for helming the Academy Award winning “Tsotsi,” uses Ender’s story as a vehicle for teenaged sci-fi spectacle with more brainy discourse than brawny action, and succeeds to limited degrees. The well-intentioned version of “Ender’s Game” that will finally hit screens in November is not a complete failure, but significant problems with script and execution hold the film back and prevent it from finding any distinction among similar sci-fi blockbusters.

Movies like “Ender’s Game” frequently get a bad wrap by critics, which isn’t always fair considering the target audience is teenaged. I’m always on the lookout for a good-hearted film that’s only looking to entertain audiences with some all-out-sci-fi-space-chaos, but it becomes hard to be anything but unforgiving when you bring together an all-star cast that includes Ben Kingsley, Harrison Ford, and Viola Davis, $110 million, and a great source novel and still manage to create an uninteresting film about things as wildly exciting as space travel and cosmic warfare. If Hood had brought this story to the screen a few years ago, perhaps it could have been as original and thought-provoking as it thinks it is, but in a world where “Harry Potter” and “The Hunger Games” have run their course in popular media, “Ender’s Game” doesn’t have much to offer and exists as a less enchanting, empty version of the teen sci-fi model.

Five minutes in and the clichés have piled high. Perhaps the wait has been too long for this adaptation, as most of the setting and props feel dated regardless of the modern CGI coating they’re wrapped in. There’s a chubby bully, an outcast hero, and even a little mechanical implant embedded into the back of Ender’s neck by way of “The Matrix.” The fact that the source novel predates these modern pop culture references doesn’t make the imagery any less tired when we’ve only just recovered from the much better looking “Pacific Rim.”

You could never accuse “Ender’s Game” of lacking conflict; it beats you over the head with it. There’s no time at which the stakes are not at threat-level apocalypse, and the film gets so caught up in its ultra-serious tone that it forgets to provide any sense of wonderment. No matter the dire circumstances, a group of pre-teens are sent into space to attend Battle School – training with high tech weaponry in a zero gravity environment…shouldn’t this be a little more fun? Instead, it’s entirely unsatisfying to see Ender attend the Battle School in a sterile, standard issue movie-spaceship infrastructure for most of the film. There’s never much to look at, even when the camera enters the cosmos surrounding the International Fleet. This just isn’t a living, breathing world, and when it’s all over there’s nothing to tempt your brain to giving a second thought to the lifeless misfire of a climax. Where is the comedy, the drama, the thrills? Movies can be better than this.

The best visual design comes in the form of a combat training game in which battle students team up to face off, using pistols that shoot a freezing agent to tag each other while floating from cover to cover in a massive zero gravity training chamber. This under-dog sports movie subplot finds Ender going from fumbling potshots to firing multiple direct hits while literally spinning in the air with his arms outstretched after only one on-screen lesson. The whole concept of the game is preposterous, with Colonel Graff in large part determining the future military commander of the free world through the kids’ behavior in a series of matches of galactic laser tag. You would think a war fought in space would include some flight training, but the students are only seen practicing close-range shooting and small, squad-based strategy.

Still, there are some redeeming features to “Ender’s Game” that make it recommendable to children despite not offering much for adults. There’s a lot of merit to Ender being a hero to young people. Placed in tough positions outside his maturity level, Ender is forced to make greater-good decisions and decide how he feels about the morality of war. Lead actor, 16-year-old Asa Butterfield (“Hugo”, “The Boy with the Striped Pajamas”), is the best thing about the poorly implemented cast. Sixteen-year-old Butterfield looks the part and plays up the Ender as authentically as he can under the direction of filmmakers that give an actor as great as Ben Kingsley a bland, hackneyed part. Similarly, Academy Award nominated 16-year-old actress Hailee Steinfeld (“True Grit”) has her dramatic talent reduced to an undeveloped romantic interest. Only Viola Davis (“The Help”) as the Major serving under Colonel Graff is challenged with her role as a caring, maternal figure to Ender who is torn apart by the military’s manipulation of the young battle students.

On the technical front, “Ender’s Game” will save you the headache of a 3D transfer (it is only available in 2D), but it’s not shot with IMAX cameras so it won’t take advantage of the additional height of your local IMAX screen, beware of the extra ticket charge – a regular theater will do fine for this one.

“Ender’s Game” is a great choice for the 10-13-year-old range because of its anti-war message, but it lacks heart and is an overall forgettable, wasted update of a setting already captured with better production design this year.

END_OF_DOCUMENT_TOKEN_TO_BE_REPLACED
Taylor Sinople Picks: The 16 Best Films of 2016
Form and Function in Alex Ross Perry’s “Queen of Earth&...
Digging for Fire and Unexpected: Husband and Wife Process Parenthoo...
Every Thing Will Be Fine 3D Review