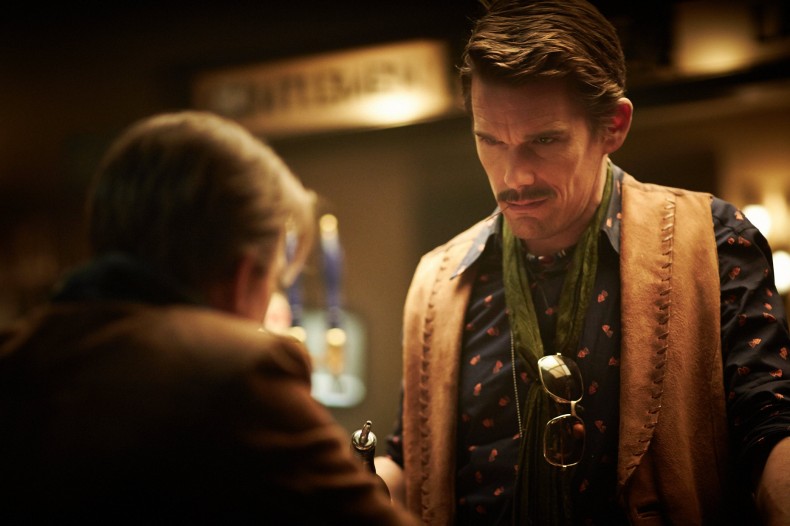 Twisted and proud of it, "Predestination" is a time-travel joy ride with performances and style to distract from its lacking screenplay.

“What if I could put him in front of you – the man that ruined your life? Would you kill him?”

If you recoil at the thought of wrapping your head around another time travel spaghetti dish of paradoxes, this isn’t the one that’s finally going to turn you on to the genre, but those that appreciate a good mind bending will find tons of b-movie fun in Predestination.

The opening minutes are brimming with cool. Low-key lighting set-ups in orange and blue create shafts of light and shadow. A dark, electronic score (composed by Peter Spierig) rolls around in bassy arpeggios. A man in a trench coat slips through the night carrying a violin case capable of transporting him through time fifty-some odd years in either direction of point zero (when time travel is invented in 1981).

Cool can be pretty dumb, though, and for the first third of the film there’s good reason to think that’s all that this indulgent project is. The Spierig Brothers run into major pacing issues right off the bat when they dive into an incredibly lengthy flashback from the writer character’s point of view. The writer, who the Temporal Agent meets in a bar, shares the story of his entire life, shifting Hawke into an uncomfortable reactionary position as the listener of this story immediately after he’s introduced as our main character.

Fifty minutes later, we emerge from the flashback and the plot starts moving forward in time. Then things get interesting. Brevity aside, the writer’s story was, of course, crucial to the events to follow. As we begin to shift around time, Predestination comes alive with that special, warm time-travely sense of satisfaction that comes from seeing things from alternate perspectives and uncovering a larger understanding of the past.

As the Agent gets closer to the truth, and closer to stopping a New York City bombing that will kill 11,000 people, he becomes engaged in a time loop that’ll fully warp your understanding of the “chicken or the egg” quandary. While chock-full of messy paradoxes, the sci-fi stuff of Predestination is taken for entertainment above the pursuit of sound logic. You’re not compelled to figure it all out, as with Primer, so much as to sit back and enjoy the narrative twists as they unfurl, as with Timecrimes.

Hawke (Boyhood, Getaway) brings his unmistakable every-man charisma to the high-concept role, fitting in both as a rule-breaking agent for a top secret government organization, and a 1970’s barkeep (seriously, if alternate universes exist, the one I’m sure of is that Hawke is out there tending bar and chatting up everyone that comes in). While Hawke is the film’s anchor, Sarah Snook is its revelation. Playing a character that makes startling changes in appearance throughout his life, Snook is dynamic and light-footed – a real discovery in a film that could have left the bulk of the weight on Hawke’s experienced shoulders.

The Spierig Brothers may have been having a little more fun with the culture references in Daybreakers (like the Starbucks that serves blood to a world populated by vampires), but while Predestination is missing some of that genre farce, it’s in exchange for a more seriously considered, dramatic story – a winning pay-off in the end.

The third act turns are thrilling, but nearly ruined by a moment of foreshadowing dropped in with the subtlety of a grand piano from a high-rise window. But while that moment tips the film’s hat far too early, the final, crashing reveals should go unpredicted. In fact, the audience will probably need some help after the credits roll.

Taylor is a Chicago-based writer and aspiring film historian. He is the editor here at TFP, and has contributed to a number of international publications such as Cinema Scandinavia, PopMatters, and Room 101 Magazine. He can also be found listening to podcasts, researching topics he has little use for, or running after a city bus.
You might also like
Noah TaylorPredestination

by Taylor Sinople on June 1, 2014
Doug Liman directs Tom Cruise in “Edge of Tomorrow” – a first-rate action sci-fi blowout that’s as fun-spirited as a summer blockbuster should be and smarter than most to boot.
comments
Leave a reply
Add Comment Register

END_OF_DOCUMENT_TOKEN_TO_BE_REPLACED
Taylor Sinople Picks: The 16 Best Films of 2016
Form and Function in Alex Ross Perry’s “Queen of Earth&...
Digging for Fire and Unexpected: Husband and Wife Process Parenthoo...
Every Thing Will Be Fine 3D Review