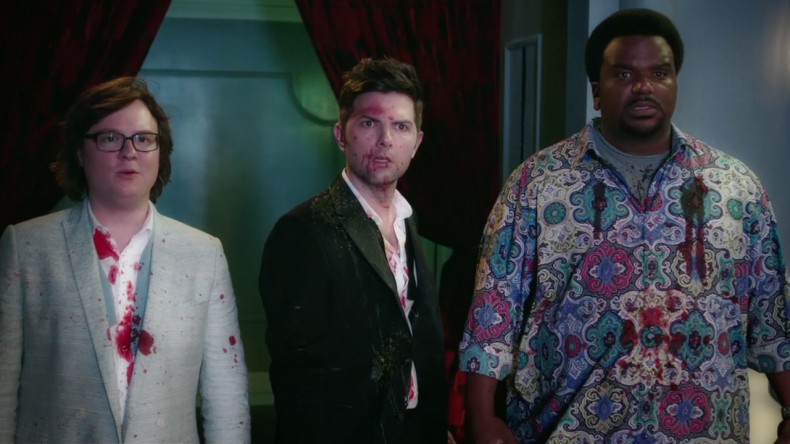 There are some laughs to be had, but Hot Tub Time Machine 2 is a wholly underwhelming experience, one that fails to live up to its predecessor on every conceivable level.

Hot Tub Time Machine was something of a dark horse when it was released in 2010. Starring a group of fairly well-known comedians known for supporting roles and bit parts – alongside John Cusack – the film was met with positive reviews but an unimpressive impression at the box office. Many speculated that time travel’s answer to The Hangover would never produce any sequels or spin-offs as a result of its poor performance. Now, five years later, after seeing Hot Tub Time Machine 2, I wish that were the case.

Set in the alternate future created by Lou (Rob Corddry) and his friends, Hot Tub Time Machine 2 opens with everyone’s favorite douchebag redefining the word unbearable. Lou is an egotistical, destructive mess. As CEO of the Lougle corporation, he is effectively running the company into the ground, dropping in every once in a blue to toss out a great idea before escaping to drown in a sea of cocaine and leaving his board to do all the work. However, one of Lou’s infamous house parties ends in tragedy when an unknown assailant shoots Lou in the penis with a shotgun.

With the help of their trusty hot tub time machine, which Lou stole from the resort and installed in his home, Nick (Craig Robinson) and Jacob (Clark Duke) must go back in time – or so they think – to find Lou’s future killer. But, as the hot tub Repairman (Chevy Chase) reminds them, the time machine doesn’t take you where you want to go, it takes you where you need to go. So, with the help of Adam’s (John Cusack) dorky son (Adam Scott), the gang is catapulted into the year 2025, where Jacob is the man of the house, Nick is a washed up performer, and Lou looks like a drug addicted homeless man.

A premise like this, which continues to follow the Back to the Future formula, should be immediately followed with “let the hilarity ensue.” Yes, the absence of John Cusack was a huge bummer, but the primary source of laughs was the other three members of the gang, so we should be good either way, right? Wrong. It turns out that, without Cusack as a straight man – Adam Scott is a very funny and talented guy, but his character is ultimately too zany and out-of-control to provide much of a structure for the whole crew – the other three characters are prone to flail from one comedic set-piece to the other.

What made Hot Tub Time Machine so hilarious was the sense of immediacy that was offset by the idea that these guys all have to relive their lives the way they did the first time. It was an approach that gave the film direction, and a genuinely hilarious set of jokes that were as nostalgic as they were original. The sequel, on the other hand, suffers greatly from humor that revolves entirely around speculation.

Some bits, like showing Jessica Williams as the future Daily Show host, are hilarious, but there’s not much humor to be found in a movie about the very near future, especially one that’s been so perverted by Lou’s “inventions.” It’s far too removed from reality to have any relevance, and the complete lack of direction makes it even harder to stomach. As a result, the writers rely heavily on improvisation and crude, sexual humor that makes it impossible for any of the characters to establish or maintain pathos for more than a couple of moments at a time.

Interestingly enough, the reason this comedy sequel doesn’t work as well as its predecessor is because Hot Tub Time Machine 2 isn’t as sad. The original Hot Tub was framed around the idea that Lou had attempted suicide, and his estranged buddies were responsible for showing him a good time and understanding why he would try to kill himself. The sequel touches on these ideas briefly, but suicide and addiction are used as plot points, sometimes offensively so. The actors do wonders considering the caliber of the material they’re working with, but many of the film’s failed attempts at drama show a serious need for script revisions.

On that same token, Hot Tub Time Machine 2 is an ugly looking movie, featuring some of the worst cinematography I’ve seen in a wide release since I don’t know when. Made for $14 million dollars, a fraction of the original film’s budget, the film crumbles under its own ambition and ends up looking cheap, rushed, and unfinished. By extension, the rest of the film feels this way, and suffers greatly from a seemingly careless approach to the material, one that seems to exist only as a vehicle for cracking as many crude, stupid jokes as possible in a 90 minute running time. I won’t be the first to say this, and I won’t be the last, but the crew of Hot Tub 2 should have used their control of alternate dimensions to prevent this movie from happening or, at the very least, to make it better.

Josef Rodriguez is a writer, filmmaker, and musician living in New York City. He is often labeled as "that guy who didn't love Boyhood" and he finds himself liking Harmony Korine films more than he likes his own friends. When he's not stressing over turning in reviews on time, Josef can be seen playing guitar, watching "Spring Breakers," or trying to write the next great American movie.
You might also like
Gillian JacobsRob Corddry

by Adam Smith on December 8, 2014
Growing pains and a friendship under stress don’t provide enough substance for “Life Partners,” a buddy comedy that gets tied up in too much meandering and subplotting.
Comments
Leave a reply
Add Comment Register

END_OF_DOCUMENT_TOKEN_TO_BE_REPLACED
Taylor Sinople Picks: The 16 Best Films of 2016
Form and Function in Alex Ross Perry’s “Queen of Earth&...
Digging for Fire and Unexpected: Husband and Wife Process Parenthoo...
Every Thing Will Be Fine 3D Review