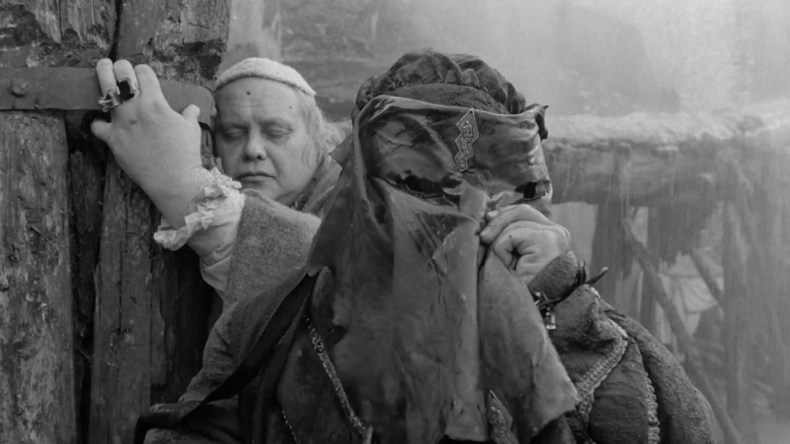 It's hard to watch "Hard to Be a God" in its entirety, but it deserves your attention if you've got the patience and stomach to handle it.

An “experience” film unlike any other, Hard to Be a God is meticulously made to appear loose, like a tightly wound machine playing improvised jazz guitar. Objects often fly in front of the camera. Characters frequently stare right out at us, or even start addressing us directly. The film language used here is not completely foreign, yet rarely is it embraced so whole-heartedly. Whereas most cameras move or cut into close-ups or inserts to highlight specific information, in Hard to Be a God, it is information which instead comes to the camera in droves, with relatively little movement required on the part of the camera. Occasional “break” shots of landscapes offer viewers a reprieve – however brief – of the incessant barrage of peoples, slimes, sounds, and hanging objects that fill the frame for the majority of the film.

Set on planet Arkanar, Hard to Be a God tells the story of a group of scientists from Earth who have come to help a populace stuck in a perpetual version of the Dark Ages thanks to never having had a Renaissance. All this is mentioned by the narrator in the film’s opening 5 minutes, and we are introduced to the anti-hero protagonist: Don Rumata. The film is based on a 1964 novel of the same title by Arkady and Boris Strugatsky, who also authored Roadside Picnic, the source material for Andrei Tarkovsky’s 1979 film Stalker. There is little to no doubt that the source material would be much easier to make sense out of, but why then should the film need to spell things out if the book already exists? Director Aleksei German understood his medium and adapted it as he saw fit, and uncompromisingly so. After all, this was his final film. German passed away in 2013, prior to the film’s release. To fault the film by trying to compare it to existing and highly-praised canonical film works would be a moot point: Hard to Be a God is on another planet.

It is not a narrative film in the traditional sense – the narrative is there, it’s just difficult to follow. The audio track is at any given moment bursting with clinks, clanks, and the shouts of multiple characters. For anyone who doesn’t speak Russian, it’s all too easy to lose track of who’s who and who’s saying what. Watching the film, there’s a sense that understanding the narrative really isn’t the point – or at least not the main one. Instead, it seems to be more about the experience of this alien world, riding along to see what life is like on this planet, taking in things which are seemingly impossible to process. The viewer is put into Don Rumata’s big, metallic, ugly shoes: experiencing an altogether different world, unsure of what you’re supposed to do, until finally you’ve been there so long you forget why you came in the first place.

In a world without art, the inhabitants of Arkanar struggle to express themselves. As such, all things are deeply embedded in a culture very closely involved with its own anatomy. Characters frequently taunt one another by spanking their own bottoms, or prepare for war by wiping mud or feces all over their face. It is not a film for the weak at heart. Later scenes escalate the violence to unexpected heights. The level of gore and explicitness is not unprecedented, but it is startling in its frankness. Early scenes still provide plenty of disgusting moments, yet there is always so much going on that they have little impact. However, near the film’s end, specific events are shown vividly, individually, and free of distractions. There is an over-abundance of phallic imagery throughout – from weaponry to a giant wooden phallus for killing enemies, to a ten-second shot of an actual donkey’s member. Don Rumata even wears a piece of jewelry on his forehead shaped in such a way. He’s a dickhead.

This is a film which puts the long-take to new use. Long takes typically fall into one of two categories: those which draw attention to what is happening in the frame and away from the duration of the shot, and those which draw attention to the duration of the take. In Hard to Be a God, there is a most curious blend of both; editing the film seems to have primarily consisted of placing a string of long takes together, yet each shot is so consistently overflowing with characters, objects, and actions that it becomes surprisingly easy to lose track of where each shot begins and ends. The entirety of the film uses duration in an interesting way – especially given its epic run-time. In fact, it might best be screened or viewed with a pair of intermissions to allow for the processing of what has been witnessed in increments. The aforementioned “break” shots of landscapes could be considered and used as chapter headings in such a scenario.

As has been noted by most, the film’s production design, art direction, and costuming is astonishing. A wonderful attention to detail keeps the world of the film hermetically sealed, and singular in its vision. The cast pull their own weight excellently, with Leonid Yarmolnik giving a standout performance as Don Rumata. Every technical element of the film works together seamlessly in tandem. Constantly ensuring busy frames of film are the worldly elements which mingle with the mise-en-scène – gases liquids and solids in the form of fogs, rain, and terrain. The film also presents their humanly counterpoints – the condensation of exhales, blood, and feces. But even these do not begin to cover the variety of textures and images on planet Arkanar.

A nightmare of a masterpiece certain to grow in its reputation over time, Hard to Be a God is hard to watch and even harder to classify, but it’s well worth your time if you’ve got the patience and stomach for it.

Maximilien Luc Proctor graduated with a Bachelor’s degree in Film and Media Studies at the University of Oklahoma. In his spare time he plays guitar and sings in a band, as well as watching and making films however and whenever possible – as a one-man-production-team making avant-garde shorts or as a director of a small-scale independent feature productions. He likes what he sees in cinema and wants to celebrate the good stuff whenever possible.
You might also like
Hard to be a God

by Maximilien Luc Proctor on February 11, 2015
Because I got off to a slightly late start this morning, I had to start running by the time I had hit Potsdamer Platz in order to make it to the Palast 9 o’clock screening of Russian director (as if you couldn’t guess from his name) Alexej German, Jr.’s Under Electric Clouds. What a trip. An […]
comments
Leave a reply
Add Comment Register

END_OF_DOCUMENT_TOKEN_TO_BE_REPLACED
Taylor Sinople Picks: The 16 Best Films of 2016
Form and Function in Alex Ross Perry’s “Queen of Earth&...
Digging for Fire and Unexpected: Husband and Wife Process Parenthoo...
Every Thing Will Be Fine 3D Review