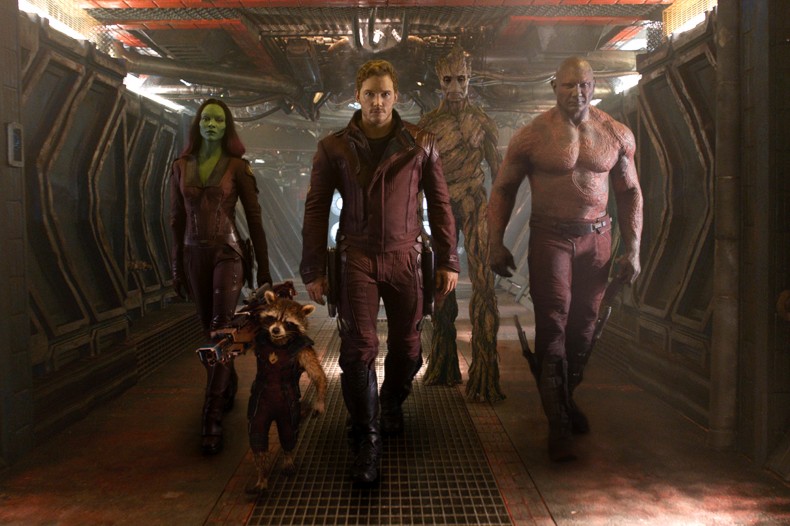 Director James Gunn’s penchant for hyperbole is form fit to the little-known "Guardians of the Galaxy," sneaking in ludicrousness and self-awareness behind layers of masterful production design.

Despite first appearing in comics 45 years ago, very few have had even a scant awareness of the Guardians of the Galaxy. Moreover, the most recent Marvel Studios production focuses on the 2nd incarnation of this superhero assemblage, a team created a mere six years ago, not really allowing enough time for the text to permeate the cultural milieu. But, as it turns out, anonymity can be a massive advantage in the right hands.

In another attempt to hand off a budding franchise to a director known primarily for smaller budgeted niche cinema, a practice that has now led to two of the three best productions the studio has offered, Marvel made the strange choice to hire James Gunn. With only two full features under his belt, Gunn has already established himself as possessing a more cult sensibility. And it is a testament to his own ingenuity that he has now become the auteur behind a $170 million blockbuster despite getting his start with Troma Entertainment. And thankful for it am I, because “Guardians of the Galaxy” is easily the finest superhero film since “The Avengers” and perhaps even before that. And what makes it so utterly fun is the characteristic that so many of these movies seem to lack: knowledge of exactly what it is.

A massive spaceship abducts a young boy who is grieving over the loss of his mother that took place seconds before. This is the only backstory we are given to Peter Quill (Chris Pratt), puckish protagonist and all-around cool guy, who cares more about the recognition of his moniker (Star Lord) than his own well-being. From here he are catapulted 26 years, from 1988 to the present, to watch Quill dance his way to a conveniently placed relic he is hoping to sell. He is a scavenger, a ne’er-do-well, and a jokester. He is wonderfully incredulous to the various absurdities of space and possesses a comedic sensibility beyond the usual quips and japes that superhero films possess. And all of these traits are established in mere minutes. In recognizing the audience has little understanding of the inhabitants of “Guardians of the Galaxy” the story is allowed to shirk its responsibility of showing the same rote origin story we feel we need to view. The movie launches into action and rarely ceases.

He is eventually joined by Rocket (Bradley Cooper), an anthropomorphic raccoon bounty hunter whose sentience is the product of genetic experimentation gone awry, Groot (Vin Diesel), massive tree-person simpleton and companion to Rocket, and Gamora (Zoe Saladna), would-be assassin sent from the evil Ronan to retrieve the aforementioned relic. And, after a brief stint in space-jail, Drax the Destroyer (Dave Bautista) joins the posse, seeking revenge on Ronan for the murder of his family. And while Dave Bautista is largely known as a member of the WWE, his performance here is nearly faultless. This team is a cadre of misfits in the best possible way, with each character possessing a layered persona despite one of them knowing only three words. And if you had told me prior to entering the theater that I would register emotionally the most with a CGI talking raccoon voiced by Bradley Cooper I likely would have thought you a fool. But Rocket is likely the most finely crafted character in the entirety of the film. He is not only shockingly self-aware, but at times an excellent stand-in for the audience. As the characters rise individually to voice their unity, he is quick to point out just how silly that act would look in reality. He doesn’t know why he was made, and from this stems a real existential crisis that occurs midway through the film. His insecurities are not cartoonish despite his appearance and as these are revealed, the motivation for his relationship with Groot becomes more and more clear in an incredibly human way.

And while the appearances of the various planets seem to largely be re-appropriated from other films, the scenes that truly take place in space are mesmerizing. One scene in particular is able to utilize the imagery of the Pietà against the backdrop of a cluster of stars that seems neither heavy-handed nor uncharacteristic. Great science fiction films seem to possess a very dynamic quality to them. Something appearing wildly cool and alien can occasionally be seen just in the background, with no real context, discussion, or use. The same could be said for the production design of “Guardians.” There is so much awe to be had from the mystery of a beautifully designed and wholly original piece of future-tech that to take the time to explain it would only demystify it entirely. This occurs in several moments throughout the movie and it is wonderful to see when so much care goes into the peripheral.

Without a doubt, this is the finest blockbuster that has been released this year. And while we are subject to occasional histrionics, the movie is ultimately better than it should be. The team is spectacularly cast and there is a laugh on nearly every page of the script. It eschews the formula that Marvel has been following and feels completely free because of it. And with Gunn at the helm, I look forward to the continuation of a franchise that at least knows it’s a franchise.

END_OF_DOCUMENT_TOKEN_TO_BE_REPLACED
Taylor Sinople Picks: The 16 Best Films of 2016
Form and Function in Alex Ross Perry’s “Queen of Earth&...
Digging for Fire and Unexpected: Husband and Wife Process Parenthoo...
Every Thing Will Be Fine 3D Review