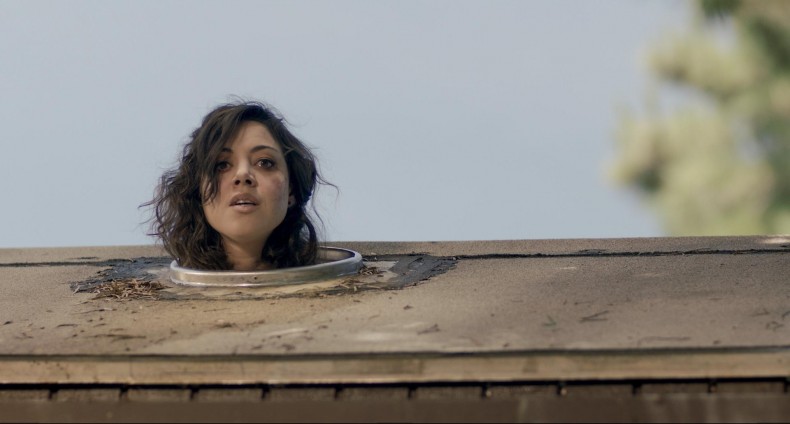 “Life After Beth” is a funny, if uneven, zom-rom-com that only explores a fraction of its limitless potential, wasting a horribly misused cast in the process.

Who knew that, ten years after “Shaun of the Dead,” the zomantic comedy would still be in such disarray? Jeff Baena, who co-wrote David O. Russell’s brilliant “I Heart Huckabees,” makes his directing debut with “Life After Beth,” starring Dane DeHaan as Zach, a 21-year old college student who has just experienced the death of his first love, Beth, played by Aubrey Plaza, scene stealer extraordinaire.

With support from Beth’s parents, Maury (John C. Reilly) and Geenie (Molly Shannon), Zach endures his first week away from Beth as he figures out what to do with his life now that she’s gone. Forging a friendship with Maury, the two discuss what they should have said to her over a joint and a game of chess. Although Zach’s last moments with her were not the most comforting parting words, Maury insists that neither of them should let their last words with Beth define the relationship they both had with her, Maury being her father and Zach being her first love.

The two decide to stay in touch when, out of the blue, Maury doesn’t return any of Zach’s phone calls and doesn’t answer the door even though he is clearly home. When Zach thinks he catches a glimpse of Beth while looking through Maury’s window, he bursts through the door to find her standing in front of him, alive and well. Maury tells him that, with no explanation, Beth was resurrected.

Given a second chance to do everything right, Zach devotes his entire life to making Beth happy. Yet, as the days pass, he notices some unorthodox behavior that may be cause for concern. Her obsession with attics and smooth jazz is alarming to Zack, and her deteriorating skin tells him everything he needs to know: Beth is becoming a zombie. Try as he might, Beth’s increasingly violent behavior is too much for him to handle, especially when other corpses in town are reanimating as less coordinated versions of their old selves.

Jeff Baena’s work on “I Heart Huckabees” made quite the impression on many, myself included, contributing to what is arguably David O. Russell’s most personal work, an existentialist nightmare that dares its viewers to disassociate familiar faces and think for themselves in ways that most American films never would. “Life After Beth” has similar, if less lofty, things on its mind, and it works as an appropriate reintroduction to Baena’s unique perspective, but also as an effective metaphor for love in all of its messy stages.

Baena’s vision depicts zombification as a slow, personal process that gradually strips away the personality of the recently deceased, leaving their loved ones with a violent and hungry fragment of what they once were. The same could be said of a bad relationship, and Baena plays Zach’s sudden reuniting with Beth as exactly that, a second chance for a relationship that should have never continued in the first place. Had Zach truly taken Maury’s advice, he would have realized that his breakup with Beth was a necessary one, and that this coincidental resurrection isn’t the work of fate reuniting two souls who were meant to be together. If anything, it serves as further proof that this pair of lovebirds need to be as far away from each other as possible.

But Zach, in his blind recognition of the erroneous former, insists on patching things up with Beth when her skin is literally peeling off her body. Using the zombie apocalypse as a representation of heartbreak, “Life After Beth” is no “Shaun of the Dead,” no matter how much its pun-laden title wants it to be. Any film where someone gets over his zombie girlfriend by shooting her in the head to the tune of smooth jazz is not one that can be easily ignored, but key scenes like this still don’t quite justify “Life After Beth’s” existence.

Dane DeHaan’s much-needed comedy debut continues to display his range as a heartbroken college student who, when given a second chance, realizes that his undead ex-girlfriend really is better off in the grave. However, it’s Aubrey Plaza in the titular role that steals the show, fully dedicating herself to material that is far beneath her.

Anna Kendrick shows up for a couple of scenes, in what amounts to little more than a cameo, as one of Zach’s childhood friends. From the minute her character is introduced, you know that the two are going to end up together, but Kendrick is such a consistently entertaining presence, and one can’t help but wish that every movie she’s in has more of her. From Jason Reitman’s “Up in the Air” to Joe Swanberg’s “Drinking Buddies,” Kendrick has proved herself to be an adaptable actress capable of both blending in and leaving an impression every time she enters the frame. If the film’s greatest sin isn’t under-utilizing Aubrey Plaza, it’s casting Anna Kendrick as a plot device. In fact, the same could be said about most of the film’s cast, who seem prepared to unleash great comedic performances in a film that is essentially the equivalent of a parent at the grocery store, reassuring their impatient kid by continually saying, “Just a little bit longer, I promise!”

“Life After Beth” is pleasant enough, filling its slow-burn first hour with a host of uniquely executed laughs and the nagging feeling that all of Beth’s inexplicable idiosyncrasies will eventually come to a head. Unfortunately, Baena’s script is a feature-length personification of Beth’s parents, constantly distracting the audience with the promise of so much, knowing that it couldn’t possibly deliver. Although one of the film’s most hilarious conclusions comes when the film’s only Haitian character is offended by the stereotype that he’s involved in some kind of voodoo that could explain the outbreak, Baena seems quite satisfied to leave the audience hanging.

Had Baena decided not to reveal the source of the outbreak as a result of deliberate writing, it probably would have worked in his favor. But continually emphasizing the numerous odd behaviors becomes a complete cop-out when a news reporter appears on a TV at the end of the film, deus ex machina-ing the audience out of a proper explanation. I’m all for subverting expectations whenever possible, especially in high-concept horror like this, but Baena strings us along for so long that cutting us loose whenever he feels like it’s time to stop trying is just irresponsible filmmaking.

Josef Rodriguez is a writer, filmmaker, and musician living in New York City. He is often labeled as "that guy who didn't love Boyhood" and he finds himself liking Harmony Korine films more than he likes his own friends. When he's not stressing over turning in reviews on time, Josef can be seen playing guitar, watching "Spring Breakers," or trying to write the next great American movie.
You might also like
Anna KendrickAubrey PlazaDane DeHaanJohn C. Reilly

by Taylor Sinople on February 4, 2014
Joe Swanberg is serious about telling stories. Rough aesthetics, microbudgets, and a preference for loose 20-something page outlines over concrete 100-page scripts characterize Swanberg’s many contributions to the mumblecore movement and status as a filmmaker’s filmmaker. Now sixteen features deep in the ten years since he left film school, Swanberg has felt out nearly every […]
Comments
Leave a reply
Add Comment Register