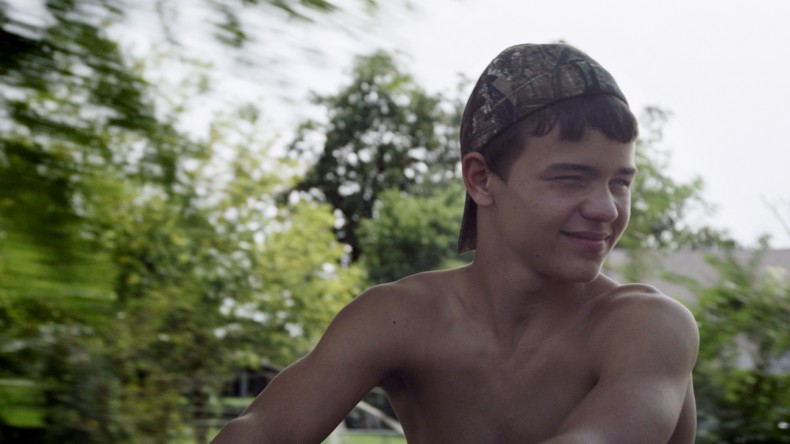 “Rich Hill” is visually stunning and occasionally insightful, but it can be a chore to get through, and it never coheres into anything more than a series of loosely connected plot threads and vignettes.

“Rich Hill,” the directorial debut of Andrew Droz Palermo, Adam Wingard’s DP for “You’re Next,” and Palermo’s cousin, Tracy Droz Tragos, focuses its lens on the town of Rich Hill, Missouri. With a population of nearly 1400, Rich Hill was once a hub for coal mining until World War II sent the town into an economic depression when, with little warning, the coal was mined out. Since then, the folks of Rich Hill, like many other small towns across America, have struggled to maintain some semblance of relevance with unsuccessful attempts to revamp their economy. Starting new businesses, attracting nearby townspeople with their annual 4th of July celebration; anything to keep the money flowing.

But so far, no progress has been made, and Rich Hill is still home to hundreds of poverty-stricken families. Among them are Andrew, Harley, and Appachey. Three young boys in Rich Hill with no connection whatsoever, all suffering from the same basic problem: they just don’t have any money. Andrew, 13, is an eternally optimistic young man, doing whatever he can to keep himself occupied with school and his family. His mother, who has been prescribed sleeping medication that once put her down for nearly three days, is nearly bed-ridden, while his father refuses to hold down a steady job. Nevertheless, Andrew believes that God will make time for him and his family one day, and all he can do is humbly wait until that day comes.

Harley, 15, is a completely different animal. His mother is serving a long-term prison sentence for attempted murder, while Harley is living with his grandmother, saddled with wildly unrealistic expectations of his future. He suffers from severe anger issues, consorts with the Juggalo community, and is prone to abandoning school only halfway through the day. With no guidance in life, it’s doubtful that Harley will make it to graduation.

Appachey, 12, is the youngest of the three, making his way through 6th grade for the second time. He’s an avid skater, and talks of teaching art classes in China. Diagnosed with a laundry list of mental disorders, his mother insists that he’s old enough to make his own decisions and doesn’t force him to take any medication. Already a heavy smoker, Appachey talks of the life he’d like to live and the father who abandoned him at age 6, while trying to find his way in a world that seems to reject him.

“Rich Hill” begins by adhering to the unwritten rule of nearly every modern documentary, which is that the characters must be introduced in a well-shot but otherwise inconspicuous prologue, one that is preferably composed of naturalistic sound design and a slowly swelling score. Here, that score culminates with the simultaneous passing of a freight train, and I’d be lying if I said it didn’t instantly grab my attention, but it left me wondering where the focus would lie. The free-flowing, improvisational nature of a documentary leaves its creators in a position where they can devote more time to the aesthetic of the film and, especially in the digital age, that aesthetic has a tendency to work as a distractor to the viewers, sometimes to cover up a lack of material, other times as a clever transition, as was the case in Joe Manganiello’s “La Bare.”

Giving a definitive answer isn’t easy, as the film is guilty of using its lush imagery as a crutch, but Palermo, with his cinematographic background, has the sense to use those images to enhance the story whenever he can, especially in relation to developing his trio of subjects, which is surprisingly often. The three protagonists of “Rich Hill” are all radically different boys, and the film doesn’t shy away from portraying them as they truly are. Andrew is undoubtedly the most sympathetic character while Harley and Appachey are far more volatile personalities, prone to random outbursts of anger and thought; one scene between Harley and a school guidance counselor is nail-bitingly tense as the camera shows Harley’s hands shaking uncontrollably with anger. At 91 minutes, “Rich Hill” undergoes the impossible task of doing these three boys justice in a time frame that averages out to less than 30 minutes a piece.

The personalities are three-dimensional and endlessly fascinating, but the film’s maddeningly brief runtime does it a massive disservice. Whenever a major event takes place in a character’s life, like the fact that Andrew moves nearly three times throughout the course of the film, the passage of time is explained in a brief voiceover that can become frustrating when what’s seen on the screen is visually stunning but only intermittently incisive. Given more time, “Rich Hill” would have had a better chance to develop its subjects and themes, but also to make its ultimate send-off, which is that not everything is going to get better for these boys because we want it to, more impactful.

Sure, it’s a little strange that the guiding perspective in the film is that of the white male, especially considering how one of the film’s directors is a female Rich Hill native, but “Rich Hill” is able to justify its focus by illustrating how these three boys are, in essence, citizens of every town in America. Editor Jim Hession does all he can to form a coherent story with this in mind, but “Rich Hill’s” sprawling and constantly developing narrative is one that’s more suited to a mini-series or multi-episode HBO special, not an intimately drawn documentary.

END_OF_DOCUMENT_TOKEN_TO_BE_REPLACED
Taylor Sinople Picks: The 16 Best Films of 2016
Form and Function in Alex Ross Perry’s “Queen of Earth&...
Digging for Fire and Unexpected: Husband and Wife Process Parenthoo...
Every Thing Will Be Fine 3D Review