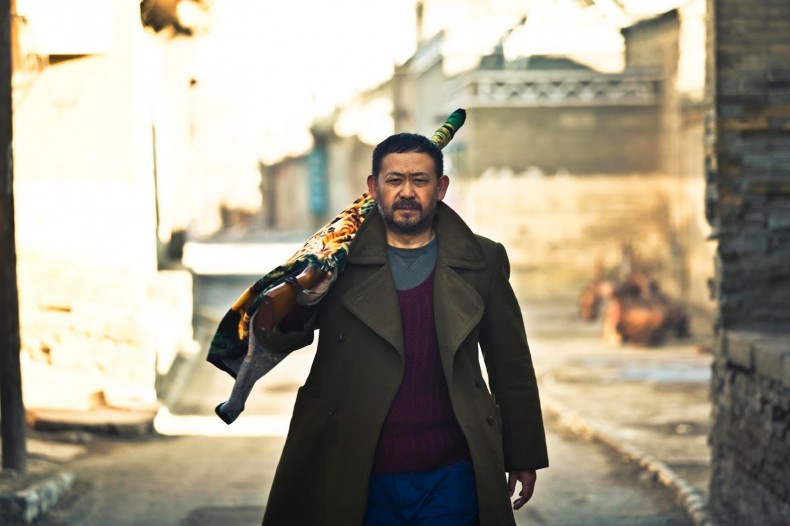 It’s not without a strong reason that Zhangke has been labeled as a leader of Chinese Sixth Generation film-makers. He has proven his versatility on his different approaches to tackle the essential themes he goes for. Ranging from short films to documentaries to dramas, the alienation his society is facing in the modern China’s economic boom and the large scale globalization, have always been perceived as a fresh and enthralling experience.

While A Touch of Sin with its extended violence might have been considered a departure from Zhangke’s typical visual style, in its essence it’s just another manifestation of his versatility, a gamble that’s been paid off to cement his status as the most important Chinese director working right now.

There are four loose interconnected stories (all these stories have some real-life truth to it) in the film sequentially shown to complete an anthology. Dahai (Jiang Wu) is a middle-aged miner who increasingly grows impatient with the inequality created by his mine owners who unsurprisingly also run the village. It’s the lack of urgency to do something from its co-villagers and rather their vulnerability to succumb so easily to the demands of the ruling class that drives him to a breaking point, going into a Tarantino-like bloodbath frenzy which is meant to be shown as triumph to the audience.

This violent pattern is strongly followed also in the third story where the continuous women objectification by the ruling class who are alienated to the fact that their overnight wealth isn’t the key to all the locks, comes to an end by a young denigrated woman (played by Zhangke’s wife, Zhao Tao).

It’s in the second story we are witnessing a breaking of the pattern with Xiao Hui (Wang Baoqiang), who is shown as a ruthless killer in the beginning of the film, visiting his family for his mother’s birthday. He seems indifferent with the lifestyle of the family and isn’t particularly thrilled to be with his wife and his kid. He has other things in his mind (the story is based on Zhou Kehoua, a notorious murderer who has been in the run for 8 years) and this is when Zhangke moves away from his sympathetic perpetrators lens to give a cold and uncompromising view of Chinese rising crime stats.

The richness of this film comes from the fact that every new story inherits the struggles shown before while simultaneously adding a layer to its own. Such is the case with the fourth segment which lacks the flashy style, but it’s merely a collection of the previous themes rehashed in a different environment where a young factory worker (Luo Lanshan) can’t come to terms with the humiliating services his newly found love interest has to offer in order to survive.

The only slight complaint we might have with this film is the lack of balance on the viewpoint of these situations (this is one of the reason this film has yet to be cleared from censors in China) but this is not something we should be surprised from Zhangke. He is an active follower of the more nuanced realist tone and even if he’s a bit furious in his statements, he has come a long way to blow away the borders of what film could previously transmit in China. A Touch of Sin would have been unthinkable years ago and it’s still has its obstacles lacking a proper release in its own land but this is without a doubt another Zhangke landmark in Chinese contemporary culture.

Adil is a Telecommunications Engineer with a passion in Data Science, Soccer and Film. Once he found Terrence Malick, his film experience was never the same.
Comments
Leave a reply
Add Comment Register