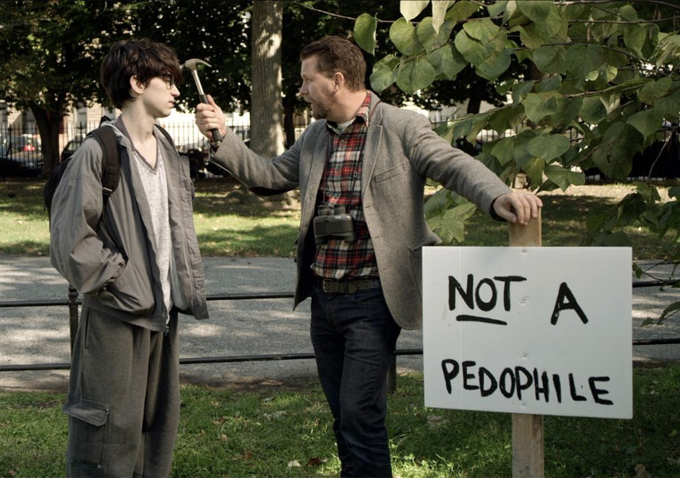 Much like many of the jokes and the protagonist's views on manhood, How to Be a Man misses the mark over and over again.

What makes a man a man? According to director Chadd Harbold’s second feature film, “How to Be a Man,” manhood looks a lot like a mid-life crisis. The film stars Gavin McInnis (co-founder of Vice and often referred to as The Godfather of Hipsterdom) as Mark, an aging, out-of-practice comedian with a pregnant wife who learns he’s dying of breast cancer and sets off to create a documentary with the help of Bryan (Liam Aiken) to teach his son how to be a man.

The relationship between 22-year-old Bryan (who admits he’s never met his father) and Mark offers some memorable dialogue on topics ranging from cunalingus to astrology, with Bryan acting as a surrogate son and an audience for Mark’s unconventional ideas on parenting. The film seems unsure if Mark is a prophet or a maniac and often uncomfortably toes that line. At one point, Mark receives a standing ovations from cool-looking 20-somethings at a bar after physically demonstrating the “right way” to go down on a girl. It’s as if Mark is supposed to have redeeming qualities or charisma, but it’s lost in a sea of crude jokes and despicable acts.

The film pokes fun at the fact that the premise is reminiscent of Bruce Joel Rubin’s “My Life” starring Michael Keaton. Mark’s mission may not be unique, but his approach certainly is. In recording videos of himself on drugs as a means of warning his son of the perils of addiction, he becomes involved with the things he denounces. Mark seems more interested in perpetuating male stereotypes than trying to be a stable adult, using ideas of manliness to distract him from facing the responsibilities which come with being a father. Unfortunately, any kind of theme or purpose that the film hints as is overlooked and touched on very rarely due to odd pacing and dialogue that occasionally dips into cliché.

Bryan’s epiphany comes when he realizes that Mark’s advice works on women. He instantly forgives Mark’s behavior (which has put his own life in danger on more than one occasion) in a scene that manages to be too blue in its humor to be poignant. The real problem with the film is it’s emphasis on a style of comedy that doesn’t match its subject matter. Sure, there are laugh-out-loud moments, but they’re few and far between with not much else to fill the space. The film is obviously trying to say something about contemporary manhood and fatherhood, but any substance is lost in the never-ending monologues delivered by McInnis that feel more like stand-up bits thrown in to fill time than a vital part of the narrative. Instead, the film becomes a derivative story of a midlife crisis with an ending that feels like a punch-line.

END_OF_DOCUMENT_TOKEN_TO_BE_REPLACED
Taylor Sinople Picks: The 16 Best Films of 2016
Form and Function in Alex Ross Perry’s “Queen of Earth&...
Digging for Fire and Unexpected: Husband and Wife Process Parenthoo...
Every Thing Will Be Fine 3D Review