Reviews
3
3
previous article
Sundance USA: Happy Christmas
next article
Scarlett Johansson Bewitches Us in the Official (and Very Creepy) "Under the Skin" Trailer! 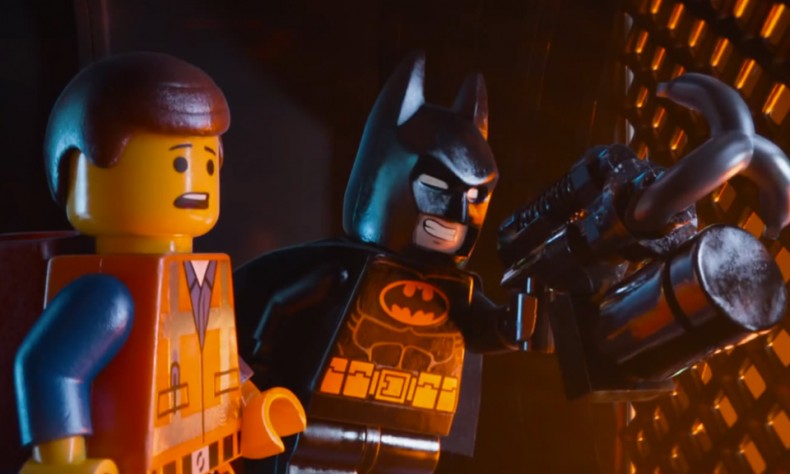 A few gratuitous moments of animated action chaos aside, “The Lego Movie" is a thrilling and nostalgic trip into childhood imagination with an irresistible art style.

An unexceptional construction worker mini-figure (or “Lego guy”) named Emmet (Chris Pratt) lives day-to-day, decision-to-decision following the instructions that inform everyone in the Lego universe on how to live and behave. He buys his $37 coffee, he goes to work, he builds skyscrapers only to tear them down again, and he’s REALLY happy about it. That is, until he stumbles upon an ancient and fateful relic long prophesized to be discovered by the “Special” – an epic builder of heroic proportions capable of saving the universe from impending destruction. Now, having found this long sought after block called the Piece of Resistance (see what they did there?), Emmet crosses paths with Vitruvius (Morgan Freeman) – an elder wizard leading a secret society of Master Builders – to save the world from an evil tyrant named President Business (Will Ferrell).

Emmet: clumsy, boyish, and frequently outright dumb – can he really be the “Special”? This little plastic guy comes to terms with some very large and human fears about being doomed to normalcy: a nothing. In the Lego universe, what the Master Builders really need is someone that can think outside the box. Hell, why not Emmet?

“The Lego Movie” is a thoughtful and well-designed animated picture with strong moral value to kids (and reminder for adults) that would appeal to everybody in the family by way of Pixar if it was just tightened up a bit. Phil Lord and Chris Miller, the team behind PG-Rated animated adventure “Cloudy with a Chance of Meatballs” and R-Rated comedy “21 Jump Street” pool their experiences entertaining both age groups to tell this Lego story. But there’s a strange dichotomy at work with the humor and action sequences designed for children and the references and thematic material meant for adults. Lord and Miller pass the ball back and forth rather than creating a holistic experience for both the kids and the parents, meaning, at a given time, 50% of the audience may be nodding off while the other is eating it up. References and metahumor will fly way over kids’ heads, while the persistant cacophonous action sequences will give the adults a headache.

What everyone can agree on, at least, is that the incredible art style is one of the most exciting visual approaches to a Hollywood animated film in years. I had no idea I would see the trailer for “The Lego Movie” and think, “now that’s something I have to see.” Yet the eye-catching animation process that looks lo-fi enough to be animated by simple stop-motion, yet polished enough to fit in with the other CG giants, simply demands viewing from anyone who has had a lapse into imagination with Legos as a kid or adult. Absolutely everything on screen is made from Legos. A racecar has little rubber wheels and plastic, orange flames coming from the exhaust. When it flies around a turn the smoke from the tires is all little grey and white Lego blocks. The characters move with the constraints of their physical design, and their faces are actually painted on. A police officer, played by Liam Neeson, has a face on either side of his head, allowing him to spin it around to play good-cop-bad-cop with himself.

Emmet, in his quest to use the Piece of Resistance to save Legomanity, teams up with a female Master Builder named WyldStyle (Elizabeth Banks), who happens to be dating a real jerk – Batman (Will Arnett). Together, they leave the urban metropolis and discover entirely new realms, each with their own theme – Pirate’s Cove, Medieval Castle, and more. Like “Monsters, Inc.” and “Cars” did for their respective communities of non-human characters, “The Lego Movie” draws on a rich well of satire and referential comedy that comes from entering a world with its own rules. From the get-go, with a prophecy read by Morgan Freeman that concludes with “and this is all true, because it rhymes,” Emmet’s adventure is plainly one that won’t take itself too seriously. Metahumor and genre-mocking sets the film apart from more strait-laced animated comedies, but the comprehension level is set firmly at an adult level for much of the fairly smart satire of American life. Consumerism, capitalism, corporate advertising, Starbucks, bad TV shows, and adventure movie clichés all receive the guillotine. Most crucially of all, we witness an animated reflection of what we could become should blind enthusiasm lead to dangerous ignorance.

When “The Lego Movie” isn’t speaking to these surprisingly mature themes, it frequently devolves into relentless, large-scale action sequences, painfully rendered in completely unnecessary 3D. Chase sequence after chase sequence becomes grating as the writing and design of these in-your-face attacks take a significant hit in quality. Many set pieces hope to emulate popular Hollywood moments – a spy thriller, for example, but neither satirizes nor glorifies the genre. Without any spark of originality it all becomes noise.

The filler stuff is thankfully eschewed in time for the brilliant third act that alters the entire course and scope of the film in the most obvious yet unexpected way. It’s enough to bring home the emotional crux of the film in a big way, but doesn’t entirely save the film from being an overall spotty experience. The material is ripe with unplowed turf to draw from, giving this animated toy adventure every chance to rise above being the most expensive Lego commercial ever made. I could so easily imagine an R-Rated version of this story. The comedic rhythm and supporting cast that includes Nick Offerman, Charlie Day, Jonah Hill, and Alison Brie is so close to going all the way with the adult approach that it feels hindered, not enriched, by the fact that Lord and Miller have younger audiences in mind as the primary target. Without finding a way to make at least one age group enjoy 100% of this film, “The Lego Movie” may not be history-making animation, but it’s relentless, silly fun and does the Lego universe proud as a cinematic adaptation of the infinite possibilities of constructing your own world out of little blocks.

Taylor is a Chicago-based writer and aspiring film historian. He is the editor here at TFP, and has contributed to a number of international publications such as Cinema Scandinavia, PopMatters, and Room 101 Magazine. He can also be found listening to podcasts, researching topics he has little use for, or running after a city bus.
You might also like
Channing TatumCharlie DayChris MillerChris Pratt

END_OF_DOCUMENT_TOKEN_TO_BE_REPLACED
Taylor Sinople Picks: The 16 Best Films of 2016
Form and Function in Alex Ross Perry’s “Queen of Earth&...
Digging for Fire and Unexpected: Husband and Wife Process Parenthoo...
Every Thing Will Be Fine 3D Review