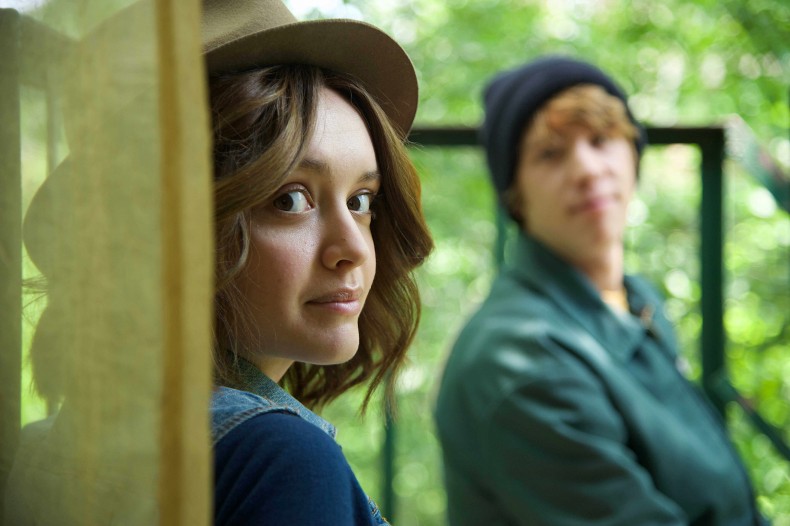 Inauthentic and painfully self-aware, "Me and Earl and the Dying Girl" replicates the indie visual flairs of coming-of-age classics without a chance of becoming one itself.

Me and Earl and the Dying Girl is on the tip of many indie-aware moviegoers tongues as one of the most anticipated films of the summer.

Greg, his best friend Earl, and Rachel – the dying girl diagnosed with leukemia –united Sundance audiences en masse, resulting in a surprise win of both top prizes in the Audience and Jury categories (a rare vote of synchronicity that Whiplash managed to achieve just last year).

What exactly were Sundance audiences falling for – hook, line, and sinker? Me and Earl looks, sounds, and moves like an amalgamation of every quirky, coming-of-age indie-classic to emerge from Sundance in the past decade. But where Zach Braff’s Garden State showcased a light, original sense of cinematic freedom, Me and Earl is heavy and restrained in its laborious efforts to replicate successes of Sundance’s past. 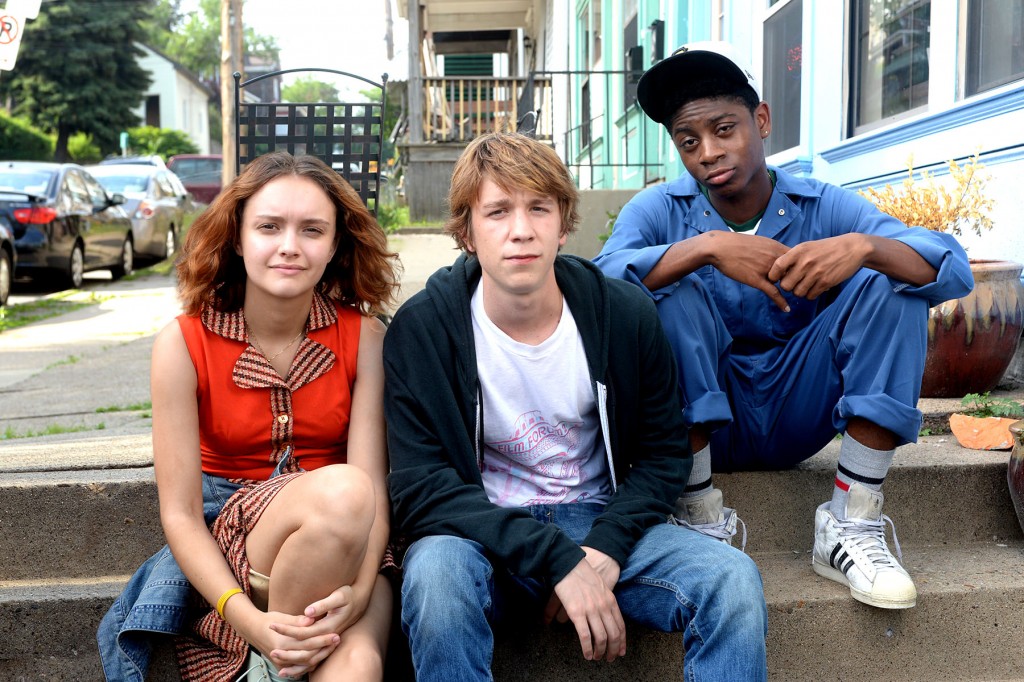 This vision of high school conjured up from the 80’s bin of cult classics is riddled with anachronisms that lend the film’s world a sense of self-aware, intentional construction that just does not play well with the serious tone assumed by the film’s later passages.

It’s not a throwback, it’s just painfully outdated. “A high school culture dominated by cliques and the one student that doesn’t fit in with any of it” isn’t a set-up we need to be re-hashing further. And when it comes to positioning Greg, our lead, in this faux-modern world, actor Thomas Mann never gets a chance to give us anything to grab on to, and quickly becomes difficult to muster enthusiasm for.

Greg is apathetic without recklessness; a romantic without any interest in romance. It’s the type of blank-slate characterization that worked so well for Richard Linklater in Waking Life – but here rather than being impacted, entertained, or frightened by his experiences, Greg is practically a flat-liner – hitting similar notes throughout and never truly pulling off the endearingly awkward dumb-charm we’re repeatedly told to believe he possesses.

Part of Me and Earl’s success has to be coming from the fact that director Alfonso Gomez-Rejon throws a lot of respect to the popular auteurs that changed cinema – Kurosawa, Scorsese, Godard, Kubrick.

Greg and Earl share a secret bond in their shared passion for world cinema, and their friendship is built on watching and recreating classic films – swapping the titles and plotlines with hilariously absurd or perverted alternatives (A Sockwork Orange, Raging Bullshit, Pooping Tom). The quick glances we get at their parody re-makes – an opportunity for absurd, improvisational comedy – are unexpectedly unfunny, and earn no real justification for being the center of most of the action in the film.

Me and Earl only goes more wrong when it comes to the visual style – a procession of swiveling, flipping, falling-over camera moves and random jaunts into stop motion animation that feel more like one-upmanship than anything being legitimately called for by the story.

Gomez-Rejon reveals a real misinterpretation of the impact of these visual eccentricities, and we quickly find that simply carrying out frolicking tricks of whimsy is not enough if that whimsy isn’t backed up with any real narrative density or purpose. In other words, Wes Anderson films don’t just work because of the centered shots, pastel colors, and quirky narration.

As a result, the first half Me and Earl is light and unpredictable, but also includes a definite hollowness with too little attention given to too many ideas. The second half then abandons most of that work and bulks up the dramatic firepower, hitting heavy with several high-emotion sequences, but now paying little attention to any distinctive visual style at all.

Take the frequent chapter title cards on-screen that mostly begin with “The part where…” – a would-be fun twist on plot structuring, had these title cards actually said anything interesting beyond the entirely self-explanatory advancements of plot: “The part where I start my senior year of high school.” 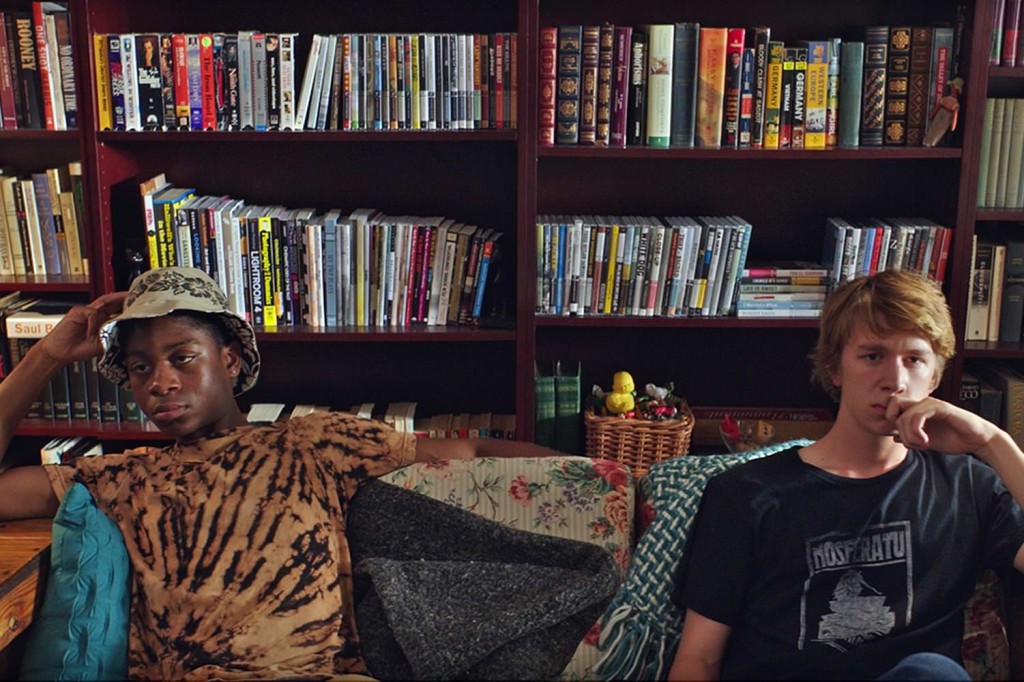 It’s not that the film has nothing to say – the final scenes are successfully moving, and the attention paid in these moments to the small details that make up a person’s life are particularly touching – but everything the film does manage to say is said through filters upon filters of overly-precise comedy and plotlines without any payoff (Nick Offerman’s character is layered with character quirks for no reason whatsoever and is in the film for seemingly no purpose other than to provide a marketing boost for the film) that altogether robs Me and Earl of the chance of breaking through to the types of universal truths that make classic coming-of-age films timeless.

And speaking of timeless films, perhaps most offensive is in the use of references to Greg’s favorite movie – François Truffaut’s The 400 Blows – a film that will continue to speak to the struggles, joys, and inevitable defeats of youth for generations. How strange, then, to hear Gomez-Rejon using that great film’s magical and melancholic piano score over the images of Me and Earl – a film that seeks to replicate the level of truth found in Truffaut’s introspective masterpiece, but manages little more than semi-charming style bereft of cleverness.

If The 400 Blows had insisted upon its own wisdom and depth as aggressively as Me and Earl does, it wouldn’t be a film we still talk about today.

Me and Earl and the Dying Girl seems destined to be the stand-out indie-gem of the summer, a slot held in previous years by superior films such as The Kings of Summer, The Spectacular Now, and Short Term 12. With its dynamic, fun presentation and angsty punk-portrait of the apathetic youth, it makes some amount of sense. But this is a film that tells the story of a self-centered teen learning to care for others that is handled with self-centered direction that relies on in-your-face quirkiness to stifling effect, leaving me hoping in vain for “The part where I experience something authentic.”

END_OF_DOCUMENT_TOKEN_TO_BE_REPLACED
Taylor Sinople Picks: The 16 Best Films of 2016
Form and Function in Alex Ross Perry’s “Queen of Earth&...
Digging for Fire and Unexpected: Husband and Wife Process Parenthoo...
Every Thing Will Be Fine 3D Review