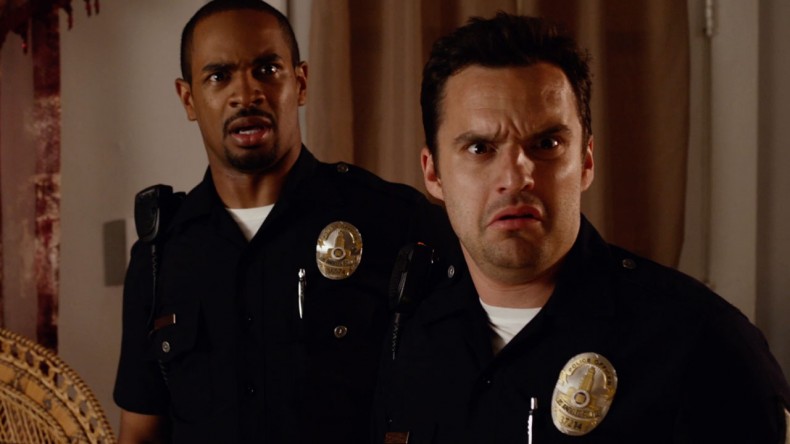 “Let’s Be Cops” is a consistently funny, if poorly paced, buddy cop movie that features some great chemistry between Jake Johnson and Damon Wayans Jr.

The “Jump Street” reboots have ushered in a new era for comedy: the self-aware throwback. Between “This is the End,” “Cabin in the Woods,” “A Million Ways to Die in the West,” and the dreadful human experiment “Movie 43,” comedy films have, once again, become such a cyclical re-hash of barely old material that they can’t wait to reference themselves. And somehow, it’s usually pretty funny. I have my own reasons why I don’t think self-awareness is the end all be all to comedy, but for the most part it’s nice to know that the people who make us laugh are doing so with their audiences.

The trend continues with “Let’s Be Cops,” a “New Girl” reunion that stars Jake Johnson and Damon Wayans Jr. as Ryan and Justin, respectively. They are, as Justin says, “30 as shit” but with nothing to show for it. Ryan continues to be an unemployed burnout, living in the glory days of his college football career that was cut short by a devastating injury. Justin, on the other hand, has a moderate amount of success as a video game designer, but doesn’t have the courage to confidently pitch his game design without his boss interrupting it and drafting an entirely new concept.

Justin’s game is a 3rd-person police simulation that he advertised using authentic uniforms from the local department. When the two roommates mistake a masquerade party as a costume party, they show up wearing Justin’s cop uniforms. After a host of awkward encounters with their former classmates – who all have jobs, kids, and lives – Ryan and Justin decide that it’d be best to leave early. While walking to their car, they’re treated like real cops, getting seductive looks from the beautiful women that walk past, and the obligation to comply from any and every passerby they encounter. Aware of their newfound power, they decide to do what any down-on-his-luck man approaching his thirties would do: become fake cops.

“Let’s Be Cops,” which was co-written and directed by Luke Greenfield, is not exactly the movie its trailers make it out to be. One could enter this movie completely expecting an extended improv session, or an episodic collection of scenes in which Ryan and Justin encounter a predictable series of kooky shenanigans that ultimately teach them the value of appreciating their own lives. But Greenfield has other things on his mind, and the result is a surprisingly well-written film that works as both a very passable modern comedy and an affectionate throwback to the heyday of 1980’s buddy cop films that is both stylistically accurate and gleefully self-aware without reaching the level of “22 Jump Street.”

The comparisons are inevitable, and though they are warranted, “Let’s Be Cops” makes a conscious effort to differentiate itself from the “Jump Street” movies both in the development of the characters and the surprisingly well-plotted 3rd act, which kicks “Let’s Be Cops” into gears I didn’t even know it had. The rapport between Johnson and Wayans is the hilarious crux of the film, and anyone who saw “21 Jump Street” is going to call them a poor man’s Schmidt and Jenko, but the chemistry is more similar to Walter Hill’s 1982 buddy cop film “48 Hrs.” And when the film enters its action-packed 3rd act, the transition feels seamless and the performances are nearly perfect.

What makes “Let’s Be Cops” as compelling as it is are the seeds planted in the first act. Greenfield’s script does a good job at continually justifying these characters and the objectively bad decisions they make throughout. In the case of Ryan, he was the guy who had his whole life figured out until a freak injury ruined everything, and he’s never given himself the opportunity to rebuild and rediscover a new passion; being a cop is something he’s really good at. Justin, on the other hand, feels invisible in a city full of artists and people with more talent and more resources than him. To him, being a cop means being noticed in a way that he’s never experienced before, and the feeling becomes a bit of an addiction.

Developing with this foundation makes everything in the film funnier, and more tragic, at the appropriate times. There are moments where Greenfield balances the action, comedy, and character work so well that I was convinced he’d be next in line to direct a Marvel picture or other, major tentpole production that requires a director who’s able to pull off what Greenfield is doing here.

The biggest issue that “Let’s Be Cops” faces is its 2nd act, which becomes a disappointment after the eager 1st act jumps into the meat of the plot about 15 minutes in. From there, the obligatory shenanigans ensue, but they go on for longer than necessary, and seeing that the film is completely capable of bigger and better things makes these slower scenes even more of a chore to get through. Johnson and Wayans prevail throughout, but there’s a certain point where Greenfield relies too much on their comfortable chemistry and not enough on the seriously well-developed plot he has devised.

By the time “Let’s Be Cops” rolls the ending credits, there’s a real sense that we’ve witnessed these two characters develop in a noticeable way. Comedies tend to shoehorn these crucial character progressions into the third act as a way of reassuring the audience that they got their money’s worth, but seeing a film as unexpectedly methodical as “Let’s Be Cops” should give audiences a taste of what they’ve been missing. It’s okay for a comedy to end with its characters entirely unchanged, but any director who is seriously interested in charting character development should take a tip from Greenfield and Co., who may just have the sleeper hit of the summer on their hands.

Josef Rodriguez is a writer, filmmaker, and musician living in New York City. He is often labeled as "that guy who didn't love Boyhood" and he finds himself liking Harmony Korine films more than he likes his own friends. When he's not stressing over turning in reviews on time, Josef can be seen playing guitar, watching "Spring Breakers," or trying to write the next great American movie.
You might also like
Damon Wayans Jr.Rob Riggle

by Chris P. on November 14, 2014
As one of Disney's most ambitious films to date, this "kid's flick" has a hearty blend of laughs, tears, and superheroes that the whole family to enjoy.
Comments
Leave a reply
Add Comment Register

END_OF_DOCUMENT_TOKEN_TO_BE_REPLACED
Taylor Sinople Picks: The 16 Best Films of 2016
Form and Function in Alex Ross Perry’s “Queen of Earth&...
Digging for Fire and Unexpected: Husband and Wife Process Parenthoo...
Every Thing Will Be Fine 3D Review