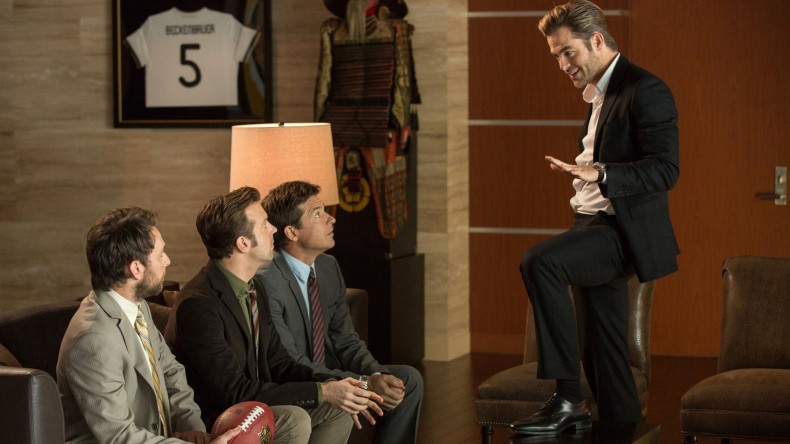 “Horrible Bosses 2” is funny and stylish enough to warrant its existence, but it never rises above the bare minimum to be considered a successful comedy.

It’s no secret that nobody was exactly clamoring for a sequel to 2011’s “Horrible Bosses,” but as the standard of the comedy film has risen to become the standard of the comedy franchise, the emergence of a sequel is less of a pleasant surprise and more of a lamentable inevitability. However, although Sean Anders’ sequel, “Horrible Bosses 2,” will never be mistaken for a great film, it’s far better than other comedy sequels in recent years, especially those of the “Dumb” variety.

Nick (Jason Bateman), Kurt (Jason Sudeikis), and Dale (Charlie Day) are finally the successful entrepreneurs they always knew they could be. With their clever invention, the Shower Buddy, this bumbling trio of wannabe killers is hoping to start a legitimate business, one that even manufactures and distributes entirely in the United States. They set up a meeting with hygiene product guru Bert Hansen (Christoph Waltz) and his hot-headed son Rex (Chris Pine), and leave with an order of 100,000 units and a sizeable stake in the profit.

They return, six weeks later, with the order finalized. However, Hansen reveals that he must cancel the order, leaving them with no money and 100,000 Shower Buddies ready to be seized by the IRS, which Hansen will then buy at auction for pocket change. Determined to not let themselves get screwed over twice in a lifetime, Nick, Kurt, and Dale devise a plan to kidnap Rex and demand $500,000 dollars ransom, but things become complicated when Rex gets involved in the kidnapping, adds another 0, and proves himself to be a classifiable psychopath.

It’s quite difficult to make people like Charlie Day and Jason Sudeikis seem unfunny on-screen. Their natural ability, alongside Jason Bateman, to make almost any situation funny is most of the reason why the original “Horrible Bosses” was so funny in the first place. Throwing three goofy, white-collar employees into a seedy underworld of illegality was a, somewhat surprisingly, perfect formula for a raunchy comedy that was just dark enough to still appeal to a wide audience.

With “Horrible Bosses 2,” director Sean Anders, who has previously helmed the terribly underrated “Sex Drive” and “That’s My Boy,” takes a decidedly riskier approach to the material, with humor so hugely inappropriate, offensive, and profane, it’s a miracle this movie was ever made. Scenes including a heated description of a sexual encounter between two 14-year old boys, among others, sometimes veer over into the unbearably awkward, but Anders brings a fresh and stylish tone to the sequel, even if things become jumbled and unfunny during the second act.

Off the bat, “Horrible Bosses 2” separates itself from the pack by not functioning as a retread of the first film. It offers clever subversions of comedy sequel tropes, like giving a fan favorite from the original more screentime, while giving its characters and situations some actual thought instead of spoon-feeding audiences the exact same experience twice over. The idea that the guys are now committing a crime less severe than murder is also a welcome surprise and serves as a clever comment on the fact that sequels often try to up the ante, not realizing that characters do progress and can even learn from their mistakes, as this trio most certainly did from their previous experience.

Chris Pine gives a shockingly demented performance as Rex Hansen, and his inclusion in the gang never feels forced or unnatural. The chemistry between the three leads is as effortless as ever, and Pine’s presence only serves to strengthen that. He’s able to hold his own comedically when necessary, but also gives it his all when the film requires him to be the entitled, sociopathic rich kid that he is. Thankfully, the performance never becomes cartoonish, and the integrity of the character is maintained throughout with a serviceable amount of development that is only heightened by Pine’s performance.

Where “Horrible Bosses 2” lacks is really the only place it needs to thrive: the laughs. All contrivances and continuity goofs can be forgiven if a comedy provides a surplus of guttural cachinnations, and, throughout most of the middle section, this movie just doesn’t fit the bill. It opens with an absolutely hilarious segment on a morning news show, featuring a hilarious cameo by Keegan Michael Key, moves into some mildly funny character interactions, but doesn’t quite pick back up again until the third act, which features a long bout of gut-busting silence that seems more attuned to a David Wain film and highlights Anders’ underappreciated comedic versatility.

Nobody can say that “Horrible Bosses 2” is a riskless film. It often, and successfully, supersedes expectations both in the rawness of its humor and the direction of its narrative, but it is not a film with any great wealth of depth. Where the first “Horrible Bosses” film was a timely, socially relevant comedy that came in the midst of a recession that had many white-collar employees fantasizing about a violent death for their employers, Anders’ sequel comes equipped with almost none of that societal self-awareness. While his sequel may actually prove to be a superior film in some aspects, it’s not nearly as fresh or, dare say, timeless as its predecessor.

Josef Rodriguez is a writer, filmmaker, and musician living in New York City. He is often labeled as "that guy who didn't love Boyhood" and he finds himself liking Harmony Korine films more than he likes his own friends. When he's not stressing over turning in reviews on time, Josef can be seen playing guitar, watching "Spring Breakers," or trying to write the next great American movie.
You might also like
Charlie DayChris PineChristoph Waltzjamie foxx

END_OF_DOCUMENT_TOKEN_TO_BE_REPLACED
Taylor Sinople Picks: The 16 Best Films of 2016
Form and Function in Alex Ross Perry’s “Queen of Earth&...
Digging for Fire and Unexpected: Husband and Wife Process Parenthoo...
Every Thing Will Be Fine 3D Review