Reviews
1
0
previous article
Review: Lucky Them
next article
The Lion King: 20 Years On 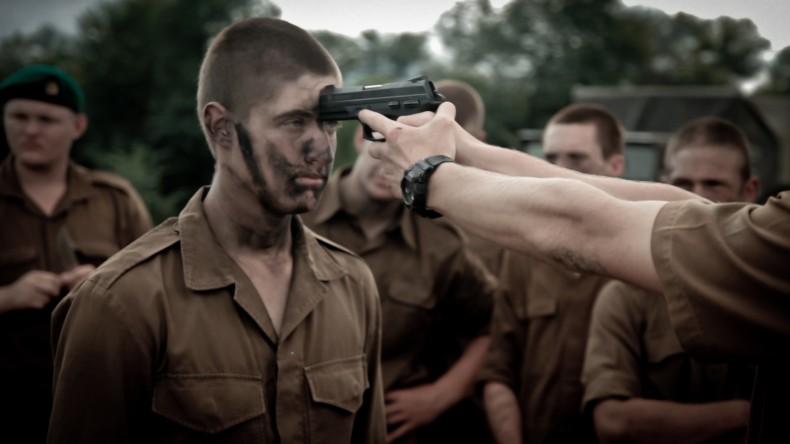 “Fatherland” is a 2013 South African documentary that follows a group of boys as they go through a military-style camp in the South African bush. Unbeknownst to the boys prior to their arrival, the camp serves not only as a sort of military experience boot camp, but also an indoctrination camp, teaching the boys that the post-1994 South Africa they’ve grown up in is dangerous and oppressive to their Boer roots, and that they must maintain loyalty to Boers first, and anything else second. Over time, the boys become more and more convinced that what Col. Franz Jooste – a former officer in the pre-1994 SADF – is saying about blacks being a menace is true. By the end of the film, they are echoing these racist sentiments, leaving the viewer to wonder what exactly the future of these boys, but also South Africa is.

There’s a great deal to love in the film. The shots are extremely well-done, especially considering that in many cases, the camera must follow the boys into the forest and across mud. The filmmakers also have a good sense of what to do to capture a given moment, sometimes using glorious swooping shots to create the idea of the emptiness around the camps, and at other points zooming in to create a sense of the claustrophobia and xenophobia.

However, the heart of the film is in the story of the boys and the camp itself. In one sense, the story of the camp is spectacularly well done. The frustration, confusion, and sheer emotion of these boys is well-conveyed, and the audience is able to hang on to their struggles, suffering and feeling alongside them. There is a very real sense of rooting for these boys and hoping they don’t succumb, though the inevitability of it remains clear as well. This is a camp designed to instil racist values, and no amount of sympathy on the part of the audience will change it.

The fact that the backgrounds of the boys are shown as well does a great deal to humanize them and paint the camp as an ambiguous place. One man – Jonker – is a recovering drug addict for whom the camp represents a chance at making a better life for himself and his family. For others, it’s a chance to know what their fathers went through in the Border War, as well as a chance to speak Afrikaans and get in touch with their heritage and history, albeit through an entirely biased perspective.

The question that the film raises is an entirely valid one. At what point, the film asks, does nationalism turn into racism? It doesn’t offer an answer, nor should it. The power of the film lies in the audience, and their ability to decide for themselves what Afrikaans nationalism is and means in the new South Africa. For this critic, the question is a profoundly difficult one, as Boer nationalism in South Africa is inextricably linked with Apartheid and its legacy, but at the same time, there is a unique culture, language, and people that ought not to be shoved into the rubbish bins in the name of historical injustice. The fact that this question is so well-raised and ambiguously discussed is a testament to Crossman’s ability to tell the story of identity in post-1994 South Africa. Equally, the fact that the question is left up to the audience to decide makes the film far more powerful and meaningful than if the film had chosen to espouse a certain side.

Perhaps the major failing of the film is its length and the abruptness of its ending. After so much time spent engrossed in the lives and struggles of these boys, the film skips straight to the end as the boys begin embrace Col. Jooste’s racist ideals. Their transition isn’t shown as well as it could be, detracting from the effectiveness of the film and its message. Instead of making the danger of these views clear, it instead seems to show that these views were there all along, something which does no one any favours in the debate about racial politics in South Africa.

Overall, “Fatherland” is a stellar documentary which, other than a few snags at the end, does an excellent job of presenting the question of identity in South Africa in an interesting and new way. Rather than beating the audience over the head with any particular view, it instead allows them to think about the issue, trusting in their ability to come to a good conclusion. It’s refreshing, and this critic is looking forward to seeing more of Crossman’s work in the future.