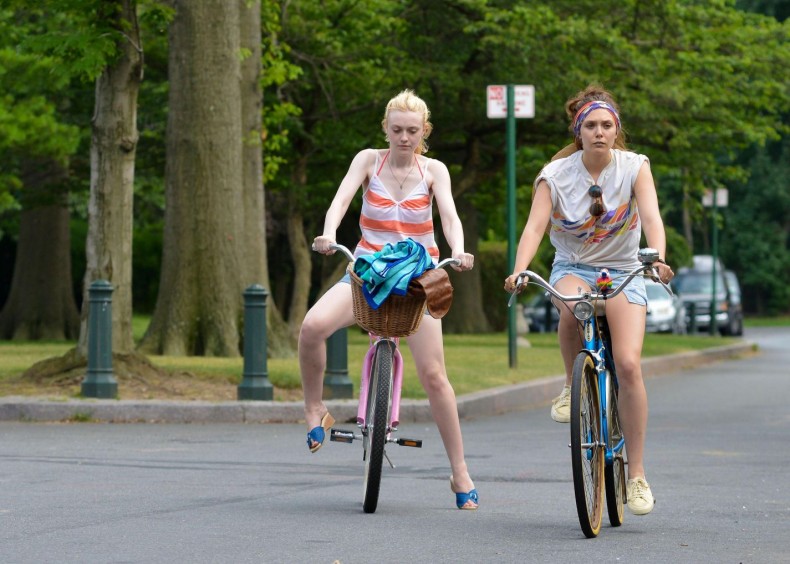 "Very Good Girls" is a beautiful portrait of the sexual awakening of two girls, elegantly directed by newcomer Naomi Foner.

“Very Good Girls” is about the introverted Lilly (Dakota Fanning) and her outgoing best friend Gerry (Elizabeth Olsen). They both graduated from high school and when summer is over, they are both going to college – but the two girls have to do one thing first: losing their virginity.

One sunny day at Brighton Beach, Gerry cycles into an ice cream cart, manned by a handsome young man, David (Boyd Holbrook). Gerry is immediately attracted to him and although Lilly is too, she is more taken aback. This until she sees black and white photographs of herself all over town and realizes she really feels something for David. A secret summer romance follows between Lilly and David, until Gerry confesses she cannot stop thinking about David. Lilly, feeling guilty for hiding their relationship from her best friend, feels herself drifting away from Gerry. Will the girls find their way back to each other before they go to college?

The whole film feels so natural and genuine. Both Fanning’s and Olsen’s performances are very well-accomplished. Fanning’s calm, timid and introverted Lilly is in sharp contrast to Olsen’s much more outgoing and restless Gerry. The dynamics between the two actresses is very believable, which makes it enjoyable to watch. As the story unfolds, both Fanning and Olsen seem to get more confident in their roles, ultimately leading to a huge fight between the two characters, as Gerry finds out Lilly has been seeing David the entire summer. The scene is honestly and genuinely acted by both actresses.

The sharp contrast between the two girls is translated into their costumes and their surroundings. Lilly wears uniform and suit-like outfits, in monochrome colors, while Gerry is dressed in bright colors and complex prints. As the film continues, the costumes follow the characters evolving from girls into women, from kids into adults. Lilly’s clothes become more revealing and figure-hugging as she becomes involved with David, symbolizing her sexual awakening.

Also the home situations of both girls is very different form each other. Lilly’s parents are on the brink of a divorce and the atmosphere is very tense at home. This is noticeable in the decor: Lilly’s house is starkly arranged, with clean lines and very little accessories, while Gerry lives with her hippie parents in a messy house full of plants and adornments, just like Gerry’s clothes. The design matches with the characters and their costumes, which makes for a thorough and impressive production.

Jenny Lewis, a young singer songwriter and a good friend of director Naomi Foner, does the entire soundtrack of “Very Good Girls.” The combination of the acoustic guitar, quirky piano tunes and soft violins, fits the atmosphere of the film: young, innocent, spirited, urban and genuine. Lewis’ timid-yet-confident voice accompanies the girls in this thrilling phase of their lives, almost as if the music is a third main character.

“Very Good Girls” is Naomi Foner’s directional debut and what a tremendous one. Foner is known as a screenwriter and for being the mother of actors Jake and Maggie Gyllenhaal, but from now on, she should be known by her directing. She very delicately and elegantly tells the story of the sexual awakening of two best friends. The slow pace of the film makes you think of what it feels like to be in that phase of your life – you desperately want to be an adult, but simultaneously want to be frozen in time and not grow up too fast.

Although “Very Good Girls” is an exceptional debut by Foner, the film does not give many surprises or build-up. Even at the beginning of the film you can feel that you’re in for a predictable ending and how the characters are going to evolve – but somehow, this does not matter. The fact that the film does little for surprising or shocking the audience does not mean that “Very Good Girls” doesn’t deliver – it certainly does.

Eden is a student, living in the Netherlands, dreaming of a journalist career. She writes, reads and spends a lot of her time at the local cinema - all in preparation for the previous stated career, of course. Apart from British drama series, writing novels and strawberry shortcakes, Eden loves everything about films: watching films, writing about films, discussing films at the dinner table… everything.
You might also like
Boyd HolbrookClark GreggDakota FanningElizabeth Olsen

by Jakob Johnson on October 6, 2014
Our "Double Exposure" reviews pit two or more critics against one another on the same film to hash out their differences in opinion. Agree with what we have to say or want to offer your own take? Leave it in the comments below.
comments
Leave a reply
Add Comment Register

END_OF_DOCUMENT_TOKEN_TO_BE_REPLACED
Taylor Sinople Picks: The 16 Best Films of 2016
Form and Function in Alex Ross Perry’s “Queen of Earth&...
Digging for Fire and Unexpected: Husband and Wife Process Parenthoo...
Every Thing Will Be Fine 3D Review