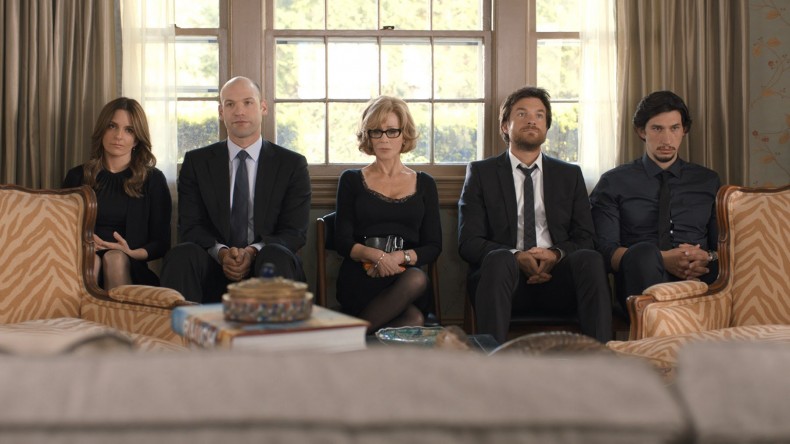 “This is Where I Leave You” needs to be left alone. It wastes the year’s best cast with a cliched, schlocky, and dull script that does its performers absolutely no favors.

“This is Where I Leave You” opens as many other familial comedies do: with a group of estranged and miserable siblings, children, and parents all forced to reunite for one reason or another. Judd (Jason Bateman) has just walked in on his wife (Abigail Spencer) sleeping with his boss (Dax Shepard). The next day, Judd gets a call from his mother (Jane Fonda), informing him that his father has died. As one could surmise, this is really not his week.

At the funeral, he sees his brothers and sister – Paul (Corey Stoll), Philip (Adam Driver), and Wendy (Tina Fey) – for the first time in years. As with all siblings, they interact as if they had never left the house, and catch each other up with what’s going on in their lives. Wendy is in an unhappy marriage, still in love with the “boy next door,” Horry (Timothy Olyphant), who was forced to stay in their hometown after a massive brain injury. Paul is unsuccessfully attempting to have a child with his wife Alice (Kathryn Hahn), who is desperate to get pregnant by any means necessary. Philip, on the other hand, is in a serious relationship with his therapist (Connie Britton), a woman in her mid-40s who is all too self-aware about their romantic situation.

Forced to sit shiva for seven days, a Jewish mourning tradition in which all members of the immediate family sit together for a designated amount of time each day to reflect, the Altmans are given an opportunity to work out their issues with each other, and with themselves, for the first time since they all left home. But the family is nothing if not stubborn, and the only thing they can do is sit and wait with a smile on their face, pretending everything is fine.

Thus is the gist of “This is Where I Leave You,” the latest, and greatest, disappointment from Shawn Levy, a man who, with each film, continues to chip away at the foundation of comedy filmmaking with groan-inducing, sophomoric humor, and a laundry list of cliche that will probably spawn its own drinking game. Equipped with a staggering roster of talent and critically acclaimed source material, “This is Where I Leave You” should have been the film where Levy proved wrong everyone who ever said he couldn’t make a good movie.

Alas, he does not. Instead, he continues to prove them right at magnitudes even greater than before, if only because of the cast that’s been compiled. With a more assured voice behind the camera, “Where I Leave You” could have been one of the year’s best films. Instead, it’s a “Big Chill” remake directed by Zach Braff, and not in the good way. From the well-meaning buffoon who shows up late and loudly to the funeral service, to the roof that seems to have been designed for sitting, Levy can’t help but stuff every single dramedy cliche into his film, resulting in an amalgamation of ideas that never coheres past a series of great performances.

Jason Bateman, who played completely against type in this year’s “Bad Words,” turns in another subtly affecting performance as a broken man trying desperately to clean up his mess before anyone sees. Bateman has been unfairly criticized for always playing similar characters, but his work in “Where I Leave You” proves that his ability to carry a film is seemingly effortless, even one filled with this many talented people. Rose Byrne and Adam Driver also put in extremely strong supporting performances, with Byrne deviating from her usual style to give life to the film’s most woefully underwritten character.

Kathryn Hahn, on the other hand, has proved that she is more than capable of handling rich, layered characters. Yet, her role in this film amounts to nothing more than a slightly more serious riff on her work in “Step Brothers.” It’s such a shame to see her reverting back to the disgruntled housewife trope that she so brilliantly deconstructed in Jill Soloway’s “Afternoon Delight,” and I really hope she breaks away from this trend before it’s too late. Corey Stoll, too, who did some great work on “House of Cards,” is almost literally in the background of this entire film, often forced to piggyback on conflicts concerning the surrounding characters.

There are things to enjoy in “This is Where I Leave You,” enough to keep it from being painfully bad, but that’s not much of a compliment for a film that should have, and probably could have, been much better. The uniformly excellent character work keeps it from being a complete disaster, especially during the more inane exchanges of dialogue, but it just wasn’t ever enough. At best, this will be enough to keep anything touched by Shawn Levy off a movie screen for at least a couple of years. At worst, we probably have enough material to launch that drinking game.

Josef Rodriguez is a writer, filmmaker, and musician living in New York City. He is often labeled as "that guy who didn't love Boyhood" and he finds himself liking Harmony Korine films more than he likes his own friends. When he's not stressing over turning in reviews on time, Josef can be seen playing guitar, watching "Spring Breakers," or trying to write the next great American movie.
You might also like
Adam DriverJason Batemanrose byrneshawn levy

END_OF_DOCUMENT_TOKEN_TO_BE_REPLACED
Taylor Sinople Picks: The 16 Best Films of 2016
Form and Function in Alex Ross Perry’s “Queen of Earth&...
Digging for Fire and Unexpected: Husband and Wife Process Parenthoo...
Every Thing Will Be Fine 3D Review