Reviews
2
0
previous article
Review: The Unbeatables
next article
The Art of “The Hustler” and the Allure of the On-Screen Gambler

Review: The Trip to Italy 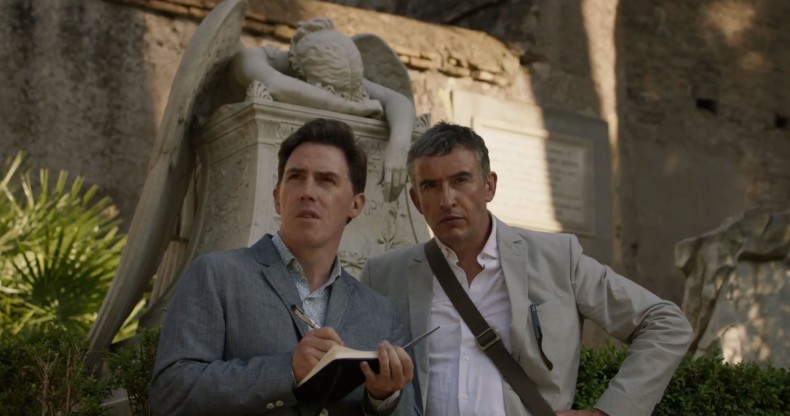 Bitingly funny and more dramatically rewarding than the original, "The Trip to Italy" is a completely necessary sequel that offers more outstanding conversations, arguments, impressions between leads Steve Coogan and Rob Brydon.

After their successful culinary tour through Northern England, The Observer rehires actors Steve Coogan and Rob Brydon for another round of food reviews, this time as they travel through the Italian countryside. From Camogli through Rome and Capri, Coogan and Brydon (playing semi-authentic versions of themselves) zip around Italy in a Mini Cooper to six stunning restaurants and four-star hotels as they become reacquainted over fine dining and a scathing competition of insults and impressions ensues.

Like Michael Winterbottom’s original 2011 BBC Mini-Series “The Trip,” “Italy” was recut to feature length for distribution in the US. With the second series and film, Winterbottom beefs up his sequel with a bit of forward-moving momentum and shades of a functioning drama beyond the many witty and acerbic dialogue centerpieces. Coogan’s fictional son (Timothy Leach) joins the duo late in the film, and the Brydon character enters a brief affair with a crewwoman on a private boat (Rosie Fellner) and considers the ramifications of continuing it.

That isn’t to say he’s taken Coogan and Brydon into an entirely different film. One of the best things about “Italy” is that it’s more of the same. The spectacular food, conversational comedy, and pop culture impressions (Michael Caine, Al Pacino, De Niro, and more) all return but are filtered through the universal concerns of two aging friends warily approaching reflection on what they’ve made of their lives.

The primary mode of “The Trip to Italy,” though, is still conversation over plates of first class food. And like the original film, Winterbottom doesn’t dumb the references down, writing in rapid fire references that work as a trivia challenge to the audience. There’s a very present timeliness to it, too — an argument about who is more indistinguishable in “The Dark Knight Rises,” Christian Bale’s Batman or Tom Hardy’s Bane, gives way to talk on the utter failure of most movie sequels.

These are 10+ minute dining scenes that Winterbottom rightfully has complete confidence in. He often cuts between only two different medium shots of the characters over an entire meal, and the takes can roll on for minutes at a time thanks to the undeniable chemistry between the leads and the improvisational spirit of their reluctant friendship. Coogan puts on a relentless attitude of disdain towards Brydon, but can’t help himself from cracking up when they dig into a particularly spot on impression.

Quick glimpses of the food preparation and final dishes are thrown in, but there’s a disappointingly small emphasis placed on the actual food. Still, if the film isn’t going to really be about the food, what it is about is effortlessly watchable. By way of a device to allow the duo to process certain feelings aloud, Winterbottom pens an excellent layer to the plot that has the two travelers using their time in Italy as an opportunity to trace the steps of Lord Byron and Percy Shelley. At this stage in their lives as famous performers, Coogan and Brydon are becoming interested in legacy, in how they’ll be remembered when they’re gone (Coogan mentions he’s already counting an eventual lifetime achievement award in his collection of BAFTAs).

Romantics like Byron and Shelley are a great analogue with which to focus their concerns and aspirations for greatness. It’s all sort of snuck in, though, and while there’s rarely a moment not infused with a sardonic smile or crass joke, the cumulative effect is a film far more emotionally affecting than its predecessor.

Taylor is a Chicago-based writer and aspiring film historian. He is the editor here at TFP, and has contributed to a number of international publications such as Cinema Scandinavia, PopMatters, and Room 101 Magazine. He can also be found listening to podcasts, researching topics he has little use for, or running after a city bus.
You might also like
Rob BrydonSteve Cooganthe trip to italy

by Jess Brooman on August 24, 2014
"The Unbeatables" is a visual treat for the kids, and the football satire is a laugh for the adults, but the script is let down by a tepid romantic subplot, and a particularly anti-climatic finale that fails to rouse audiences as much as it hoped to.
Comments
Leave a reply
Add Comment Register

END_OF_DOCUMENT_TOKEN_TO_BE_REPLACED
Taylor Sinople Picks: The 16 Best Films of 2016
Form and Function in Alex Ross Perry’s “Queen of Earth&...
Digging for Fire and Unexpected: Husband and Wife Process Parenthoo...
Every Thing Will Be Fine 3D Review