Review: The Theory of Everything 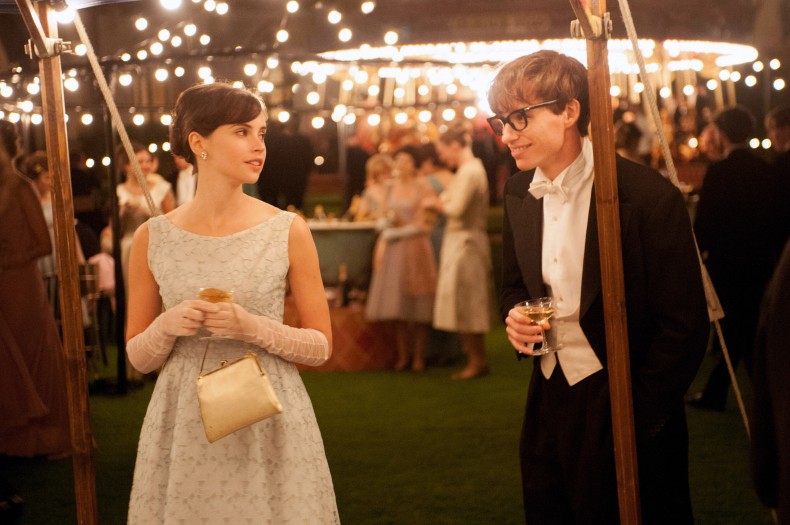 Despite the two brilliant lead performances, "The Theory of Everything" finds director James Marsh's vision for the film clashing with the material in a push-pull game between soaring romance and serious biopic that leaves neither genre fully tapped.

If there’s a single thing to gleam from James Marsh’s past few films, which are as diverse as “Man on Wire,” a documentary chronicling a 1974 tightrope stunt, and “Shadow Dancer,” a Belfast-set political thriller, it’s that he’s not afraid to take risks to explore real-world stories in whatever genre and tone is appropriate for the material that he’s drawn to. The trouble with “The Theory of Everything” is that Marsh, for the first time, asserts his own influence over the presentation and pursues a tone that the material isn’t asking for. The result is a “life and work” portrait of the great theoretical physicist Stephen Hawking that doesn’t quite know how to balance the “life” and the “work” in the midst of fiercely competing agendas. It’s a biopic that limits the potential of its moving romance; a romance that pulls focus away from the fascinating biopic.

The conceptual basis of the film, though, is a good one. Marsh is aware that his film will enter a dialogue with many other, better tellings of Hawking’s scientific advancements, so he places that part of the scientist’s life on the backburner in exchange for a penetrating look into the challenges and struggles of Hawking’s complex first marriage. Screenwriter Anthony McCarten is working from Jane Hawking’s autobiography, Traveling to Infinity: My Life with Stephen, and uses her candid, intimate stories to capture a relationship that’s acutely affected by disability.

It begins in Cambridge in 1963, when Stephen Hawking (Eddie Redmayne), with a clumsy sort of walk, thick framed glasses, and a sharp bow tie, is but one in a sea of PhD students. He can be seen racing around campus on a bicycle, or out at a party – like the one at which he meets Jane (Felicity Jones), an arts and culture student.

In her book, Jane recalls this moment, writing, “Clearly here was someone, like me, who tended to stumble through life and managed to see the funny side of situations. Someone who, like me, was fairly shy, yet not averse to expressing his opinions; someone who, unlike me, had a developed sense of his own worth and had the effrontery to convey it.”

Hawking possesses a great theoretical grasp over big-picture physics such as the movement of the stars and the attributes of black holes, and he works with doctoral advisor and leading physicist Dennis Sciama (David Thewlis, of “Harry Potter” fame) to apply mathematics to his ideas. He’s dating Jane and nearing the end of his graduate studies when an injury sends him to the hospital where doctors discover he has ALS, a motor neuron disease more commonly known as “Lou Gehrig’s Disease.” His condition quickly worsens as his motor functions deteriorate. Soon he is struggling to walk and speak. With two years to live, his father remarks, “This will not be a fight, this will be a heavy defeat.”

Of course, while Hawking’s condition will continue to worsen until he is bound to a wheelchair, communicating with the slow, measured aid of a computer, he will, in fact, live to fight for decades to come (he is currently aged 72). Through much of this time, Jane stays by his side – operating as wife, caretaker, and translator. They bear three children together, to the disagreement of many around them who view Stephen’s condition as a prohibitor to a successful family.

Marsh wanders into the weeds with his narrative, but there’s little more that could have gone right with the casting. Felicity Jones (“Like Crazy,” “The Invisible Woman”) carries the complexity of Jane’s struggle with great tact on screen – revealing the moments of both strength and frustration she goes through in her marriage. Her role is as emotionally demanding as Redmayne’s is physically. In the end, though, it’s Redmayne’s remarkable likeness and powerful rendition of the disease that will be the talk of “The Theory of Everything.” As he is stripped of the ability to convey his personality in conventional ways, Redmayne brings Hawking’s wit, humor, and intellect to life with mere facial expressions and murmured words. He flirts and jokes, drawing laughs from the audience with little more than his eyebrows.

Beyond the vibrant life that Redmayne finds inside Hawking at all stages of health, it is translating his raw intelligence to the screen that becomes the greatest challenge. Marsh runs into a classic biopic problem here: how do you convey brilliance when the output of that brilliance is ideological, theoretical, or mathematical? Hawking has no iconic moment, no key-on-a-kite experiment. Instead, through careful study and slow work, he changes the way we understand the timeline of the universe. This is fascinating, but not very exciting to watch on-screen. Marsh gets around it in some disappointing ways, all but dumping the bucket of clichés onto the screenplay. Hawking solves a few “impossible questions” overnight to the disbelief of his class, has a “brain blast” moment, and embarks on a montage of chalkboard equation scribblings. It’s in the treatment of these moments, the over-simplification of his life’s work and reduction of process to montage, that Marsh reveals an obligation bordering on disinterest to the scientific achievements of Hawking’s life.

What does work is where the film ultimately lands on its sympathy for its subject. There is a scene near the end in which Hawking speaks on stage to a group of students and receives a standing ovation – a moment so over-baked that it’s nearly baiting the movie’s audience to do the same. The scene is saved, though, by a brief moment of fantasy that shows, while Hawking is an inspiration and a very lucky man, what he has accomplished despite his disease doesn’t erase the pain of what he’s lost because of it.

When looking at competing with more science-minded works on Hawking, from from the 1991 Errol Morris doc “A Brief History of Time,” to the 2004 Benedict Cumberbatch-fronted BBC film “Hawking,” it’s understandable that Marsh would stray to the domestic struggle in an attempt to set apart his film, but it’s not entirely beneficial. By the end, we don’t really have any firm grasp on what exactly Hawking discovered and how he discovered it. This is a man that Jane describes as in love with physics and the possibilities of science, and that crucial passion is missing here. The publishing of Hawking’s most significant work, A Brief History of Time, is handled in all but a few quick shots, and there’s little discussed on his peculiar understanding of religion and science.

So this is the relationship-drama story, not the science story, fine. But then why does everyone involved in the production willfully turn a blind eye to the ugly parts of the story? The end of Stephen and Jane’s marriage and his immediate remarrying in particular is essentially left to assumption and a quick title card at the end. Does Marsh care to tell the true story, or the one that will rally the applause?

A hugely affecting final sequence won’t leave many dry eyes, and the performances from the two leads stand higher than anyone asked of them, but “The Theory of Everything” is fundamentally only a piece of the life and work of Stephen Hawking. With the right outlook, Marsh’s film is a wonderful addition to the shelf of Hawking adaptations, but it’s not the definitive one, and it’s a sure letdown for anyone looking to understand more about this iconic scientist’s science. In a word, it’s underwhelming. In a few more, it’s limited in scope for mostly good reasons, but allows those limitations to box it in rather than provide it a niche it can flourish in.

Taylor is a Chicago-based writer and aspiring film historian. He is the editor here at TFP, and has contributed to a number of international publications such as Cinema Scandinavia, PopMatters, and Room 101 Magazine. He can also be found listening to podcasts, researching topics he has little use for, or running after a city bus.
You might also like
David ThewlisEddie RedmayneSimon McBurneyThe theory of everything

by Taylor Sinople on August 17, 2014
"The Zero Theorem" brings together Terry Gilliam's bold imagination and Christoph Waltz's immense talent for a film that resonates as both a wildly fun watch and a though-provoking piece of science fiction.

by Taylor Sinople on January 27, 2014
Visionary filmmaker Terry Gilliam – responsible for such hit-or-miss sci-fi epics as “Brazil,” “12 Monkeys,” and “The Imaginarium of Doctor Parnassus”- will release his 2013 film “The Zero Theorem” to UK audiences on March 14, 2014 (US release date still TBA). Gilliam returns to his much frequented near-future setting to revisit the type of colorful, […]
comments
Leave a reply
Add Comment Register

END_OF_DOCUMENT_TOKEN_TO_BE_REPLACED
Taylor Sinople Picks: The 16 Best Films of 2016
Form and Function in Alex Ross Perry’s “Queen of Earth&...
Digging for Fire and Unexpected: Husband and Wife Process Parenthoo...
Every Thing Will Be Fine 3D Review