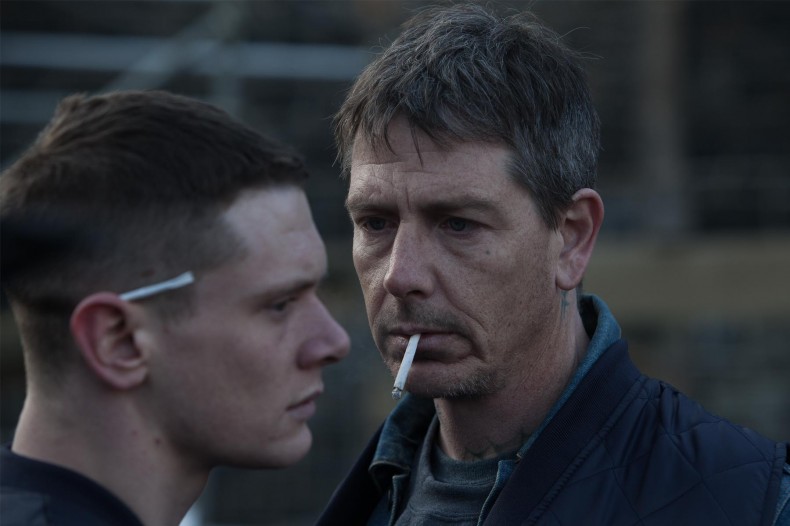 Filled with gut-wrenching performances and not a hint of sentimentality, “Starred Up” is a raw, emotional journey into one of the UK’s most dangerous prisons.

Great prison cinema is often microcosmic, confronting themes that reflect our culture in ways that are seldom uncovered through direct depictions. In David Mackenzie’s “Starred Up,” the reflection is on the prison system itself, and how it’s no longer in the business of rehabilitation, but extended incarceration. In the film’s opening scene, we see Eric Love (Jack O’Connell), a 19-year old offender who’s been “starred up,” go through the motions of being admitted into the prison. The copious searches, pat-downs, and regulations are shown in excruciating detail, all leading to his new home: the claustrophobic comfort of a single-man cell.

Eric is there not one day before hospitalizing another inmate after mistaking him for an attacker. Already on the fast-track to solitary confinement, Eric is given another chance when he’s spotted by Oliver (Rupert Friend), an anger management and grief counselor who works with inmates looking to improve themselves during their time. Saddled with his own demons, Oliver has trouble getting through to Eric, but is able to reach a compromise with him when they both agree that Eric’s betterment means confronting his well-meaning but invasive father, Neville (Ben Mendelsohn), who is also serving a long-term sentence in the same wing.

With no formal score, relatively sparse dialogue, and unflinchingly realistic brutality, David Mackenzie’s “Starred Up” offers a truly disturbing and consistently compelling portrait of how the prison system treats its most severe offenders in the 21st century. As Eric Love, Jack O’Connell gives one of the year’s most accomplished performances. Infusing Love with the perfect amount of ruthlessness and underlying sensitivity, O’Connell accomplishes the rare feat of portraying a character who constantly makes bad decisions, but not one that we ever decide to stop rooting for. Eric’s plight in the film is a surprisingly relatable one, and the attitudes of the prison’s administration are nearly Kafkaesque; although Eric is quite clearly making progress with Oliver, they still insist that he’s completely beyond reach.

As Eric’s father, Ben Mendelsohn gives another note-perfect performance. What makes the relationship between Eric and Neville so absorbing is that neither come to the table withholding malevolence. Eric needs his father to understand that he can’t suddenly take on the role of protector after being out of his life for more than a decade, while Neville needs his son to understand that all he wants to do, all he really can do in a place like this, is protect his boy. It’s a classic father-son dynamic that, when explored in a maximum security prison, becomes a strikingly original direction. When one considers how nearly every prison film has a father-figure type that guides the fearful protagonist through his first few weeks in lockup, Mackenzie’s decision to stray away from that and establish a true blood connection pays off thematically.

Written by Jonathan Asser, a former prison psychologist, the film’s script has the wherewithal to sympathize with most of its characters through the scenes involving group therapy or exposition that would otherwise be routinely filled with empty threats and mean mugging. As Asser’s surrogate, Rupert Friend is extremely solid, and the script does right by not divulging too much of his background, leaving the viewer to know him only as much as Eric does. It seems necessary to note that “Starred Up” is by no means a “Dangerous Minds: Prison Edition.” Viewers expecting to see how the lowly prison therapist will completely transform an entire facility into cooperative, productive members of society are watching the wrong movie. Mackenzie allows nothing to distract the viewer from what’s happening on-screen, and viewers should not mistake the overflowing of emotion with a feeling of sentimentality. Asser brilliantly characterizes his inmates with a subtle sensitivity, one that is often hidden beneath layers of a fragmented past that never get washed away for the sake of conventionality.

If there are criticisms to be had, they should be directed mostly at the prison’s administration, who are characterized mostly as Big Bad Warden types with no regard for the betterment of their prisoners. While this may be an accurate reflection in terms of ideology, the portrayal is so blatant that the film stumbles whenever they are given any screentime which, thankfully, is fairly brief. One character in particular, Governor Hayes (played with as much conviction as possible by Sam Spruell), is laughably evil, and his actions in the third act threaten to derail the film entirely. Thankfully, when Mendelsohn, both literally and figuratively, comes to save the day, “Starred Up” is able to get back on track.

Although “Starred Up” is not going to define a genre in the same way as 2009’s “A Prophet,” it’s still an extremely affecting film, one that features two of the year’s best performances and some wonderfully bare direction by David Mackenzie. Not for the faint of heart, “Starred Up” will never be mistaken for a feel-good film, but it’s undeniably hopeful and emotionally rich in ways that other, more conventionally sentimental films never are. The film makes the case that the only thing harder than dealing with an outpour of uncontrollable emotion is having to appear soulless in order to survive.

Josef Rodriguez is a writer, filmmaker, and musician living in New York City. He is often labeled as "that guy who didn't love Boyhood" and he finds himself liking Harmony Korine films more than he likes his own friends. When he's not stressing over turning in reviews on time, Josef can be seen playing guitar, watching "Spring Breakers," or trying to write the next great American movie.
You might also like
ben mendelsohnJack O’ConnellRupert Friendstarred up

END_OF_DOCUMENT_TOKEN_TO_BE_REPLACED
Taylor Sinople Picks: The 16 Best Films of 2016
Form and Function in Alex Ross Perry’s “Queen of Earth&...
Digging for Fire and Unexpected: Husband and Wife Process Parenthoo...
Every Thing Will Be Fine 3D Review