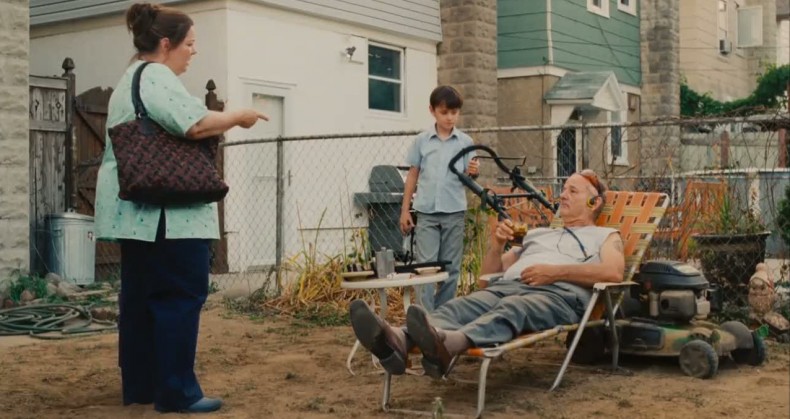 Bill Murray may be able to do pretty much whatever he wants, but he shouldn’t be making bad movies. And St. Vincent is a bad movie.

The middle-aged Bill Murray renaissance that’s been going on for the last few years is an entertaining diversion from the mundanity of day-to-day existence. He shows up somewhere random, takes some photos, turns in a decent performance once in a while to remind us why we love him, everybody’s happy. Unfortunately, that penultimate requirement, the one about being in good movies, has been coming up short in the latest quotas.

Murray has enjoyed more success in his later years than most actors do in their entire careers. For the most part, he knows which high-profile indies to pick (“Lost in Translation,” “Broken Flowers”), but isn’t afraid to go tongue-in-cheek for a cult comedy or two (“Space Jam,” “Zombieland”). There’s little to dislike about him as both a person and an actor, and his mass appeal to nearly every generation is nothing short of impressive.

But recently, Murray seems to be focusing more on his public antics and less on the roles he picks, as evidenced by his last four non-Wes-Anderson-related roles. There was almost nothing to like about “Passion Play,” “A Glimpse Inside the Mind of Charles Swan III,” “Hyde Park on Hudson,” or “The Monuments Men,” and Murray seemed to, sans “Hudson,” waltz on and off screen in a distant malaise. Even his work with Anderson has been reduced to glorified cameos, and one can’t help but think that Murray may just be tired of making movies.

Anyone deciding to make that case can definitely use “St. Vincent,” the debut feature of Theodor Melfi, as ammunition. Murray stars as the grumpy and grouchy Vincent, a Brooklyn native who winds up being an after school babysitter when newly divorced Maggie (Melissa McCarthy) and her young son Oliver (Jaeden Lieberher) move in next door. Saddled with debt from an impatient loan shark (Terrence Howard), a prostitute he accidentally impregnated (Naomi Watts), and six months of bills from a care facility servicing his dying wife, Vincent is in what most people would call a sticky situation.

Of course, Vincent and Oliver begin bonding, teaching each other invaluable lessons about life and having a ton of fun along the way. We learn more about why Vincent is such a grouch, he teaches Oliver a couple dirty words and in the end everybody’s happy, but not before Vincent has a massive stroke, his wife dies, and the loan sharks suddenly stop bothering him because he’s recovering from a massive neurological disorder.

If any of this sounds completely infuriating to you, it doesn’t really get much better. There are laughs to be had throughout the film, and newcomer Jaeden Lieberher really is a joy to watch, “St. Vincent” is a film that seems to have been drafted entirely for the purpose of letting Mr. Murray “do his thing” for a while. The film’s heavily sentimental material says otherwise, but what comes off is little more than a showcase for the Murrayisms that take up most of the film’s runtime.

Melissa McCarthy acts like a normal human being for once, which is refreshing, but her character is so wholly one-dimensional that I almost wished she would refer to someone by a creatively insulting nickname or tip the balance of arguable androgyny. Naomi Watts throws on a thick Russian accent and a pound of makeup in what is quite possibly the most bizarrely horrible performance of her career. In fact, director Melfi seems content to cast actors in roles they obviously should not be doing, and the only two actors who display any ounce of comfortability in their roles are Chris O’Dowd as Oliver’s predictably hilarious Catholic school teacher, and Jaeden himself, who is played with subtlety and heart by Jaeden Lieberher, who turns hackneyed material into something, at the very least, genuinely watchable.

It’s difficult to hate a film that seems as genuine about its desire to please as this one is, but it’s even more difficult to like a film that is so obviously drowning in indecision and sentimentality. For the first hour, the film never quite goes where you expect, but it also doesn’t necessarily go where you want it to either, only to come back around and, you guessed it, go exactly where you expect. The legacy of Bill Murray is immortalized at this point, so he’s allowed to do what ever kinds of projects he sees fit, but that doesn’t mean anyone has to, or even should, watch them.

Josef Rodriguez is a writer, filmmaker, and musician living in New York City. He is often labeled as "that guy who didn't love Boyhood" and he finds himself liking Harmony Korine films more than he likes his own friends. When he's not stressing over turning in reviews on time, Josef can be seen playing guitar, watching "Spring Breakers," or trying to write the next great American movie.
You might also like
Bill MurrayChris O’DowdMelissa McCarthyNaomi Watts

Review: Dumb and Dumber To

by Josef Rodriguez on November 16, 2014
"Dumb and Dumber To" is not only the most disappointing sequel to a classic movie ever made ("Godfather III" included), it's also the worst film of the year.
Comments
Leave a reply
Add Comment Register

END_OF_DOCUMENT_TOKEN_TO_BE_REPLACED
Taylor Sinople Picks: The 16 Best Films of 2016
Form and Function in Alex Ross Perry’s “Queen of Earth&...
Digging for Fire and Unexpected: Husband and Wife Process Parenthoo...
Every Thing Will Be Fine 3D Review