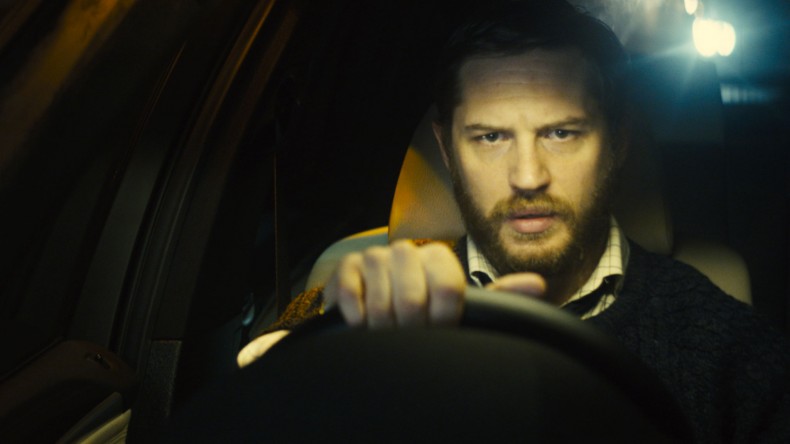 “Locke” is a tour de force of black box theatre style filmmaking that uses only one on-screen actor to tell a story that is both ordinary and thrilling.

Developing a film with one primary actor and location isn’t all that rare these days, but that choice is usually motivated by some catastrophic event that leaves our hero stranded like James Franco in a rock crevice in “127 Hours,” Robert Redford at sea in “All is Lost,” or Colin Farrell in the titular “Phone Booth.” As the list goes, from comedic bottle episodes to locked-in-a-room horrors, it becomes apparent that these mono-location features are all being driven by a common element: entrapment. “Locke” is different. It dares to tell an everyday story in a production mode we associate with those high-stake disaster films. Here, there will be no guns or bomb plots. Only Tom Hardy, driving a car and talking on the phone for 85 minutes – to the utter captivation of the audience.

Ivan Locke is the construction manager overseeing a historic cement pour that will mark the largest foundation work done in European architectural history. The night before the pour, Ivan calls his boss on the way home from work to explain that, despite the tens of millions of pounds riding on his ability to direct the operation in the following morning, he won’t be able to make it. He calmly explains that he accepts that he will lose his job, but that he has no other choice and must manage the pour by phone. He hangs up before getting a response and calls his wife, telling her he won’t be coming home tonight. The ensuing 90-minute drive from Birmingham to London is a tense, edge-of-your seat dramaturgical exhibition in which a series of phone calls begin to tear apart Ivan’s life.

You could find the cause of Ivan’s race across the country in the middle of the night, but I wouldn’t recommend it. English director Steven Knight doesn’t show his cards in the film’s official trailer, and rightly understands that his very intimate film lives and dies by the entrancement that takes place when viewers go into the screening blind – gathering details and putting together the story for the first time in the theater. Is this a slow-burning thriller escalating to a shocking conclusion or a domestic drama about a man who made a simple mistake? Driving on the highway at night is a hypnotic enough experience. Capture that on screen and play it in a dark room for 90 minutes and the mood becomes palpable – it stays on you for the rest of the day.

As a construction manager, Locke knows all about the importance of building sound, concrete relationships. “One mistake and the world comes falling down on you.” Locke is a guy that must have all the answers; that must use logic and compartmentalization to solve each problem he faces one at a time without emotion or panic. But that approach won’t work in his personal life, as he quickly discovers while fielding relentless calls from his wife, children, and co-workers.

Knight, the writer of English thrillers such as “Eastern Promises” and “Closed Circuit,” directs “Locke” as only a screenwriter could. Forgoing the traditional “assembly” style of production that has scenes shot out of order and cut together later, Knight chose to shoot the entire film twice a night for eight days. The result was sixteen full versions of the film to pull from in the final cut. Initially, it may not seem unreasonable to shoot this entire film twice over in a single – it is essentially a black-box theatre piece, after all – but the procession of phone calls that Ivan both makes and receives would require masterful orchestration. As it turns out, the rest of the cast (which includes some of England’s best character actors such as Olivia Colman, Ruth Wilson, Ben Daniels, and Andrew Scott) sat around a conference table in a nearby hotel and actually performed the many phone calls live every night. Gathering sixteen of these run-throughs guarantees every interaction is as authentic as it’ll ever be. Shooting with those voice-only actors live helps “Locke” feel populated with vivid characters despite the fact that only one actor actually appears onscreen.

Where histrionics would be the go-to impulse for any other actor given this sort of opportunity, Hardy (“Bronson,” “The Dark Knight Rises”) only simmers with a unique, soothing Welsh accent and a confident, calm demeanor. Knight is aware that being locked in a car for an entire film can overstay its welcome, and smartly restricts the film to 85 minutes. But after the first ten minutes during which the audience adjusts to the real-time pace, most would be willing to watch Hardy for a full two hours – he’s that good.

Visually, however, “Locke” does tend to get in the way of Hardy’s performance with an irritating insistence on cross-fading images. The headlights and taillights of cars are constantly being layered on top of close-ups of Ivan where a simple long take would suffice. In another inexplicable move, Knight includes several scenes – none of which work – of Ivan speaking out loud to his “father” who has long ago passed away. This is a way for Ivan to have something to do when he’s not on the phone and truly alone in the car, but it’s handled in a way that at first suggests Ivan actually sees his father with him in the car – an unintended extra layer that wrongly prompts, “wait, is he crazy?” These scenes would work well in a novel, but Knight shows a bit of his directorial inexperience by inserting them to unnecessarily assert Ivan’s moral goodness – something that is self-evident through his actions.

Forgiving those short moments, “Locke” is still much more than a new “experience” film with the catchy “monolocation” hook. Knight lays the foundation in the screenplay and Hardy makes it tower over similar films that need life-or-death stakes to keep the plot moving and the viewer watching. “My Dinner with Andre” was so remarkable in 1981 (and is to this day) because it is truly nothing more or less than Wally’s 90-minute dinner, with Andre. Here, everything that happens could be taking place inside any car you pass on the road. Yet, “Locke” is ceaselessly watchable and demands edge-of-your-seat attention with nothing more than a story of an ordinary man who is dealing with the consequences of an every-day mistake.

Taylor is a Chicago-based writer and aspiring film historian. He is the editor here at TFP, and has contributed to a number of international publications such as Cinema Scandinavia, PopMatters, and Room 101 Magazine. He can also be found listening to podcasts, researching topics he has little use for, or running after a city bus.
You might also like
Tom Hardy

by Taylor Sinople on September 14, 2014
Editor’s note: Our “Double Exposure” reviews pit two or more critics against one another on the same film to hash out their differences in opinion. Agree with what we have to say or want to offer your own take? Leave it in the comments below. The Rundown Taylor Sinople Final Rating: 7 out of 10 Bottom […]

by Zack Miller on June 29, 2014
The exciting neo-Western "Lawless" is new to Netflix Instant this week, along with a Disney favorite and some new hijinks from the Jackass crew.
comments
Leave a reply
Add Comment Register

END_OF_DOCUMENT_TOKEN_TO_BE_REPLACED
Taylor Sinople Picks: The 16 Best Films of 2016
Form and Function in Alex Ross Perry’s “Queen of Earth&...
Digging for Fire and Unexpected: Husband and Wife Process Parenthoo...
Every Thing Will Be Fine 3D Review