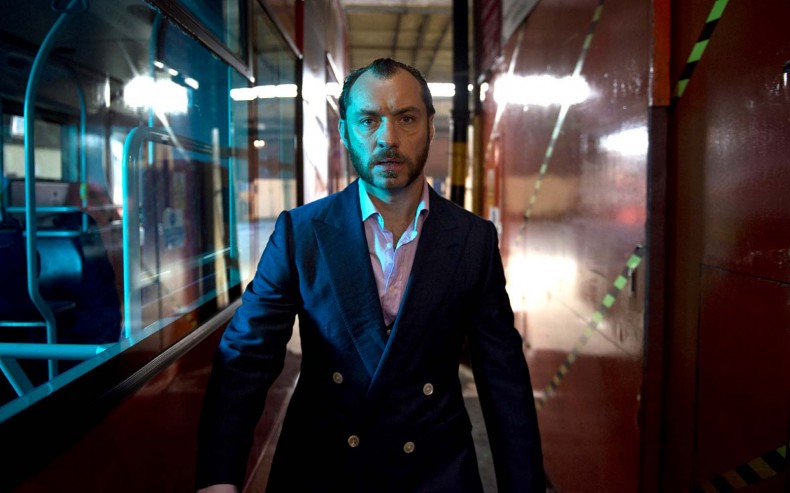 “Dom Hemingway” boasts a delightfully ill-mannered performance from Jude Law, but not much else.

12 years in prison is a long time, but not long enough to rid Dom Hemingway of his gangster strut and explosive temper. Blustering, violent, and impossibly rude, Hemingway (Jude Law) was a legendary safe-cracker that took the fall for a local crime boss (Demian Bichir) and kept his mouth shut for over a decade while his daughter (Emilia Clarke) grew up without him and his wife died of cancer. Set free after his sentence is up, he wants what’s owed to him. But just as soon as he gets his hands on the reparation cash, it’s stolen, leaving Hemingway with no money in a world that’s moved on without him. He remarks “A man with no options suddenly has all the options in the world,” but he’s not even sure what that means.

“Dom Hemingway” cuts into a damn fine trailer, where the stylization looks fresh and Dom’s best insult lines can shine. But given an hour and a half of time to play out, the style proves to be mostly empty, and the diatribe grossly dense and only vaguely relevant. Despite Law’s best efforts (and he truly does transform like never before), the film surrounding him is imploding in a desperate search for depth that will never be delivered on.

Richard Shepard previously directed “The Matador” – a very similar case of a spectacular character at the center of a bad movie. Shepard again insists on penning “Dom Hemingway” himself and overwrites it to hell – devising an unending procession of thicketed, inaccessible dialogue from a character not even remotely interacting with the real world.

The film approaches entertainment every time the pace picks up and Dom is forced to act in the heat of the moment. This hotheaded, stumbling, accidental-genius version of the character is the one that should have dominated the story with off-the-cuff remarks and the simplistic musings of a criminal. In one scene, Dom meets with his old friend and consigliere (Richard E. Grant, who provides some hilarious reaction shots) who is referred to as “Lefty” – prompting Dom to discover (even though they have been hanging out for days) that his friend has had his hand amputated at some point in the last 12 years. “Why do you think I’ve been wearing a bloody glove on one hand?!” asks Lefty, to which Dom cries “I don’t know, thought it was a fashion statement!”

These moments, while few and far between, show there is real potential for this character. But Dom, again and again, is pulled back into more quiet, dramatic scenes where he levels excessively precise verbal attacks at everyone he meets and bizarre, long-winded monologues (the least funny of which opens the film with a minute-long ode to the magnificence of his own penis).

Great music selections composed by Rolfe Kent, including “Fisherman’s Blues” – the film’s wonderful lead single with an indie-Celtic swagger performed by Emilia Clarke – point to a better film that could cash in on the washed-up miscreant set-up and seedy crime atmosphere. But all of the style and colorful lighting doesn’t make up for the textbook character development and unproductive ranting of Law’s actor’s-showcase performance. “Dom Hemingway” is purporting to be a gangster caper with heart but is often nothing more than Guy Ritchie Lite without the content to drive an interesting story.

Taylor is a Chicago-based writer and aspiring film historian. He is the editor here at TFP, and has contributed to a number of international publications such as Cinema Scandinavia, PopMatters, and Room 101 Magazine. He can also be found listening to podcasts, researching topics he has little use for, or running after a city bus.
You might also like
Jude Law

by Taylor Sinople on March 11, 2014
Elaborate, symmetrical shots, pastel colors, and oh my god, the vintage costuming. If this, with a crazy look in your eye, is how you’d eagerly describe a Wes Anderson film to a non-believer (probably while shaking them by the shoulders and begging them to go straight home and watch “Rushmore”), then you’re going to be […]
Comments
Leave a reply
Add Comment Register

END_OF_DOCUMENT_TOKEN_TO_BE_REPLACED
Taylor Sinople Picks: The 16 Best Films of 2016
Form and Function in Alex Ross Perry’s “Queen of Earth&...
Digging for Fire and Unexpected: Husband and Wife Process Parenthoo...
Every Thing Will Be Fine 3D Review