Review: Beyond The Hills 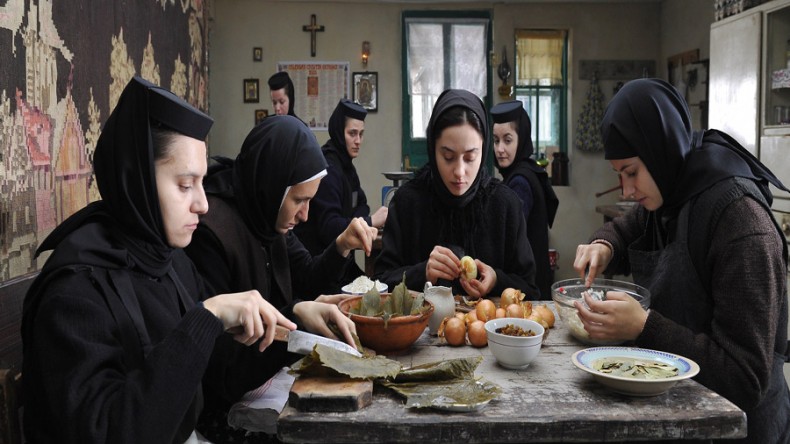 Overall Rating
9.0
9.0
Critic Rating
You have rated this

Alina (Cristina Flutur) reunites with her childhood friend Voichita (Cosmina Stratan), who has since joined a convent in the hills of Romania. While trying to convince Voichita to return to civilization outside of the tight-knit religious community, orthodox traditions spiral out of control when a priest (Valeriu Andriuta) wrongfully interprets Alina’s depressed behavior as something more sinister.

Romanian director Cristian Mungiu found an international audience with his well-awarded 2007 film “4 Months, 3 Weeks and 2 Days,” and has designed “Beyond the Hills” as a spiritual follow-up using similar tones that achieve suspense through cold realism. Deliberately paced and simmering with unsettling horror, “Beyond the Hills” begins as a story about the people of a religious fringe society and ever so slowly evolves into a shocking exorcism. Mungiu’s camera is static and formal, capturing the beautiful production design of the 1800’s-esque monastery in wide frames and long takes.

The story and setting suck you in like a sponge, immersing the viewer in the traditions, practices, and ignorance of the church and its devout followers. The priest (seen as a prophet to the nuns) leads a disturbing assault on Alina after initially seeking to help her peacefully through spiritual treatment. It is an altogether frighteningly believable set-up that explores where faith can tip into dangerous blindness. The few moments in which we are brought back into the modern world that surrounds the religious community possess startling power by awakening us to how deeply we ourselves have sunk into the convent in the hills.

Currently available via Blu-ray/DVD in the U.K. – U.S. release TBA

END_OF_DOCUMENT_TOKEN_TO_BE_REPLACED
Taylor Sinople Picks: The 16 Best Films of 2016
Form and Function in Alex Ross Perry’s “Queen of Earth&...
Digging for Fire and Unexpected: Husband and Wife Process Parenthoo...
Every Thing Will Be Fine 3D Review