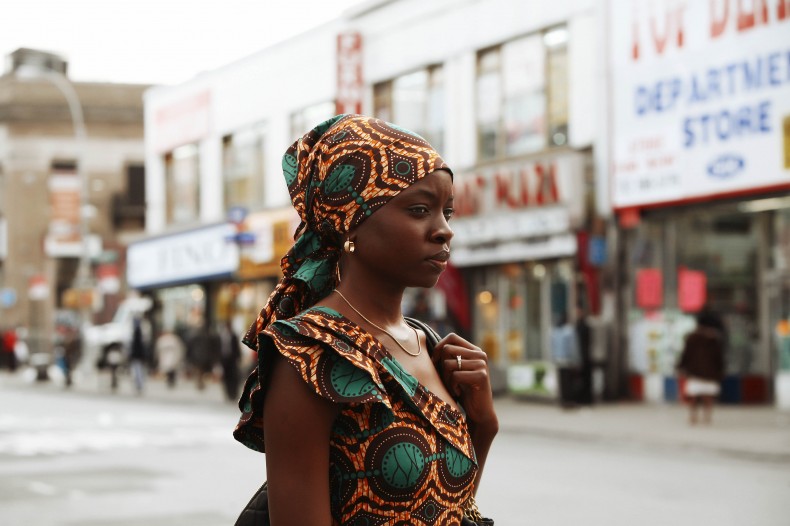 “Mother of George” is a Nigerian film following one couple’s struggle to conceive a child. It’s a simple enough conflict, but running through it is a myriad of smaller and more interesting conflicts. It’s the conflict of reality versus expectation, of a wife versus a mother, and most especially of tradition versus modernity.

The film opens with the wedding of Adenike (Danai Gurira) and Ayodele (Isaach de Bankolé), and from the outset, it becomes clear that whatever else happens over the course of the film, it will at least be a treat to watch. The colours and shots are fabulous, with every shot being a new and unique way of looking at these two people and their lives and emotions. The colours, too, leap off the screen and convey absolutely every emotion felt on the screen.

As the film progresses, this use of colour and of shot angles helps the story move along beautifully. The plot develops at a snail’s pace, but that works. Rather than relying on constant developments in the conflict, there is a recognition that conveying emotion – and especially its protagonists’ frustration – through odd-angled shots and garishly colourful scenes is more effective than speeding along at a breakneck pace. This also means that when the plot finally does speed up, its effect is multiplied. The audience is hurtled along with the characters as the story tumbles out of control, creating a sense of helplessness and empathy.

The most interesting theme, however, is the theme of tradition versus modernity. To fully understand this theme in the film, unfortunately, it’s necessary to have at least some background and understanding of traditional Nigerian culture. Despite being a Nigerian film, though, the filmmakers don’t assume their audience knows everything about Nigerian tradition, and give them a crash course introduction into marital and familial expectations in the wedding scenes. This provides enough of an understanding to get through the rest of the film, though it does mean that certain events seem bizarre or even entirely out of place. The constant emphasis on fertility rites and on the woman as the subject of these rites, however, creates a very firm sense of the conflict and the fact that the conflict rests solely on the wife rather than the husband.

This creates the central conflict of the film. It is the conflict between the wife, Nike, and the mother-in-law, Ma (Bukky Ajayi), each of whom want a child. Nike submits herself to Ma’s rituals and rites, despite the fact that both of them recognise that it is the husband who is the problem. It is when Nike submits completely to tradition and the demands it imposes that troubles truly arise.

“Mother of George” stands in stark criticism of this traditional culture and its insistence that it and it alone provides the answer to the question of how to live. It does so, however, in a loving and gentle way, choosing to show that the culture exists because of love, not out of a desire to ruin lives. It’s a film that acknowledges its own context, but isn’t afraid to criticise that same context.

Ultimately, “Mother of George” is an excellent drama that’s a treat to watch and a treat to immerse oneself in. It conveys emotion beautifully and asks interesting questions about the interactions between tradition and modernity, all alongside a compelling story of one couple’s infertility. It is a well-done film.

END_OF_DOCUMENT_TOKEN_TO_BE_REPLACED
Taylor Sinople Picks: The 16 Best Films of 2016
Form and Function in Alex Ross Perry’s “Queen of Earth&...
Digging for Fire and Unexpected: Husband and Wife Process Parenthoo...
Every Thing Will Be Fine 3D Review