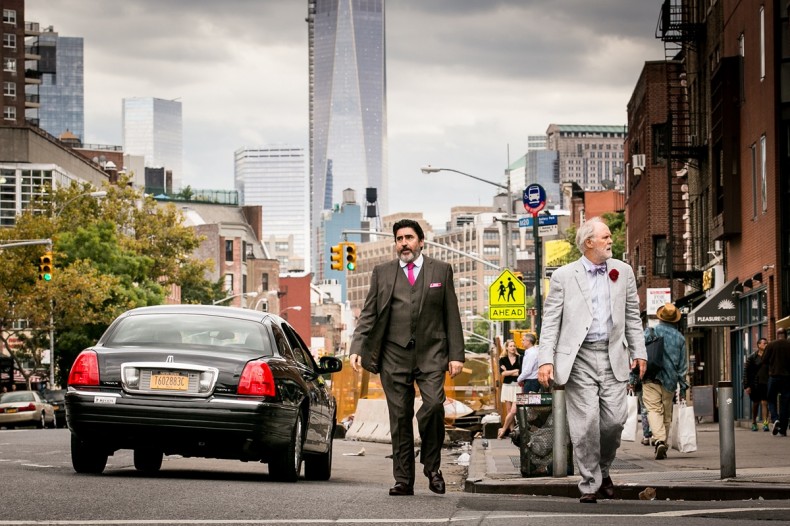 Ira Sachs’ “Love is Strange” moves at a languid pace, but the cast of brilliant performers, and refusal to rely on familiar tropes, completely overshadow most of the film’s structural issues.

In 1937, director Leo McCarey released a film called “The Awful Truth,” a motion picture that brought him to the stage of the Academy Awards, where he accepted his award for best director. While on stage, McCarey said that he was given an award for the wrong film, the correct film being “Make Way For Tomorrow,” which he directed that same year. Released in the same year that Social Security was made available for senior citizens, McCarey’s film depicts a retired couple who must separate after they’re forced to foreclose on their house, bunking separately with two of their grown children, both of whom have established lives.

A similar story is told in Ira Sachs’ new film, “Love is Strange.” After nearly four decades together, George (Alfred Molina) and Ben (John Lithgow) are tying the knot in New York City in response to the legalization of gay marriage. Upon returning from their honeymoon, their lives take an unexpected turn after George is fired from his job teaching music at a co-ed Catholic school, one that has been aware of and supported his relationship with Ben for almost a decade, but cannot do so in the wake of their recent nuptials.

Living on Ben’s pension and George’s private music lessons, the newly married couple is forced to sell their apartment and separate temporarily until they coordinate a new living space. Refusing an offer to stay with their niece in Poughkeepsie, a two hour drive from New York City, George decides to room with the downstairs neighbors, a couple of gay cops (Cheyenne Jackson and Manny Perez) who have an affinity for obnoxiously loud dance music and weekly house parties. Ben, on the other hand, stays with his nephew Elliott (Darren Burrows) and his wife Kate (Marisa Tomei). He’s forced to bunk with their teenage boy Joey (Charlie Tahan), who quickly becomes irritated by his uncle’s presence.

Sachs’ fifth feature film is a beautifully rendered meditation on love that transcends age and time. “Love is Strange” is so strikingly original in both its acknowledgement that the couple’s sexual orientation plays a direct role in their situation, but also that their situation is uniquely human. Sachs realizes that a long-term LGBT relationship can operate very differently than a heterosexual one in some respects, especially in regards to the church and to the law, but doesn’t accentuate these differences as to make them seem alienating or “other” in any way.

Focusing in, as McCarey did, on modern domesticity, Sachs’ film is comprised of the many in-between moments that tend to stick in our memory. Depicting, with an alarming accuracy, the routines of the modern American family, “Love is Strange” allows Sachs to expose the countless domiciliary habits of the multi-generational and multi-orientational bodies that populate New York City. Scored to an assemblage of Chopin, Sachs conducts the film with a languid pace, subtlety, and conservative beauty often similar to the pieces heard in the film, sometimes indulgently so. Filmed with an eye for naturalistic interiors that is at once jarring and oddly comfortable, “Love is Strange” strikes that perfect balance between intimate chamber piece and distinctly American miniature epic.

Unconcerned with conventional structure, Sachs, along with co-writer Mauricio Zacharias, is able to maintain a level of unpredictability without forcefully shoving characters into awkward directions or obviously forced plot points. Although the initial set-up is contrived (has no one in this movie ever heard of an air mattress?), the film’s underlyingly tragic sensibility hits the necessary emotional beats through a seamless blend of flawless performances and some seriously good writing. Though nothing particularly remarkable happens in the film’s 93 minutes, “Love is Strange” is still a remarkable film, one that dares to question our notion of what true love looks like in the 21st century.

Audiences are unlikely to see a story quite like “Love is Strange,” which features whispers of Ozu’s “Tokyo Story” and a clear influence from McCarey’s “Make Way for Tomorrow,” for quite a while. The film, as suggested by the sudden but completely credible resolution, is quintessentially New York, but establishes its timelessness through Sachs’ unique characterizations and universal themes of love, regardless of sexual orientation. When “Love is Strange” enters its final moments, tears are guaranteed to be shed, but they’re tears that have been earned during the 90 minutes that we spend with Sachs and his cast of veteran performers. Alfred Molina has rarely been better, and John Lithgow’s abilities continue to age like a fine wine. Like McCarey’s film, both romances end by bidding farewell at a train station, one with the expectation that their love will never return, the other without a shadow of a doubt that he will be alive and well the next day. Love is, indeed, very strange, but few romances have conveyed that as gracefully as Sachs’ fifth, and best, film to date.

Josef Rodriguez is a writer, filmmaker, and musician living in New York City. He is often labeled as "that guy who didn't love Boyhood" and he finds himself liking Harmony Korine films more than he likes his own friends. When he's not stressing over turning in reviews on time, Josef can be seen playing guitar, watching "Spring Breakers," or trying to write the next great American movie.
You might also like
John Lithgow

by The Focus Pull Staff on November 9, 2014
Editor’s note: As one of the most anticipated releases of the year, “Interstellar” has drawn interest from many of our writers. As such, this article will collect a stream of content on the film – reviews, essays, and other general reactions.  Seen the film? Join in the discussion! Leave a comment and it may get […]
Comments
Leave a reply
Add Comment Register

END_OF_DOCUMENT_TOKEN_TO_BE_REPLACED
Taylor Sinople Picks: The 16 Best Films of 2016
Form and Function in Alex Ross Perry’s “Queen of Earth&...
Digging for Fire and Unexpected: Husband and Wife Process Parenthoo...
Every Thing Will Be Fine 3D Review