Review: Hector and the Search for Happiness 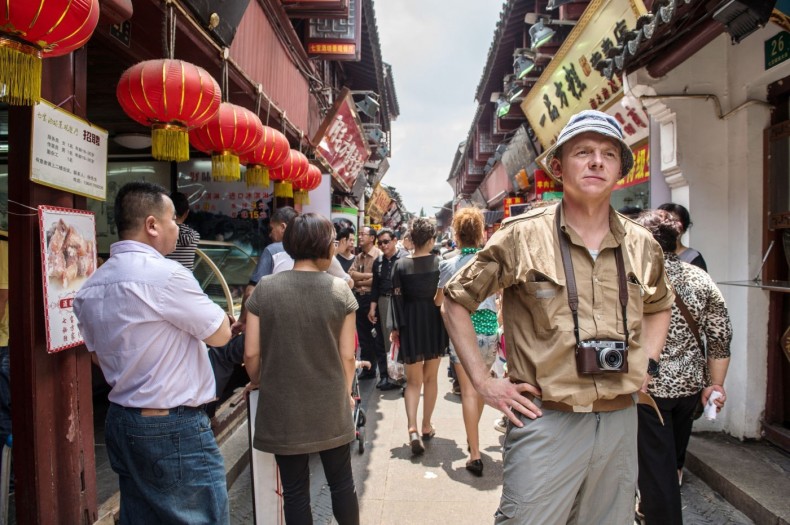 Here’s a solution for those that thought the unfocused, over-romanticized stuff of 2013’s “The Secret Life of Walter Mitty” could have used a blander visual aesthetic.

Between “Hannah Montana: The Movie” and rom-coms “Shall We Dance” and “Serendipity,” director Peter Chelsom has been bringing the schmaltz for years, but rarely with such aggressive condescension as in pseudo-travelogue adventure “Hector and the Search for Happiness.”

The reduction of complexity starts with Hector (Simon Pegg) – a reserved psychiatrist who feels he’s cheating his patients by not understanding the true key to happiness. He dreams of piloting a bi-plane but settles for a hobby flying models. Deciding his internal feelings of dissatisfaction can be solved by an overload of external stimuli, Hector embarks on an international adventure that takes him to faraway lands to discover what makes the people of the world happy.

The very foundation of this story is one built from the outdated notion that psychiatry and therapy are fields designed to allow moody adults to “get happy,” and that happiness itself is a state of existence capable of being achieved by a thorough investigation into the subject.

Chelsom employs nations and their cultures as vague settings for plot – the cinematic equivalence of ushering an “Africa” backdrop on-stage in an elementary school production. In the “China” portion of Hector’s adventure, he meets exactly two people: a wealthy English businessman (Stellan Skarsgård) who takes him to a nightclub, and a local woman (Ming Zhao) who he falls in love with and wakes up to find naked in his bed. Luxurious shots of a nude woman and a few montages of Hector wandering around a single urban street later and we’re off to Tibet to meet monks, and then Africa to meet a warlord. “Hector,” the film, isn’t concerned with these places and their peoples, only what they offer the story – adapted from Francois Lelord’s well-received novel.

Pegg, who has the respect of the comedy community after roles in Edgar Wright’s “Cornetto Trilogy” and J.J. Abrams’s “Star Trek,” proves he can lend a sense of earnestness to even the most fictitious of material, but he spends the majority of his time on-screen wrestling a shape-shifting character. Is Hector the victim of slapstick comedy set to the tune of a jolly piano, or a thoughtful researcher on the path to true discovery, or a bored adult living out a lavish travel fantasy with child-like glee? In truth, Hector is an amalgamation of all of these characters, displaying whatever attribute is necessary for a given scene. It’s one of many sacrifices of character development to the almighty god that is Chelsom’s plot.

Two talented women flank Pegg: his girlfriend Clara (Rosamund Pike) and an old fling that he meets up with during his journey (Toni Collette). Great actors indeed, but together they have the chemistry of a few production assistants pulled on-set to stand in while the camera department checks the framing.

And where Ben Stiller’s “Walter Mitty” shared many of these issues, it at least knocked landscape photography out of the park with stunning compositions and inventive visual effects. “Hector” lacks any distinct style at all, going after the entirely worn out “fairy tale fable” narration in the film’s opening scenes and quickly abandoning it. The visual spectrum on an adventure-travel film like this ranges from the incredible, fluid helicopter work in Peter Jackson’s “Lord of the Rings” series, to the grittier documentary aesthetic of “The Motorcycle Diaries.” The only place you don’t want to be is dead center – a travel adventure without any sense of travel or adventure.

Throughout, Hector is recording his observations on happiness in his notebook, and these notes appear scrawled on-screen – the lone visual quirk the film offers. These notes offer some revelations (“Avoiding unhappiness is not the road to happiness”), but, then again, so does a 99-cent self-help book found on a display rack at a drug store.

Taylor is a Chicago-based writer and aspiring film historian. He is the editor here at TFP, and has contributed to a number of international publications such as Cinema Scandinavia, PopMatters, and Room 101 Magazine. He can also be found listening to podcasts, researching topics he has little use for, or running after a city bus.
You might also like
Rosamund PikeSimon PeggStellan SkarsgårdToni Colette

by Taylor Sinople on July 6, 2014
Too short and only reaching the surface level of its stock characters, "A Long Way Down" is all premise and no follow-through despite the best intentions of the cast.
Comments
Leave a reply
Add Comment Register

END_OF_DOCUMENT_TOKEN_TO_BE_REPLACED
Taylor Sinople Picks: The 16 Best Films of 2016
Form and Function in Alex Ross Perry’s “Queen of Earth&...
Digging for Fire and Unexpected: Husband and Wife Process Parenthoo...
Every Thing Will Be Fine 3D Review