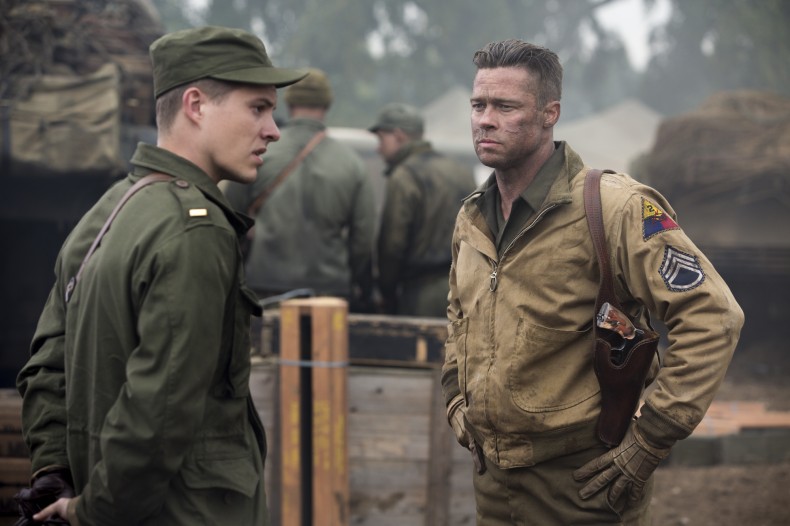 “Fury” is a more than passable World War II film, and it features some of Ayer’s best work both behind the camera and in the script, but its weak characterization and somewhat restrained visual palette keep it from being the great film it so desperately wants to be.

If David Ayer was to be summarized in one word, that word would be “solid.” His script for 2001’s “Training Day” led Denzel Washington to a 2nd Oscar win, and his acclaimed 2012 film “End of Watch,” which he wrote and directed, will undoubtedly go down as one of the great 21st century police procedurals. But, his highest highs as a filmmaker are never balanced by noticeably low lows. Instead, Ayer has made a decent career out of scripting some of the most compulsively watchable LAPD-actioners of the past few years.

So how the hell did he end up writing and directing a World War II film starring Brad Pitt? At first glance, Ayer’s foray into a period piece like “Fury” may seem like something out of left field, but the final product is distinctly a product of Ayer’s work, as evidenced by its episodic nature and deceivingly macho tone. The film depicts a day in the life of five tank soldiers during the final months of World War II. Its leader, WarDaddy (Brad Pitt), has just lost one of his best men in battle, and is given very little time to mourn with his crew – the flamboyantly hispanic Gordo (Michael Pena), the devoutly religious Bible (Shia LaBeouf), and the unabashedly vulgar Coon-Ass (Jon Bernthal) – before they’re stuck with Norman Ellison (Logan Lerman), a pencil-pushing desk jockey who was hastily assigned to the tank hours after their most recent casualty.

Proving almost instantaneously that he has no business being anywhere near a firearm, Norman and the Fury boys are deployed once again to rescue a group of stranded soldiers fighting in a Nazi-occupied battlefield. Throughout the day’s various shootouts, run-ins, and ambushes, Norman is forced to put aside his morals and gun down anything that comes his way at the behest of his harsh new commanding officer. The other men slowly come to appreciate Norman, but as the day comes to a close, Fury and her occupants are faced with a life-altering decision that may or may not end with their demise.

Unlike many recent World War II films, “Fury’s” tone is unflinchingly grim, resembling neither the cartoonish nature of films like “Inglourious Basterds” and “Captain America: The First Avenger,” nor the somber artistry of “Lore” and “The King’s Speech.” Instead, “Fury” plays to writer-director Ayer’s strengths, employing an episodic tone and brutally unflinching brutality that is shot with a gorgeous dignity by DP Roman Vasyanov. An early scene, in which Norman is tasked with cleaning up the remnants of his predecessor’s face off the tank walls, serves as a reminder that what’s to come will not be pleasant or hopeful: it will be devastating, bleak, and raw. And it is.

One of the film’s greatest strengths comes from its refusal to bow to conventional structure, something that Ayer has familiarized himself with as a writer for his entire career. His films always benefit from an unorthodox pacing that often works in his favor, and “Fury” is no exception. Playing like a distant cousin of “End of Watch,” “Fury” has some fantastic actorly moments in it, including an absolutely stunning performance from Shia LaBeouf, even if the characterization leaves something to be desired. The tank’s constant movement from place to place allows the story itself to play loosely, but each encounter reveals something very specific about the characters that ends up paying off wonderfully in the final act.

With that being said, “Fury” only reaches a level of blissful brilliance during its centerpiece sequence, a 20-minute dinner scene in which WarDaddy and Norman find two German women hiding in their 2nd-floor apartment, terrified of the drunk and horny American soldiers that have occupied their town below. Ayer writes and directs this scene beautifully, with a natural ear for dialogue and a subtle build-up of tension that rivals the opening sequence of Tarantino’s “Basterds,” and ranks among the best work he’s ever done. Pitt and Lerman are both fantastic, and relative newcomer Alicia von Rittberg holds her own as a young German girl who falls instantly in love with Norman, who reveals himself to be quite the scholar after sight-reading a traditional German piece on the family’s piano.

What makes “Fury” an interesting film to watch isn’t a sweeping narrative or any particular grandiose statements about the nature of humanity. Instead, the film’s triumphs are small ones, like Jason Isaacs’ spectacular cameo as a commanding officer in need of Fury’s assistance or certain cinematographic flourishes that really set a unique tone. However, there just aren’t enough of these moments to amount to a great moment, only flashes of momentary inspiration amidst what is otherwise pretty standard stuff. It’s not bad by any means, but it’s not particularly great either, and with a cast, crew, and subject of this magnitude, it should have been.

Josef Rodriguez is a writer, filmmaker, and musician living in New York City. He is often labeled as "that guy who didn't love Boyhood" and he finds himself liking Harmony Korine films more than he likes his own friends. When he's not stressing over turning in reviews on time, Josef can be seen playing guitar, watching "Spring Breakers," or trying to write the next great American movie.
You might also like
brad pittJim ParrackJon BernthalLogan Lerman

by Taylor Sinople on June 7, 2013
At some point during the globe-traversing, exceedingly implausible plot of “World War Z” that finds UN employee Gerry Lane (Brad Pitt) – the world’s luckiest guy – avoiding death at every turn and stumbling across a series of clues that lead him towards single-handedly saving the human race from annihilation by zombie apocalypse I had […]
Comments
Leave a reply
Add Comment Register

END_OF_DOCUMENT_TOKEN_TO_BE_REPLACED
Taylor Sinople Picks: The 16 Best Films of 2016
Form and Function in Alex Ross Perry’s “Queen of Earth&...
Digging for Fire and Unexpected: Husband and Wife Process Parenthoo...
Every Thing Will Be Fine 3D Review