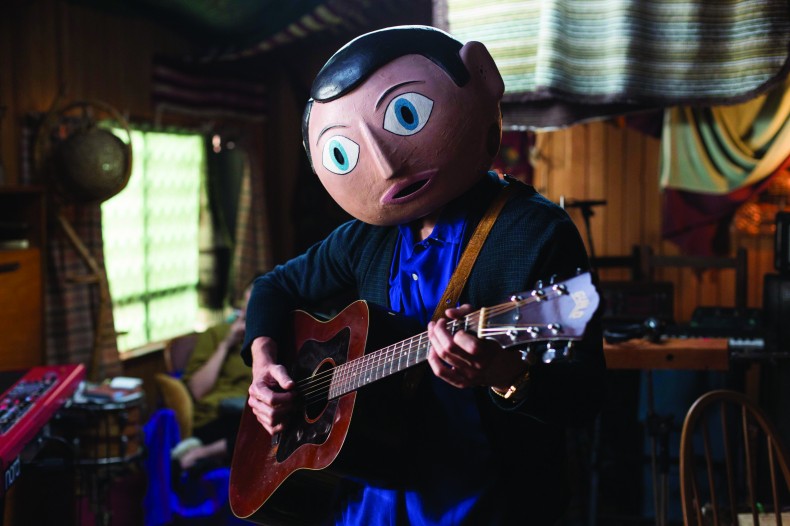 Darkly funny, witty, refreshingly original and boasting one of Michael Fassbender's most towering performances to date, "Frank" has just about all you need in a film.

After the first images of Michael Fassbender wearing a Frank Sidebottom mask began to surface, everyone seemed to think Lenny Abrahamson’s “Frank” would be a Chris Sievey biopic. During the late 80’s and early 90’s, the late Sievey (who originally led a punk rock band named The Freshies) used to host television programs and play music whilst wearing a giant cartoon mask – much like the one we see in this film. Now whilst some of Sievey’s antics may have inspired Lenny Abrahamson’s film, for the most part it appears to be unrelated to his life, aside from the iconic papier-mâché head that takes center stage here. An interesting role choice for Fassbender – after his consistent stream of raw performances, he decides to take a dive and cover himself up. Is this the actor testing new, niche waters?

“Frank” is an especially sharp and witty satire of what the music business has morphed into since social media began to play such a major role in dictating the success of a performer. To call the music Frank makes with his band “Soronprfbs” indecipherable and new age just about sums it up. The music is almost non-existent, hardly worthy of the title ‘music.’ Rather, the band is like a piece of avant garde performance art, saved from being labeled pretentious by the fact that the band leader is certifiably insane. However, insanity has always been a marketable asset, and that’s what the film spends a lot of the time exploring.

The protagonist throughout isn’t Frank, but instead the ambitious keyboarder Jon (Domhnall Gleeson) who fills in during a spontaneous gig and soon finds himself apart of the band. Unbeknownst to the other members, Jon begins filming their antics and rehearsal sessions, during an endless period of recording a new album. Uploading videos to YouTube, or posting on Twitter, Jon slowly gives them a following before they’ve even recorded or released a note. Meanwhile, Clara (Maggie Gyllenhaal) the band’s theremin player as well as Frank’s confidant, pushes the band in the other direction, with her constantly fighting against even the vaguest idea of success – ultimately distrusting Jon’s ambition, and jealous at the prospect of having to share Frank with anybody else.

In the titular role, Michael Fassbender is terrific, despite the fact that his head is always obscured. Frank is like a more innocent, musical version of Tyler Durden, leading his not-so-merry band astray with his ambitious art, which is so taxing that his last keyboardist committed suicide. The film starts off as a wry-eyed, witty satire on the lure of fame, with Jon seduced by Soronprfbs and their bizarre leader; eager to please despite his obvious creative shortcomings. For half of the film, Frank acts as a know-it-all guru, only to shift demeanor and become vulnerable as the film changes pace in the second half, in which the band finds itself invited to South by Southwest festival after the YouTube videos become a viral sensation. Jon, as the innocent with an agenda, strikes a nice balance between wide-eyed naivety and ambition. Scoot McNairy also gives a strong performance as one of the more devoted members of Frank’s entourage, and the band’s default manager. However it is at this juncture that Abrahamson noticeably changes tack, diluting the film into a more formulaic, and sadly less interesting, morality tale about selling out and forgetting your roots.

The last thirty minutes or so sees our broken, emotionally drained keyboardist unearthing the source of both Frank’s ingenuity and mood-killing despair, with the volatile Fassbender revealed at last to his expectant audience. Such a grand climax should be the peak of the film given the teasing that had come before, but there is a sense that Abrahamson reduced his out-there British dramedy into an ‘issue film’ with a social conscience. This is somewhat disappointing given the subtlety of Abrahamson’s past endeavors, and perhaps a sign that it is the filmmakers, rather than Frank and his posse, that have compromised their original creative vision in the hunt for mainstream acceptance.

This film is difficult to classify. It’s darkly humorous, but at the same time it’s filled with a surprising amount of drama, especially in the final act, where the question of Frank’s sanity becomes the central theme. It also tries to say something about the current state of the music business, where bands can become sensations without ever having to prove themselves, just because they are a gimmick. At a relatively brisk ninety-five minutes, Abrahamson’s film covers a lot of territory without feeling rushed, over-saturated, or abrupt.

“Frank” is perhaps a little too bizarre to ever really connect with a mainstream audience, but certainly has a lot of cult potential. Indie music fans, and lovers of strange cinema should be quick to embrace it in all its quirky glory. It manages to be both a clever satire, and unexpectedly moving towards the end, with the film’s faults being few and far between.

Jess is a 21 year old university student studying English Literature. Born and raised in England, she's an aspiring writer and film lover, with a strong affinity for cats.
You might also like
Domhnall GleesonFrankmaggie gyllenhaalMichael Fassbender

END_OF_DOCUMENT_TOKEN_TO_BE_REPLACED
Taylor Sinople Picks: The 16 Best Films of 2016
Form and Function in Alex Ross Perry’s “Queen of Earth&...
Digging for Fire and Unexpected: Husband and Wife Process Parenthoo...
Every Thing Will Be Fine 3D Review