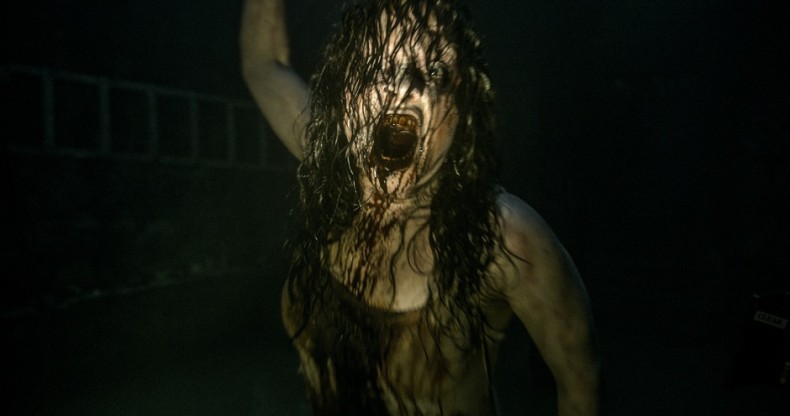 What’s the golden rule of remaking a classic? Don’t waste my time! We’ve reached an age in cinema where the widely known film school fact “there’s no new stories” has evolved in meaning from recycled themes to literal, scene-by-scene remakes. While remakes can certainly illicit a groan of “do we really need another?”, they can also allow a breath of fresh air to a well-made, but dated original. Luckily, Fede Alvarez’s gruesome, over-the-top remake doesn’t just refresh Sam Raimi’s 1981 Evil Dead – it refreshes a genre.

Warning, this trailer is suitable for mature audiences only.

After a short prologue that ends in the ever-satisfying smash-cut-to-opening-title gag, Alvarez’s take on the opening of the Evil Dead saga begins at horror movie square one: five college-aged friends retreat to a remote cabin in the woods. The first note of adaptation comes with the realization that the kids aren’t here to party. Instead, the friends have come to help the self-destructive Mia (Jane Levy) quit her heroin addiction “cold-turkey”. This clever set-up positions Mia as a weak-minded character put in a situation where she will be going through manic withdrawals. Faithful to the original, the friends uncover an evil book bound in human skin in the basement of the cabin. A few passages from the book read out loud later and a demon has been unknowingly summoned to promptly consume the souls of the five friends, then take on all of humanity. Now, the demonic possession of Mia is initially taken as episodes of withdrawal by her loving friends. This alteration to the plot plainly tells the audience to throw out expectations of a shot-for-shot remake and strap in for an updated version of the cult hit. Don’t worry, though, all the infamous scenes from the original survive the re-make treatment even though most of the campy-ness is thrown out the window.

The plot hits a lull in the third act that is gratefully reversed with a colossal finale. While the horror is undoubtedly successful, the film is in desperate need of more humor. It has become a corner stone of the horror flick to include competent comic relief and, in this respect, Evil Dead drops the ball. The punch lines are written in, but none hit particularly hard in a film that will have audiences latching on to moments of safe haven whenever possible. In all, however, the set pieces throughout are all unique and thrilling, and fans of the genre will take delight in following the characters into one dreadful scenario after another.

So, perhaps the most important question regarding a horror movie is: is it scary? Evil Dead is very scary. The poster proclaims it to be “The Most Terrifying Film You Will Ever Experience”, and this isn’t too far off. This success is due largely to the film’s energizing attention to technique. Pop-out, loud-noise scares are aplenty, but all feel original, never cheap. Beyond this, psychological horror and plain-old creepy imagery bring the true triumphs.  Cinematographer Aaron Morton uses the camera to tell the story in thrilling and surprising ways. In one memorable sequence that had the entire theater applauding in anticipation, the camera booms up from a character trapped in a shed to reveal a glistening chainsaw. Moments like these are abundant in Evil Dead, and it really is exciting to watch a film that’s aware of its audience so acutely. More than anything else, it is clear Alvarez is out to entertain. The horror never feels “dirty” in the vein of countless recent attempts at the genre; instead, everything in the film is passed through a filter of  “don’t go in there!” dreadful fun that horror fans will be grinning ear to ear about.

Taylor is a Chicago-based writer and aspiring film historian. He is the editor here at TFP, and has contributed to a number of international publications such as Cinema Scandinavia, PopMatters, and Room 101 Magazine. He can also be found listening to podcasts, researching topics he has little use for, or running after a city bus.
You might also like
horrorjane levyreview

by Jordan Brooks on October 18, 2014
One of the first horror films ever made, “Nosferatu” is bolstered by F.W. Murnau's talent, and earns my distinction as the first truly-scary movie ever made.
comments
Leave a reply
Add Comment Register

END_OF_DOCUMENT_TOKEN_TO_BE_REPLACED
Taylor Sinople Picks: The 16 Best Films of 2016
Form and Function in Alex Ross Perry’s “Queen of Earth&...
Digging for Fire and Unexpected: Husband and Wife Process Parenthoo...
Every Thing Will Be Fine 3D Review