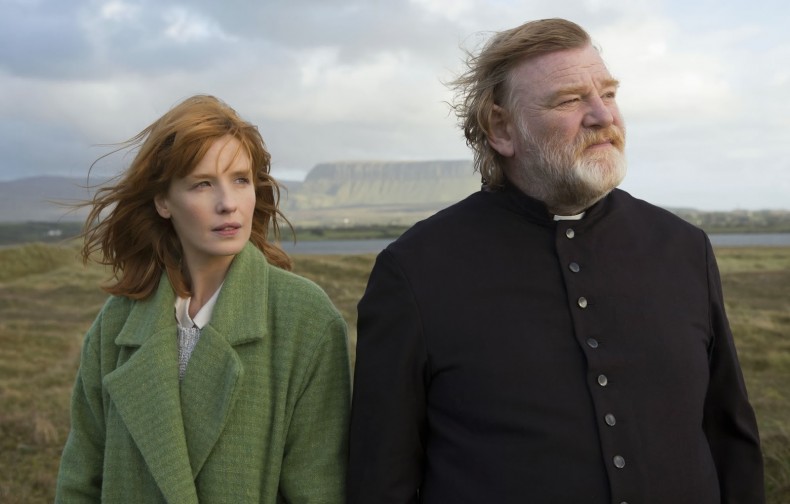 On the Clark St. bus in Chicago I overheard a (I assume, quite religious) woman telling her friend, “You should have to undergo psychological evaluation if you want to see something like that!” She was talking about “Calvary,” John Michael McDonagh’s black comedy that explores how much wickedness a good priest can endure. She was also probably misinterpreting McDonagh’s film, as this is a story dissecting morality, not religion.

As the patriarchal presence and spiritual cypher to a small, coastal town in Ireland, Father James (Brendan Gleeson) selflessly dedicates his life to the problems of others. He’s the last guy someone should want to kill, but, in a confessional, an unseen man threatens to do just that.

The man confesses he was a victim of clergy abuse as a child, and has decided to take vengeance on Father James despite his innocence. He’s given a week’s time. Being that he’s an integral part of such a close-knit town, James seems to know who the man is, but he doesn’t share this information with anyone else (or us).

What’s so interesting about “Calvary” is that its trailer doesn’t do much to promote its most unique feature – the structure. The murder mystery established at the opening and resolved at the close takes up around ten minutes at either end. The bulk of the film, then, is given to a series of delightfully pitch black vignettes in which Father James meets with the various townspeople who seem to have become used to sharing their most personal pitfalls and destructive thoughts with him.

Each of these one-off scenes brings in a new character. A wealthy financier, abandoned by his wife and children, observes a rare painting hanging on his wall: “Everything has to mean something, otherwise what’s the point? Anyways, I don’t have to know what it means, I own it, that’s all that matters.” A handsome and helplessly shy twenty-something is stuck between committing suicide and joining the Army (a job he feels may benefit from his violent urges).

The question of who is planning on murdering Father James weighs over all of these scenes, even if that particular plotline isn’t directly advanced until the very end. These fairly simple black comedy scenes are elevated in importance with the additional stakes the murder-mystery gives the film. McDonagh’s blend of gallows humor and genuine drama works in direct homage to his brother Martin’s best film, “In Bruges.”

“Calvary” opens with a two-minute reaction shot that confirms from the very start: this is Brendan Gleeson’s film. A few leading and supporting roles deep into the year already, Gleeson is quickly becoming a sought-after presence in movies that require dense, high-intensity characters. “Calvary” is, by design, a film featuring a procession of single-beat, on-the-nose characters. The supporting roles all add to a cumulative sense that this particular town must be a halfway point between Earth and hell. At the center of those inventive but simple characters is Father James, who is left with all of the complexity to himself. McDonagh pushes it a little far with the saintliness of James, taking an entire act to introduce hints of his past that suggest he’s still human despite his overwhelming goodness.

From there, Gleeson performs the hell out of the character – a man who’s finding his moral code isn’t just outdated, it’s all but extinct. Gleeson does little full-body acting, but performs at an impressive level with his eyes alone.

If there’s a bone to pick with “Calvary,” it’s probably got to do with the presentation. The tone of McDonagh’s screenplay seems to be a no-brainer for a high-style visual approach by way of an Irvine Welsh adaptation, but cinematographer Larry Smith’s work here is fairly traditional in technique. Like Smith’s photography in 2013’s “Only God Forgives,” he excels at capturing scenes lit by mixed sources and various color temperatures. The stained glass of the windows of Father James’ church are played to great effect. And as for the exteriors, well, you could likely point a camera in any which way on the shores of Ireland and end up with a stunning image, but the helicopter work here is particularly beautiful. Again, though, save for a few jump cuts to raw, freshly butchered meat, the largely traditional dramatic approach to the presentation may prohibit some viewers from picking up on how much fun the filmmakers are having with this story.

“Calvary” is a few adjustment clicks away from being award season ready, but those adjustments aren’t ones that would improve the film. It’s not politically correct, or Christian-lady-on-the-bus-approved, but “Calvary” is nonetheless a wonderfully enjoyable black comedy that’s well executed on nearly every level. And although it has more to do with morality than religion, don’t forget the historical weight of its title (you didn’t think it was called “Cavalry,” did you?)

Taylor is a Chicago-based writer and aspiring film historian. He is the editor here at TFP, and has contributed to a number of international publications such as Cinema Scandinavia, PopMatters, and Room 101 Magazine. He can also be found listening to podcasts, researching topics he has little use for, or running after a city bus.
You might also like
Brendan GleesonCalvaryChris O’DowdDomhnall Gleeson

by Zack Miller on June 2, 2014
Even if you’ve never been to the east coast of Canada, you’re bound to find something to enjoy in the dose of rural amusement served up by “The Grand Seduction."

by Taylor Sinople on June 1, 2014
Doug Liman directs Tom Cruise in “Edge of Tomorrow” – a first-rate action sci-fi blowout that’s as fun-spirited as a summer blockbuster should be and smarter than most to boot.
Comments
Leave a reply
Add Comment Register

END_OF_DOCUMENT_TOKEN_TO_BE_REPLACED
Taylor Sinople Picks: The 16 Best Films of 2016
Form and Function in Alex Ross Perry’s “Queen of Earth&...
Digging for Fire and Unexpected: Husband and Wife Process Parenthoo...
Every Thing Will Be Fine 3D Review