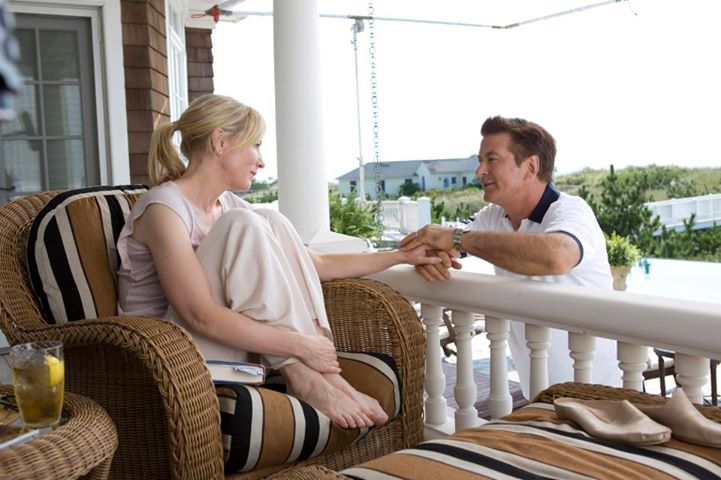 At the root of it all, Woody Allen has always been making movies about beautiful cities and the people that live in them. “Blue Jasmine” is in many ways a return to form, but it comes with some unexpected red tape.

Riffing on “A Streetcar Named Desire,” Jasmine (Cate Blanchett) and her wealthy husband Hal (Alec Baldwin) are living the life of affluence and luxury in New York City when Hal is suddenly indicted for financial fraud and sent to prison. Stripped of all monetary wealth and property, the lifestyle-obsessed Jasmine has a mental breakdown in the street and decides to travel to San Francisco to live with her sister, Ginger (Sally Hawkins).

Jasmine has no choice but to face head-on the struggle of being knocked down the social class staircase. As she searches for a job and begins her new life, a powerful greed and desire for status further worsens her mental health in a series of nervous breakdowns.

“Blue Jasmine” is actually structurally similar to “Annie Hall” – a relationship is over, here’s why. The story is told through a series of flashbacks that reveal new information about Jasmine and Hal’s less-than-perfect relationship. These flashbacks are triggered by memories that Jasmine frequently becomes lost in.

My initial concern stems from being asked to digest a character study on an unlikeable character. Fortunately, Cate Blanchett turns in a memorable and committed performance as the manic, self-involved Jasmine. Blanchett is irritating in all the right ways, and lays down more than one outstanding monologue as she is struggling with these nervous breakdowns. She often finds herself oblivious to her own rambling – lost in memories and speaking out loud with great intellect regardless of whether anyone is listening or not. Blanchett shows impressive talent and presence. She holds some of the most intense close-ups of the year.

Supporting Blanchett is a fantastic ensemble of supporting players, each casted and implemented aptly. Sally Hawkins plays Jasmine’s lower-middle class sister to great success as the most human character in the film. She’s flawed in believable ways, content with her life working in a grocery store and believing she doesn’t deserve much more. Hawkins hits some great notes and is a vital, grounding source to Blanchett’s chaotic Jasmine.

Yanked out of obscurity to play Hawkin’s ex-husband is Andrew Dice Clay in his first on-screen role in twelve years. Clay is a huge surprise, showing exciting dramatic potential. He is a gruff, impolite, “loser”-ish type who harbors a great resentment for Jasmine and Hal after he invests $200,000 of lottery winnings with Hal and it is all lost. Other welcome, albeit brief additions are Louis C.K. (a perfect match for a Woody Allen character in the future) playing a man Ginger has an affair with, and Bobby Cannavale (doing Brando) as Chili – Ginger’s greaseball boyfriend with his heart on his sleeve. These performances make “Blue Jasmine” everything that it is, but the production of the film is working against the grain to muddle the acting power.

The trouble is that there is a serious lack of cooperation between the comedy and the tragedy. While all of Allen’s best films include both moments of witty comedy and philosophical melancholy, “Blue Jasmine” doesn’t know when to play which card. The editing seems to be the main culprit for this disconnect. As we frequently crosscut between past and present, it becomes exhausting to be so consistently on edge – anticipating whether you are supposed to prepare for jokes or poignancy. The audience in my screening occasionally got tripped up – laughing at moments that aren’t meant to be funny due to the out-of-sync tone.

Adding to the lack of cohesion is a seriously repetitive screenplay that has characters carrying out the same conversations over and over, and Woody Allen’s iconic, light jazz music. In this case, the music is a total distractor from the overall tone of the movie. It’s out of place, and feels put in out of necessity – chasing the success of better Allen pictures.

The result of all of this disassociation is a film that takes much more effort than it should to enjoy. This isn’t the flowing rhythm of “Annie Hall” or the sharp back-and-forth of “Crimes and Misdemeanors,” but a tiresome, randomized tempo. It would be better absorbed during a second viewing, but it’s a viewing that I’m not very inclined to actually make.

There’s enough here to please Allen fans, but there lacks the singular vision found in his best films as recent as “Midnight in Paris.” Woody has always worked with two hands – one of comedy, the other sorrow. Despite a powerhouse performance from Cate Blanchett, he isn’t quite ambidextrous enough here to pull it all off.

Taylor is a Chicago-based writer and aspiring film historian. He is the editor here at TFP, and has contributed to a number of international publications such as Cinema Scandinavia, PopMatters, and Room 101 Magazine. He can also be found listening to podcasts, researching topics he has little use for, or running after a city bus.
You might also like
Alec BaldwinBobby CannavalePeter SarsgaardSally Hawkins

by Zack Miller on December 8, 2014
“Still Alice” is more adequate than excellent, but offers a star performance from Julianne Moore that is decidedly the latter.
comments
Leave a reply
Add Comment Register

END_OF_DOCUMENT_TOKEN_TO_BE_REPLACED
Taylor Sinople Picks: The 16 Best Films of 2016
Form and Function in Alex Ross Perry’s “Queen of Earth&...
Digging for Fire and Unexpected: Husband and Wife Process Parenthoo...
Every Thing Will Be Fine 3D Review