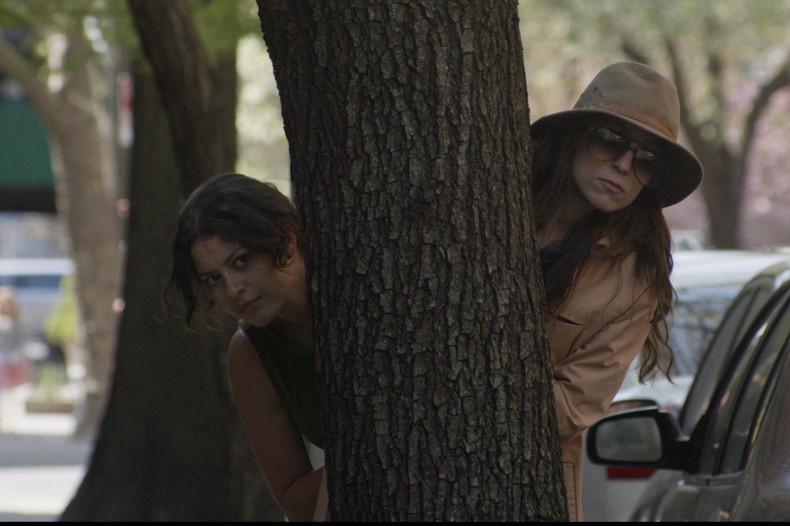 Wild Canaries is as adorable as it is honest, with a unique look at the parallels between crime and love, functioning as both a well-developed romantic drama and a creative throwback to 1930s caper comedies.

This week’s release of Focus is a reminder that love and crime are the two elements of any successful movie as long as they’re also cool as hell. Audiences like their robberies to be slick and their romance to be grand. They love when their characters fight and kill and steal for the person they love, only to be rewarded in the end with the thing they’ve been looking for the entire time. On the opposite end of the spectrum, Lawrence Michael Levine’s Wild Canaries reminds us that crime and love are neither of those things. In fact, they’re both quite messy affairs, indeed.

Engaged to the young and doe-eyed Barri (Sophia Takal), Noah (Lawrence Michael Levine) – who runs a business with his ex-girlfriend-turned-lesbian Eleanor (Annie Parisse) – is feeling unsatisfied with his life. Harboring some serious doubts about the strength of his relationship with Barri, Noah suspects infidelity between her and their lesbian neighbor Jean (Alia Shawkat), while Noah himself still pines for Eleanor. This convoluted love square is all fun and games until Noah and Barri’s downstairs neighbor, Sylvia (Marylouise Burke) drops dead of a heart attack at 84.

Noah is resolute with the knowledge that her old age was probably the contributing factor to her sudden departure, but Barri is convinced that Sylvia was murdered in order to cure someone’s financial woes. Barri and Jean follow the primary suspect, Sylvia’s son Anthony (Kevin Corrigan), going so far as to break into the man’s house for evidence. But when word gets out that their landlord, Damien (Jason Ritter), is looking to sell their building and get out of Dodge, Barri becomes determined to figure out the truth no matter what stands in her way.

Set in the Brooklyn that’s been exploited by Lena Dunham and Jonathan Ames, among others, Lawrence Michael Levine’s Wild Canaries takes a decidedly different approach, tackling the material with more slapstick and more violence than what’s normally seen in these low budget comedies. Both Takal and Levine, a real-life couple, are fantastic as a pair of Brooklyn lovers in the midst of a rough patch that may actually end their lives. Takal, in particular, displays her surprising range, with an ability to change gears from the innocent to the perceptive to the business savvy to the angry at the drop of a hat. As the lesbian roommate, Alia Shawkat plays off of Takal extremely well, and their chemistry as both friends and possible lovers never veers into anything either too corny or self-serious.

Jason Ritter, who’s been turning in a stream of solid performances since last year’s About Alex, is becoming one hell of an actor, tackling a role unlike any he’s done prior, but commanding it with a three-dimensionality that completely illustrates what Wild Canaries is all about. Amidst the comedy, the cartoonish violence, and the romantic woes, Levine is making a comment on the nature of relationships and crime, the connectivity between the two, and how both are portrayed disingenuously in the movies.

By employing the tone of a 1930s caper comedy, Levine points out the lunacy that is present in both crime and long-term relationships, making a point to accentuate the idea that neither is as slick or cool or grandiose as they’re seen week after week at the local cinema. He essentially admits that, yeah, there are no clean getaways, there are no clean crimes, and it is often an act of passion, love, or desperation, but not in the way we’re accustomed to seeing it thanks to Danny Ocean.

Often, we don’t commit crime to get something, we commit it to keep something. Having that mentality throughout the picture greatly improves Levine’s handling of the tone, which has the potential to go totally off the walls but manages, somehow, to stay consistent throughout all the developments, both narratively and in relation to the characters, that this film throws at its viewers. If there’s one complaint to be had, it’s that sometimes the film moves too quickly, with a constant freneticism that undermines the more character-centric moments.

But that’s still only a minor complaint in an otherwise hugely entertaining and compulsively watchable film, one that can be enjoyed time and time again for its excellent sight gags, hilarious one-liners, and engaging performances by Takal, Ritter, and the entire cast. Levine always writes with a sincerity that ends up strengthening the film’s more self-aware moments, especially when the ending nearly jumps the shark with a strong case of over-explanation. Yet, Wild Canaries is a film that works because it functions, first and foremost, as just a fun piece of filmmaking. Much like the comedies that inspired it, the object is to entertain, but with intelligence and wit, not shock and stupidity.

Josef Rodriguez is a writer, filmmaker, and musician living in New York City. He is often labeled as "that guy who didn't love Boyhood" and he finds himself liking Harmony Korine films more than he likes his own friends. When he's not stressing over turning in reviews on time, Josef can be seen playing guitar, watching "Spring Breakers," or trying to write the next great American movie.
You might also like
Jason Ritter

END_OF_DOCUMENT_TOKEN_TO_BE_REPLACED
Taylor Sinople Picks: The 16 Best Films of 2016
Form and Function in Alex Ross Perry’s “Queen of Earth&...
Digging for Fire and Unexpected: Husband and Wife Process Parenthoo...
Every Thing Will Be Fine 3D Review