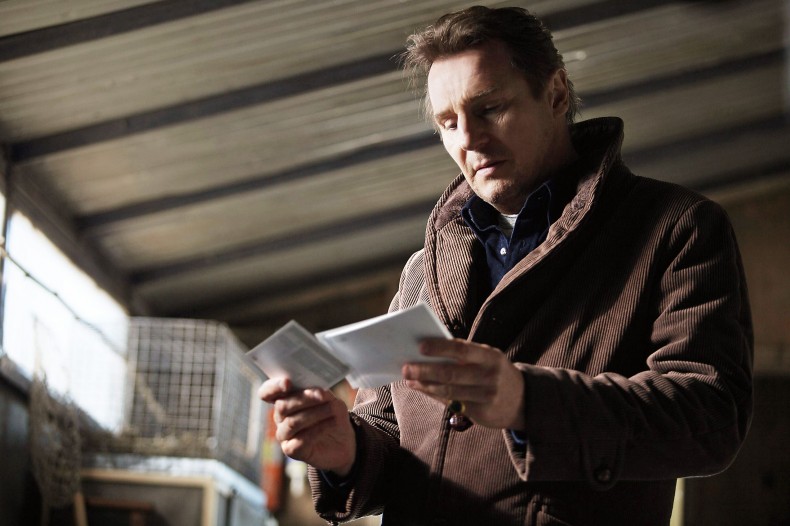 “A Walk Among the Tombstones” is a throwback to hardboiled detective stories of yore that does nothing but a disservice to those stories with bottom-of-the-barrel cliches, lazy storytelling, and unfocused direction.

“A Walk Among the Tombstones” is, much like its title, attention-getting and stylish on the surface, but ultimately devoid of any real meaning or substance. This adaptation of Lawrence Block’s eponymous novel is, at times, shockingly grim, but inconsequential in its lurid violence and sexuality.

Matthew Scudder, retired cop, private-eye-for-hire, and long-time Alcoholic’s Anonymous chip-holder, is a Sam Spade/Philip Marlowe-type (a point that is hammered in time and time again with what is perhaps the world’s dullest nail) who spends his days skulking around a pre-9/11 New York City. Scudder is played with frustratingly generic stoicism and world-weariness by Liam Neeson (“Schindler’s List,” “Taken”), who seems content to play every one of his roles the same these days. Neeson’s native, hoarse Irish brogue is replaced with a comically stereotypical and unstable Bronx drawl and his tall frame is draped in a long, Charles Bronson-esque coat. After a brief, but explosive introduction to Scudder and a decidedly haunting opening credits sequence, we find Scudder, 8 years after the introductory scene, in a diner. His stoic do-goodery is heavily showcased when a young drug kingpin (Dan Stevens, known for roles in “Downton Abbey” and “The Fifth Estate”) hires Scudder to find the two men who kidnapped, tortured, and killed his wife. Scudder hems and haws with the morality of the situation, but takes the job nonetheless. What follows in the final two thirds of the film feels less like a throwback to Dashiell Hammett and Raymond Chandler and more like amateur hour at the local mystery dinner theater.

Director Scott Frank, who also wrote the screenplay, cultivates a clear, defined visual style that is in direct odds with the rest of this film. Director of photography Mihai Malaimare Jr. (likely known best for his work on Paul Thomas Anderson’s “The Master” and a handful of Francis Ford Coppola films) does a fair job of keeping the cinematography energetic and engaging. A good portion of the film is shot in typical noir-esque low-light and it feels appropriately shadowy. There are a handful of scenes that stand out from the rest of the film almost entirely due to the visuals, and while impressive on the part of Malaimare, they can feel a little jarring and over-compensational. Frank, known best for his only other directorial effort “The Lookout” and for his screenwriting credits on “Minority Report,” “Out of Sight,” and “Get Shorty,” captures a small handful of moments in “A Walk Among the Tombstones” with an energy and capability unmatched by broad sections of cliched, exposition-laden dialog and lazy storytelling.

Frank begins the film with a sharp, stylish gunfight sequence that confidently draws the audience in, only to lose them by dropping the energy and the pace. The first third of the film is rocky, but the final two are rockier yet. Scudder, who is given little in the way of character development aside from an AA chip, goes through the motions of any crime procedural—interviewing locals, scrolling through micro-film in a public library, visiting former crime scenes. It’s all so bafflingly pointless and boring that we’re left wondering exactly why we’re supposed to be invested in anything or anyone. Frank’s lackluster script drains any sense of tension or suspense from the film, instead delivering scene after scene of talking heads outlining each detail of the plot. It’s the easiest mistake to make when adapting a written work to screen and I wouldn’t be surprised if lines of dialog from the film were lifted directly from Blocks novel. Frank’s intentions with the story are muddled and unclear, which is further hampered by unfocused, meandering direction and awkward editing.

Pacing and dialog problems aside, there still remains one significant issue: the cliches. Oh, the cliches! It’s truly astounding how contrived “A Walk Among the Tombstones” ends up, which leaves the strong visual sensibility and decent casting feeling like squandered potential. Neeson’s Scudder is, as previously mentioned, a Hollywood stereotype of a hardboiled detective—no-nonsense, hard-nosed, and more than a little weary. The bad guys in the film are, well, really bad. Frank creates a predominantly black and white world in which the bad guys are irredeemable sexual perverts and murderers, while the good guys are unfortunate victims of circumstance. The two antagonists are painfully underdeveloped as well. David Harbour (“Quantum of Solace,” “End of Watch”) and Adam David Thompson (‘Martha Marcy May Marlene”) are menacing as the kidnapping serial killers, but their motives are hardly explored for all of the screen-time spent relishing their actions. Potentially the most egregious cliche, however, is the introduction of a young, street-smart, urban boy (relative newcomer Brian “Astro” Bradley) as Scudder’s unofficial partner, TJ. The characterization of TJ is better suited for the sappiest Lifetime movie, as he is a homeless sickle cell virus victim with an artistic streak and a misguided sense of how the world works. There’s an  entire subplot of Scudder taking young TJ under his wing which serves as an unnecessary and out-of-place detour in such a grim, self-serious, and grotesque story.

“A Walk Among the Tombstones” is a visually interesting, but incredibly clumsy film that stands as a great example of wasted talent on both sides of the camera. The intent to emulate films like “The Maltese Falcon” or “The Big Heat” seems clear, but “A Walk Among the Tombstones” falls short with its bloated script, unclear focus regarding theme and tone, and confused direction. It’s unfortunate that Scott Frank’s sophomore effort is so undercooked, as he’s proved himself capable with 2007’s “The Lookout”, and, hopefully, he has a chance to redeem his portfolio in the future.

Jakob is a full-time student, full-time aspiring filmmaker, and part-time contributing member of society currently residing in the barren wasteland known as "Central Pennsylvania." On most days, you can find him hunched over a laptop—surrounded by a horde of cats—attempting to have a voice in the cinematic world.
You might also like
Dan StevensDavid HarbourLiam Neeson

END_OF_DOCUMENT_TOKEN_TO_BE_REPLACED
Taylor Sinople Picks: The 16 Best Films of 2016
Form and Function in Alex Ross Perry’s “Queen of Earth&...
Digging for Fire and Unexpected: Husband and Wife Process Parenthoo...
Every Thing Will Be Fine 3D Review