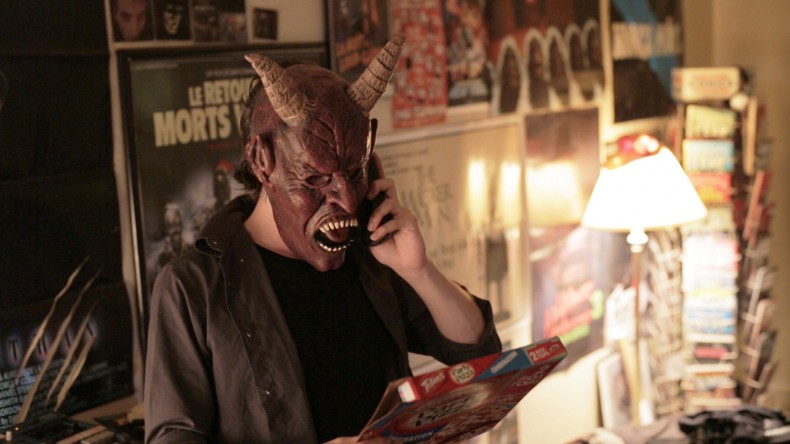 Not since Richard Linklater’s Austin came to life in 1991’s Slacker, or when Dante and Randall had a particularly interesting day at the Quik Stop in 1994’s Clerks, has the world seen someone as aggressively lazy as Marty Jackitansky (Joshua Burge), a twentysomething temp at one of the local First Federal Bank branches. His only ambition in life is to make money doing as little work as possible, which invariably leads him to take extreme measures to trick and con people into giving him what he wants.

When his boss gives him a stack of uncashed checks to mail out to their recipients, Marty decides to try something new by signing them over in his name and cashing them over time at the bank. When he learns that his job tracks the digital scans of the checks that are taken after being deposited, Marty hides out with his work friend – a balding loser named Derek (Joel Potrykus) – who has dubbed his parents’ basement as his “party zone.” Marty, whose only real possession is a handmade replica of Freddy Krueger’s knife glove, stays with Derek until an argument between the two forces Marty back on the road to Detroit, where he’s forced to survive off a little bit of cash and even less hope for any sort of redemption.

The final film in a loosely-connected trilogy by Joel Potrykus and Joshua Barge, Buzzard is that rare micro-budget indie that is able to transcend its noticeably lesser production values by coming equipped with a powerful screenplay, a wildly inventive director, and an astounding lead performance. From its opening moments, Buzzard is unashamed of what it is, and proceeds to be one of the eeriest, funniest, and most frustrating films of recent memory. Imagine Jake Gyllenhaal’s Lou Bloom from Nightcrawler if he worked retail in Podunk, USA.

And, like Nightcrawler, Buzzard is a film that, when asking five different people what genre it is, will elicit five different answers. It’s a comedy, it’s a character study, it’s a drama, it’s a horror movie, it’s a social satire. And somehow, it doesn’t necessarily strive to be viewed as any or all of these things. It operates as a singular, original experience, on its own terms. One doesn’t get the notion that, beyond some vague influences, Potrykus made a point to reference or imitate films that he’s seen, but to start from scratch and almost invent a new visual language for his film to work. Sure, there are some allusions to other works – in fact, Buzzard could be the product of reading far too much Camus and watching Office Space and A Nightmare on Elm Street back-to-back for months on end – but Buzzard is undeniably one of the most inventively original movies, independent and otherwise, in recent years.

It’s rare to see a filmmaker so confident in the strength of his writing and his actors. Without these two elements, Buzzard would have undoubtedly crashed and burned in a pit of failure, but it doesn’t because Potrykus has a clarity of vision beyond many filmmakers with exponentially higher budgets and studio support. Buzzard never feels like a film that was passed through many hands before making it to the screen, and it’s astounding how easy it is to forget the power of a focused, singular piece of work until you see something as radical yet refined as Joel Potrykus’ film.

There is an air of social commentary at play here, as well, revolving mostly around this idea that the system that essentially created Marty is the one that has now decided to reject him entirely. There are moments of strong pathos in Marty’s developments, and it’s these moments that give us the insight we need to understand why Marty behaves in the way that he does, especially in the film’s second half, where we see him take a bus trip to Detroit only to watch him blow all of his money – $200 dollars, to be exact – on a fancy hotel and a plate of spaghetti.

This idea that Marty’s behavior is a direct result of his financial and domestic upbringing, developed through a series of tragically funny phone calls to his mother, reveals that Potrykus has more on his mind than portraying a series of cheap cons, or exploiting Derek’s ridiculous behavior, including a particularly memorable scene in which he instructs Marty to feed him chips from the treadmill in his Party Zone. In a way, Buzzard is a call to action, in which viewers are given an honest examination of what happens when we decide to bottleneck potential in favor of corporate or capitalistic gains. It’s hilarious and entertaining, but it works because Potrykus presents the characters as obviously having, or having had, ambition to do more, regardless of what they say, without the opportunity or means to do so.

If Buzzard has moments of uncharacteristically broad comedy, as well as some mild pacing issues in the second act, it’s still a powerful statement on the misguided hubris of young, working class American men, their goals, and the system in place that keeps them from achieving those goals. If watching Marty scarf down a plate of spaghetti and meatballs teaches us anything, it’s that worse men with better luck have lived far more fortunate lives than he, and, in its final moments, Buzzard shows the soulless depths to which one must stoop in order to find any success, whether that success means owning a profitable business, or letting the system take its course until finally, after days of wandering, we are able to return home, free to engage once more with our humdrum, systematic lives.

END_OF_DOCUMENT_TOKEN_TO_BE_REPLACED
Taylor Sinople Picks: The 16 Best Films of 2016
Form and Function in Alex Ross Perry’s “Queen of Earth&...
Digging for Fire and Unexpected: Husband and Wife Process Parenthoo...
Every Thing Will Be Fine 3D Review