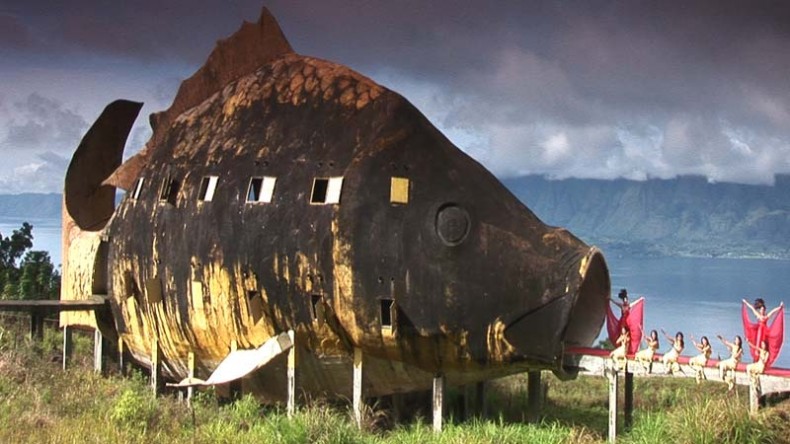 How do you process atrocities that have been committed without consequence? We have some path to coming to terms with “Shoah” knowing the ultimate defeat of the Nazi regime, but “The Act of Killing” gives us the unsettling experience of getting to know the perpetrators of crimes that will never be paid for.

In 1965, the Indonesian government was overthrown by the military and common gangsters were hired to lead death squads in the mass execution of Indonesians and ethnic Chinese suspected of being affiliated with communism. Because the government overthrow was never reversed, these executioners never faced consequences of any kind and to this day are living wealthy, proud lives. Anwar Congo is one such leader of death. Congo shares his story with documentarian Joshua Oppenheimer and takes part in a filmed recreation of the torture and killings that he personally took part in over forty years earlier.

As documentaries go, you can’t find subject matter much more appalling than the every-day look at the life of a man who has personally killed over 1,000 men and women under the pretense of political disposition. Congo is living in a reality distorted by his own wild rationalizations. The history of a nation and of a individual is written by the victor, and Congo’s warped personal history is defined by “doing what had to be done.” Oppenheimer hopes that through the reflective process of recreating the acts of torture and murder in a fictional film, Congo will come to understand the outside perspective of his actions.

These are leaders of brutal war crimes that are, unfathomably, completely unable or unwilling to understand how someone outside of Indonesia may see them as monsters. But even civilian Indonesians see it in their careful behavior around Congo and refusal to admit that they had any knowledge of the killings even after having lived and worked in close vicinity with the genocide.

“The Act of Killing” is a devastating, unprecedented document of the capabilities of mankind as powerful and important as they come. Oppenheimer leads us, and Congo, through a history of unregulated acts of murder and towards the film’s ultimately unforgettable conclusion.

Taylor is a Chicago-based writer and aspiring film historian. He is the editor here at TFP, and has contributed to a number of international publications such as Cinema Scandinavia, PopMatters, and Room 101 Magazine. He can also be found listening to podcasts, researching topics he has little use for, or running after a city bus.
You might also like
Joshua Oppenheimer

by Taylor Sinople on October 26, 2014
In 1965, the Indonesian army overthrew the government and murdered more than one million people deemed “communists.” The perpetrators of those crimes are, to this day, in power and seen as heroes. Joshua Oppenheimer’s “The Act of Killing,” one of the most important documentaries of our time, challenged those perpetrators to reenact their executions and […]

by Zack Miller on July 20, 2014
Here’s what’s new to Netflix Instant for the week of July 14. Top Picks The Master (2012) Directed by Paul Thomas Anderson Despite there being six years of releases yet to come, “The Master” has already all but guaranteed a spot in my top 10 of this decade. The title is incredibly apt, considering the […]
comments
Leave a reply
Add Comment Register

END_OF_DOCUMENT_TOKEN_TO_BE_REPLACED
Taylor Sinople Picks: The 16 Best Films of 2016
Form and Function in Alex Ross Perry’s “Queen of Earth&...
Digging for Fire and Unexpected: Husband and Wife Process Parenthoo...
Every Thing Will Be Fine 3D Review