Reviews
1
previous article
Review: What We Do in the Shadows
next article
“Annie Hall” (1977) and the Inescapability of Being “a real Jew” 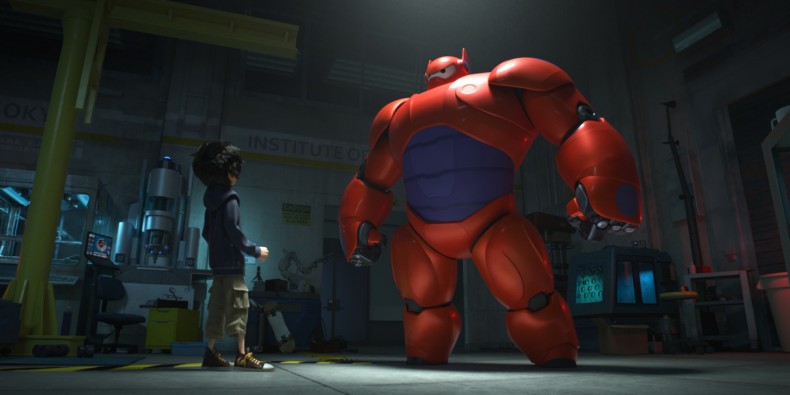 As one of Disney's most ambitious films to date, this "kid's flick" has a hearty blend of laughs, tears, and superheroes that the whole family can enjoy.

If Hayao Miyazaki was able to collaborate with Disney, chances are the final product would look something like Don Hall and Chris Williams’ animated feature “Big Hero 6.” This story follows a robotics whiz kid, Hiro Hamada (Ryan Potter), and an inflatable oafish robot, Baymax (Scott Adsit), as they discover a masked villain running rampant through the city of San Fransokyo. To save their home, Hiro and Baymax must team up with their friends, Fred (T.J. Miller), Go Go (Jamie Chung), Wasabi (Damon Wayans Jr.), and Honey Lemon (Genesis Rodriguez), and make the “upgrade” from regular Joes to superheroes. While “Big Hero 6” explores familiar tropes like good versus evil and the power of friendship, it’s clear that Disney is branching out and experimenting with new ideas and artistic influences.

One aspect of this film that set it apart from its predecessors is the type of characters presented. Unlike the altruistic and faultless heroes audiences have seen before, Hiro breaks that mold — making his name almost ironic. At the start of the film, he’s seen hustling people in “bot fights” and breaking the law by gambling on them. While taking part in devious activities is not enough deviation from the typical hero, his other issue is that he is also at the mercy of his emotions — specifically anger — which take over his judgement and cause him to lose focus of what is important. It’s clear the film is sending the message that being a “Hiro”, or the hero, does not mean being perfect. Aside from Hiro, the other minor characters also have their own unique makeup. Even when the group makes the shift into becoming saviors of the city, there is not a complete abandonment of who they were previously and they never fully embrace being strong, brave, and smart like the viewer would expect. Even when they’re in costume, they trip, they make mistakes, and they get scared. This reinforces that same message that heroes come in different packages.

Another reason “Big Hero 6” is so enjoyable is due to its Japanese influence, evident by the San Fransokyo setting and names like Hiro and Tadashi, instead of the Americanized cities and characters in prior films. The city glows with vibrant greens, blues, and pinks against pagoda style buildings and bridges, all which leave audiences spellbound with their exotic beauty. As Baymax and Hiro glide through the clouds, they must navigate through staggering skyscrapers and flying machines that look like something out of Miyazaki’s sketch book. Even the masked villain shows Japanese influences, as he dons a kabuki mask. Those that have not experienced Japanese cinema before can indulge in the vibrant cinematography that the country boasts.

With the new setting and influences also comes new cinematography. To give off the aura of an action and superhero film, Hall and Williams utilize fast-paced shots that put the viewer in the midst of a car chase or a battle. There are still classic steady shots for the more tender moments, but the directors clearly made a deliberate effort to shake things up to create more tension for the audience.

Obviously humor is another big draw for this film. While earlier Disney movies like “Wreck-It Ralph” (2012) relied more on word play, much of the humor in “Big Hero 6” comes from a long set up and a little punchline, or even no punchline at all. It is this subversion of expectation that delivers the biggest laughs. Also, the sheer awkward nature of Baymax is what makes him so comedic. Whether it is watching him navigate through the busy streets with no regard for traffic swerving around him or diagnosing Hiro with “puberty,” there is enough lightheartedness to keep younger audiences — or audiences that are young at heart — entertained. Make no mistake though, there is also plenty of humor for those that are more advanced, specifically when Baymax gets a low battery. His slurred speech and staggered movements are reminiscent of everyone’s friend who has a few too many at the bar.

“Big Hero 6” has plenty of high points to boast, yet, like any film, there are small weaknesses to be discussed. One of the biggest qualms is the development of the villain. His backstory and motivations are fascinating — they raise questions about if he is truly evil — yet his lack of screen time makes the characters’ shift to superheroes seem like they are going overboard to stop him. Also, audiences are almost too suddenly given his motivations and background in only a few scenes. With more screentime, he would feel like a bigger threat to San Fransokyo. Also, at times, heavy handed dialogue is used when silence would suffice.

Overall, “Big Hero 6” is ambitious and different. Characters have a darker side, and the setting boasts more qualities of Japanese anime than other projects. At its core, it’s about the power of friendship and rising up to do what is right. Messages and morals go side by side with jokes that are fresh and entertaining enough for viewers young and old. Also, any comic book fan should stick around for the post-credit scene.

PG for "action and peril, some rude humor, and thematic elements."

Due to an affinity for Classic Hollywood, Chris spends most of his time looking for the “newest” old movies to watch. When he’s not scanning Netflix, or annoying his girlfriend with movie references, Chris spends his free time wishing he could be Cary Grant.
You might also like
Damon Wayans Jr.Genesis RodriguezTJ Miller

END_OF_DOCUMENT_TOKEN_TO_BE_REPLACED
Taylor Sinople Picks: The 16 Best Films of 2016
Form and Function in Alex Ross Perry’s “Queen of Earth&...
Digging for Fire and Unexpected: Husband and Wife Process Parenthoo...
Every Thing Will Be Fine 3D Review