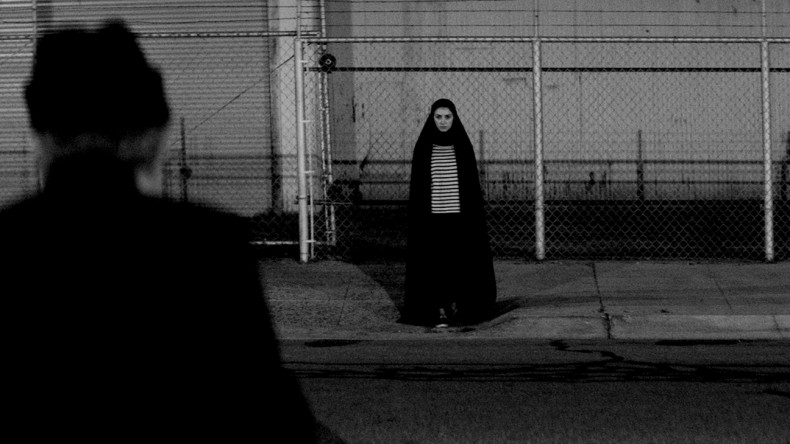 A Girl Walks Home Alone At Night is all style and no substance, which is a problem because it isn’t nearly as stylish as it thinks it is.

In Bad City, a fictional Iranian community, a mostly silent being walks the streets, preying on whoever will succumb to her odd charm. She’s just a girl (Sheila Vand), but she’s also a bloodthirsty vampire, and when Arash (Arash Marandi) comes home late from a party one night, he instantly falls in love with this girl, regardless of what she is or what she’s done. All he’s got left is a drug-addicted father (Marshall Manesh) with an insurmountable death to a ruthless drug dealer from the neighborhood (Dominic Rains), so what does he have to lose?

The answer is a lot, and the film makes sure to take everything away from Arash before sending him into the sunset, which is more like a dimly lit highway to nowhere, but I suppose that’s the point of writer-director Ana Lily Amirpour’s film, which is a grim, unappealing, and empty experience, one without much substance and a weak style to keep it going for its bloated 99 minute runtime. Filmed in crisp monochrome by Lyle Vincent, A Girl Walks forgets that, to function properly as a film that relies on style, the style needs to become the substance, not just serve as a temporary placeholder for substance that never arrives.

There are some mildly interesting anecdotes spread throughout. Most notably, the titular girl – who doesn’t have nearly enough screentime – is introduced as having a personality comprised of trinkets from her victims, a poignant comment on the nature of maturity and how young people are influenced by their communities. But Amirpour’s film is drenched with an arbitrary sense of “cool,” one that completely derails the film from ever becoming anything more than a feature-length perfume commercial, and a fairly uninteresting one at that.

I can understand and even enjoy a utilization of extreme style in place of a meaty script. Last year’s The Strange Color of Your Body’s Tears was one of last year’s greatest achievements, but it worked because the style was the substance. Certain visual cues, changes in color and lighting, all of that signified character development and ultimately created this amazingly lurid experience. A Girl Walks Home Alone at Night isn’t able to conjure even a fraction of the impact that it could have, and the film ends up playing like a sad excuse for a feature movie. There are glimpses of interest here and there – a long shot set to “Death” by White Lies is compelling until it isn’t anymore – but overall, Amirpour’s film is a wholly unsatisfying experience, and one that isn’t worthy of a fraction of the praise it has received.

END_OF_DOCUMENT_TOKEN_TO_BE_REPLACED
Taylor Sinople Picks: The 16 Best Films of 2016
Form and Function in Alex Ross Perry’s “Queen of Earth&...
Digging for Fire and Unexpected: Husband and Wife Process Parenthoo...
Every Thing Will Be Fine 3D Review