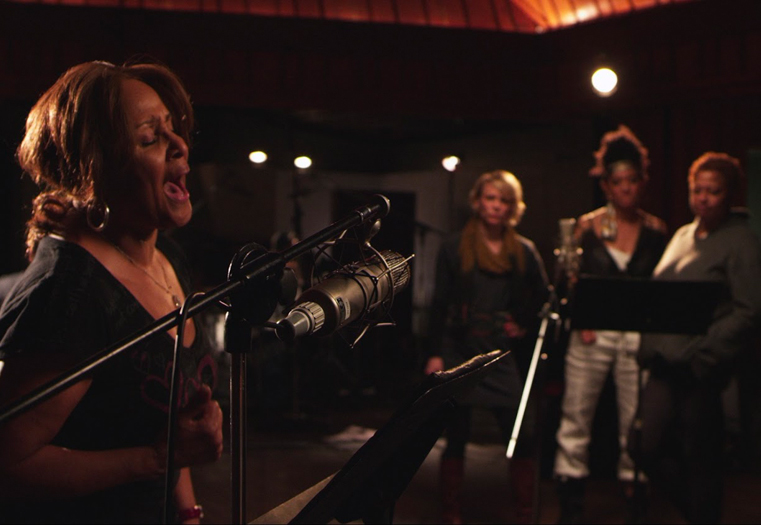 Featuring fascinating insight into the history and personalities behind back-up singing, as well as plenty of concert footage to please all sorts of music fans, “20 Feet From Stardom” is a must-see music documentary.

You go to see the star: the Bruce Springsteen, the Mick Jagger, the Stevie Wonder. If you’re a big fan, you may even know the names of the musicians, too – the drummer, the guitarist, the bassist. What’s less likely is that you’ll know anything about the. the women standing just off-center “ooh-ing” and “ah-ing” and adding the power behind the hooks of so many classic songs – the back-up singers. Despite being nameless, back-up singers have helped to define several decades of music. It’s about time that someone redirected the limelight towards the singers that work not off style, but raw talent.

Doing just this, “20 Feet from Stardom” is a music documentary that you can crank the volume to – celebrating the history of music while learning about a fold in the page that had yet to be pulled back. It tracks the stories of several crucially significant back-up singers that you’ve heard many times but never thought to look into. These are singers that have worked with incredible acts like David Bowie, The Talking Heads, Sting, Ray Charles, and the Rolling Stones, yet until now have received little acknowledgement in the public eye.

Take Merry Clayton: first active in the 1960’s, Merry recorded back-up vocals for the then unknown Lynyrd Skynyrd on the culturally important “Sweet Home Alabama” – a bold move in a time of civil unrest. Later, Merry most notoriously sang the famous rip-roaring duet with Mick Jagger on the Stones’ single “Gimme Shelter.” “Rape, murder! It’s just a shot away, it’s just a shot away.” The documentary isolates Merry’s vocals during the bridge of “Gimme Shelter”, allowing you to hear the pure passion and strain in her voice as it soars and cracks in a perfectly flawed performance tracked during a legendary middle-of-the-night recording session.

Also featured is Darlene Love, an original member of the vocal group The Blossoms (the first black group of singers, worked for and were cheated out of credit by famed producer Phil Spector). Love sang on huge songs – “Monster Mash” and “Christmas (Baby Please Come Home)” – songs so deeply embedded in popular culture that it’s shocking to come to an understanding of the person that sang on them.

While there are five singers featured (including current up-and-coming vocalist Judith Hill), “20 Feet From Stardom” is really telling a story about the history of back-up singing in general. Filling out the film are interviews with celebrities like Bruce Springsteen and Mick Jagger, as well as music historians and notable producers that add insight and historical reference to the evolving culture of music and the place of back-up vocals over time.

The film traces the roots of the emergence of African American back-up singing to gospel music – all of the women in the film grew up singing in a group context at church. From there, it is a whirlwind that carves a path through the dense music history of the 1960’s-80’s, a time when recording sessions were huge and music was about the lifestyle as much as the performance.

Also sneaking into the film are bits of introspective thought about what it takes to become successful, what success is, and how it differs from fame. There is no question that these women are successful. They’ve been featured on countless classic records, performed for hundreds of thousands, hung out with the biggest stars in the world, and shaped the sonic journey of music itself – one is even inducted into the rock and roll hall of fame – yet they are not famous, not stars, not household names. Even with the talent, they are subject to circumstance as much as anyone else. This psychological subset is as satisfying to absorb as the music documentary it sits inside.

There’s no doubt that back-up singers are the industry’s best-kept secret. Through eye-opening stories and interviews, “20 Feet From Stardom” dissects the texture of back-up vocals to reveal the humans underneath that have fought for decades to stand on stage with the headliners, content to sit just twenty short feet from stardom.

END_OF_DOCUMENT_TOKEN_TO_BE_REPLACED
Taylor Sinople Picks: The 16 Best Films of 2016
Form and Function in Alex Ross Perry’s “Queen of Earth&...
Digging for Fire and Unexpected: Husband and Wife Process Parenthoo...
Every Thing Will Be Fine 3D Review