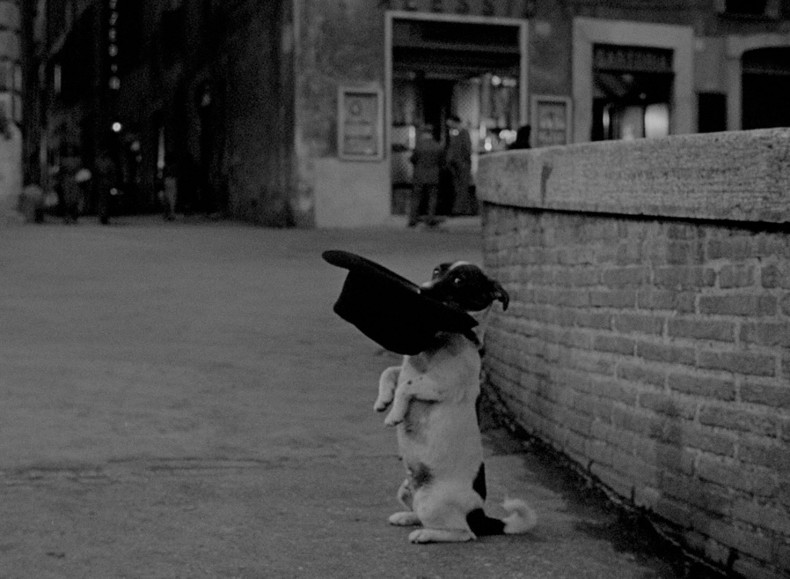 Editor’s Note: Our “Upon Further Review” series charts the history of films that were released to critical or public disinterest or disdain, but have since been widely considered classics.

Soon after the fall of the Mussolini government in 1943, Italy began its Golden Age of Cinema. As with many great artistic revolutions it was preceded by its very antithesis. Italian cinema had gone through a period known as calligraphism during the late 1930s and early 1940s, recognizable for its lavish set pieces and exaggerated characterizations. But at this same time a new literary movement of verismo (realism) was mounting pressure for the younger generation to return to a more naturalistic approach to filmmaking. And in the last years of the regime young writers and directors began to experiment with this idea, including a young Vittorio De Sica and his frequent collaborator/muse, writer Cesare Zavattini. Strangely enough, censorship actually slackened in Italy during the fascist reign, allowing a large growth in the industry during the early 1940s but followed but a sharp decline following the Allied invasion into southern Italy and not recovering until 1945. But from the ashes grew stunning aesthetic beauty, an “Italian Spring” that casted aside the decadence of its past cinema. Irrevocable damage had been caused to its studios during the war which encouraged the burgeoning realist movement; directors abandoned artifice, utilizing the war-torn cities and rich countrysides as the backdrop for often unblinking examinations of the country’s recent events.

De Sica became one of the foremost auteurs of this age, a director’s whose acerbic criticisms of postwar social strife were met with condemnation from postwar officials. He was an early adopter of new realism, with his 1943 work “The Children are Watching Us” paving the way for tragic, socially conscious films to come by bounding past melodrama toward deeper inquiries of contemporaneous morality. Cinema quickly moved to examine the events of WWII directly, evidenced by Rossellini’s “Open City” and “Paisa,” but also the strife stemming from its wake: unemployment, inflation, and political division. The latter injustices were the primary targets of De Sica, who was able to encapsulate the interpersonal tension and isolation found in a distraught subset of the Italian citizenry. “Umberto D” would become the culmination of these themes and of Neorealism itself.

Umberto Domenico Ferrari is destitute retired civil service clerk, first seen amidst a sea of protesters clamoring for a meager increase in pension to pay his debts. He is under constant threat of eviction from his callous and banally opportunistic landlady who is given to renting out his room hourly so that passersby may carry out their sordid affairs. He is forced to sell prized belongings and con his way into an elongated hospital stay to supplement and stretch his income. Flick, a terrier and his only companion, accompanies him, though he maintains a cordial relationship with the maid of his building who drifts almost aimlessly throughout the film, pregnant and unwed. With each passing day the world closes in upon Umberto, and under threat of losing his home and seeing no value in his future he attempts to end his life.

Emotionally driven as the story of Umberto is, in the words of Vernon Young, “To praise the film for its human appeal is as needless and as miserly as to praise a beautiful woman for her conspicuous virtue.” It is a splendidly shot film in its lack of technical trickery and movement. The subject is vastly more important than the camera and cinematographer G.R. Aldo is well aware. The focus is on the “dailiness,” as Zavattini put it, of this powerfully dreary existence. In one of its most famous sequences, the maid awakens and begins her morning routine. She strikes a match where the scratchings of a thousand matches have been etched into the wall from a thousand morning beginning the same way. The camera is then on the outside of the apartment looking in, emphasizing the inescapable mediocrity she finds herself in. She douses ants to rid them from a wall and commences to grinding coffee, fuel for a tired and repetitive existence. All of this is informed by what we know of the character, of her pregnancy, of her anxiety, and of her subservient role.

This story of a lonely, destitute old man clinging to his last vestiges of dignity and humanity, portrayed with a greater sense of realism than De Sica or perhaps any Italian director had ever before attempted, became both one of the high points and a nail in the coffin of Neorealism. Italy had become increasingly concerned with its cultural image, both domestically and internationally. And in an effort to curb embarrassment stemming from the international releases of the new, oft ennui-laden analyses of post-war Italy, then state undersecretary in charge of entertainment (and eventual 59th Italian Prime Minister) Giulio Andreotti created the aptly named Andreotti law. This provided Italian scripts largely devoid of political consciousness larger sums of money to ensure the proliferation of state-appeasing cinema but also contained a caveat: a film could be denied an export license were it to slander the nation. De Sica became the largest target for Andreotti with “Umberto D,” his last collaboration with Zavattini, raising more ire than any of his previous films. It would not receive distribution to the United States for three years and was viciously attacked at home. In an open letter to De Sica, Andreotti declared that he had done “a wretched service to his fatherland.”

Despite its detractors throughout Italy, government or otherwise (the film was massively unsuccessful at the box office with much of the public viewing it as a damning portrayal of government in a time of recovery), the film would eventually be met with its deserved acclaim. Cesare Zavattini would go on to be nominated for the Academy Award for Story in 1957 and patron saint of all things film criticism Andre Bazin lauded the film in his essay “De Sica: Metteur en Scene.” But Italian cinema would never again reach the subversive heights it did in “Umberto D,” as stirring cinematic indictments gave way to individualistic stories of love and loss.

END_OF_DOCUMENT_TOKEN_TO_BE_REPLACED
Taylor Sinople Picks: The 16 Best Films of 2016
Form and Function in Alex Ross Perry’s “Queen of Earth&...
Digging for Fire and Unexpected: Husband and Wife Process Parenthoo...
Every Thing Will Be Fine 3D Review