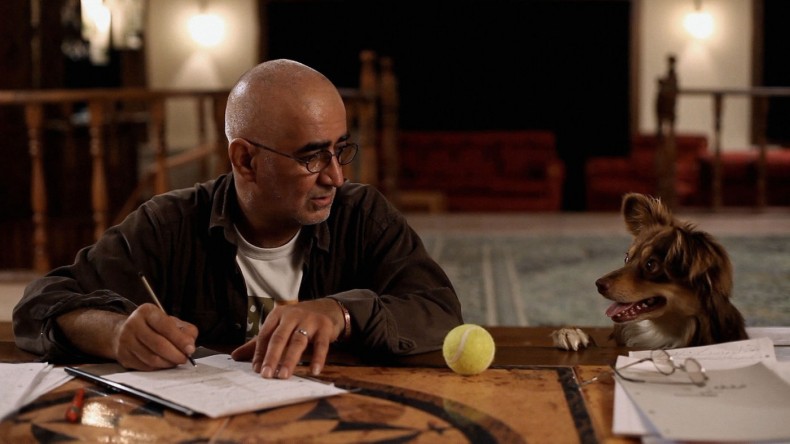 Celebrated Iranian New Wave auteur Jafar Panahi was once traveling the world with his films and collaborating with fellow Iranian paragon Abbas Kiarostami.

Those days were ended in 2010, when Panahi was infamously arrested. In a shocking ruling, his films were declared “propaganda used against the Islamic Republic” – he was sentenced to six years imprisonment and banishment from traveling abroad or making films for 20 years. After a great outcry from filmmakers and critics alike, Panahi resurfaced in 2011 with the video-diary documentary “This Is Not a Film” which was shot on an iPhone and smuggled out of Iran on a flash-drive hidden in a cake to be shown at Cannes. Now three years after the initial sentencing, Panahi returns again with his first post-ban narrative film.

While Fellini’s brilliant “8 ½” brought to life the constraining impact of writer’s block, Panahi’s “Closed Curtain” explores the mind of a filmmaker who lacks not the ideas, but the means to produce them. Both filmmakers use their art as a powerfully personal outlet of inner frustration, but Panahi’s work comes with an extraordinary sense of risk.

Shot in secrecy with a barebones crew in the director’s own home, “Closed Curtain” places the viewer firmly in the confinement of artistic oppression from the first frame. The sea is viewed from behind the bars of a security fence as a taxi arrives to drop off a man with a duffel bag. Looking out from the barred window, we watch him wind his way up the front drive and enter the home before sharply closing thick curtains on the glass – the first taste of the blend of literal and figurative poeticism Panahi aspires to create with this fictional-documentary reality-bender.

The man from the taxi (played by co-director Kambuzia Partovi) turns out to be a screenwriter who is shutting himself into the spacious, wooden Iranian home in order to write in peace and hide the contents of his duffel bag. He unzips the bag and a small dog pops his head out. A TV report covers the recent ban of domestic dog ownership. As the man settles in, his isolated peace is interrupted by a series of intrusions that include a suicidal stranger (Maryam Moqadam), thieves, and director Jafar Panahi himself. As “Closed Curtain” goes on, its once traditional narrative of the man with the secret dog becomes warped by Panahi’s presence in the film. The fictional elements of the story begin to crumble under a suddenly documentative shift that follows Panahi’s melancholic struggle with being unable to make movies. 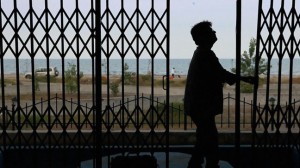 There’s something so absorbing about the duality of character and creator both hiding in this home and covering the windows to protect themselves from oppression. What begins as a traditional story becomes something beautifully open to interpretation and multiple conclusions. Don’t read this is as terribly complex, though, as there’s something unmistakably enjoyable about watching “Closed Curtain.” For such an atypical, subversive work of ambition, it really is a light little piece, and a marvel – knowing the unavoidably low budget. The only time these production limitations (that included shooting on a consumer DSLR) are apparent are in the occasional eye-yanking distraction of moire patterns on narrow-hatched fabrics like a shirt collar or couch cushion.

The only significant narrative issue that comes along with “Closed Curtain” (and other films like it) is that it absolutely requires knowledge of the director and the cultural history of Iranian cinema in order to strike full impact. While it does make the film inaccessible to many, this level of personal input make for a deeply enriched experience for the educated audience. There is nothing overtly emotional about the story in “Closed Curtain,” and yet a sense of desperation and longing appears in every scene. A friend, suspecting his sadness, reminds Panahi that there is more to life than work. “Yes,” he responds “but those things are foreign to me.”

“Closed Curtain” was my last screening at the 49th Chicago International Film Festival – and it seems suited perfectly to close any film festival in the world this year. At genuine risk of further persecution, Panahi uses the medium without desire to sell a movie but simply to make one. Because it is therapy. Because it is a vital necessity to the auteur. Never has more validation been given to Godard’s famous and disputed quote: “Photography is truth, and cinema is truth 24 times per second.”

Taylor is a Chicago-based writer and aspiring film historian. He is the editor here at TFP, and has contributed to a number of international publications such as Cinema Scandinavia, PopMatters, and Room 101 Magazine. He can also be found listening to podcasts, researching topics he has little use for, or running after a city bus.
You might also like
closed curtainJafar PanahiMovies about Movies

by Taylor Sinople on December 3, 2013
In most forms of art, the potential for varied interpretation is an expected and treasured aspect of the viewing experience. A painter creates with an intimate level of depth – drawing his personal perspective of life into his work in ways that are explained in the title card next to the piece. Filmmakers don’t get […]
comments
Leave a reply
Add Comment Register