All SAG members (some 165,000 actors) are eligible to vote for the SAG Awards. This year, many of the performance-only awards followed suit with what we saw at the Golden Globes earlier this week. Matthew McConaughey and Jared Leto both won for “Dallas Buyers Club” as did Cate Blanchett for her career-best work in “Blue Jasmine.” 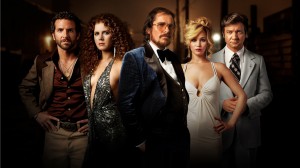 “American Hustle” – Winner: Outstanding Performance by a Cast in a Motion Picture

While David O. Russell’s “American Hustle” did win the top honor – best overall performance by a cast – no individual actor was honored in any of the categories. The SAG Awards deviated from the Globes by handing the award for Female Actor in a Supporting Role to Lupita Nyong’o in “12 Years a Slave,” rather than Jennifer Lawrence in “American Hustle”.  Nyong’o’s work as a slave both abused and treasured by a monstrous slave master (played by Michael Fassbender) has been widely acclaimed with particular attention called to the fact that it is her first film role.

Moving forward to the awards season finale at the Academy Awards on March 2nd, favorites in many categories have developed, priming each acting award for an upset should the Academy decide to break the trending winners of the year. Keep in touch with us over the next month as we chat about the nominees leading up the big ceremony, and check out the full list of winners from the 20th Screen Actors Guild Awards below.

Motion Pictures
Outstanding Performance by a…

Stunts
Outstanding Performance by a…

The 2014 Screen Actors Guild Awards were announced on January 18, 2014 at the Shrine Auditorium in Los Angeles.

Taylor is a Chicago-based writer and aspiring film historian. He is the editor here at TFP, and has contributed to a number of international publications such as Cinema Scandinavia, PopMatters, and Room 101 Magazine. He can also be found listening to podcasts, researching topics he has little use for, or running after a city bus.
You might also like
Award Season

by Taylor Sinople on February 12, 2014
Let’s face it; the sheer volume of incredible short films being produced around the world makes the actual Oscar nominations feel arbitrary. There’s simply no refining the international contributions to short form cinema to the “five best.” But, the show must go on. This year, the Academy has nominated five short films that are diverse […]

by Taylor Sinople on January 16, 2014
Click here to view the full list of nominations for the 86th Academy Awards The Oscars: “Recognizing the year’s best films…” …or, at least the ones that come out October-December, feature a towering lead performance, are financed and distributed via major studios, and push the boundaries in terms of story and form just hard enough to […]

by Taylor Sinople on January 16, 2014
The official nominations for the 86th Academy Awards were announced on Thursday, January 16th at 5:38am PST. The winners will be announced at the ceremony live on Oscar Sunday – March 2nd, 2014. Check back in with us weekly for discussion on the nominees and snubs! The Academy acknowledges a few of the best films […]
Comments
Leave a reply
Add Comment Register

END_OF_DOCUMENT_TOKEN_TO_BE_REPLACED
Taylor Sinople Picks: The 16 Best Films of 2016
Form and Function in Alex Ross Perry’s “Queen of Earth&...
Digging for Fire and Unexpected: Husband and Wife Process Parenthoo...
Every Thing Will Be Fine 3D Review