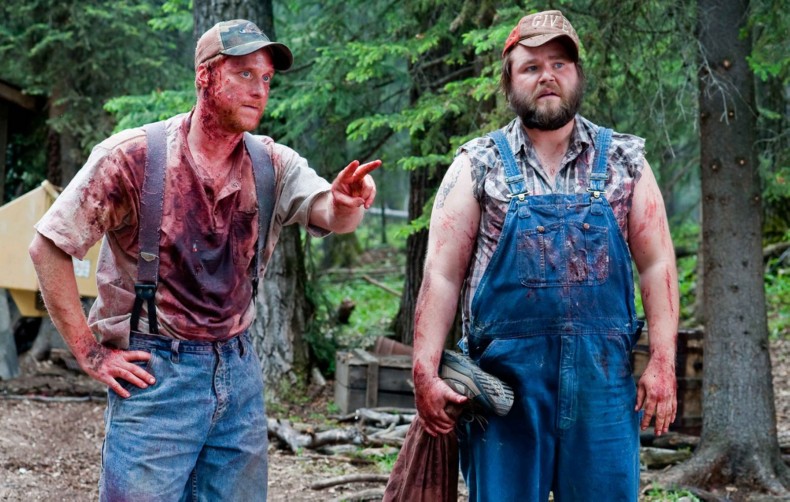 The genre “horror/comedy” might seem like a typo, but Eli Craig’s “Tucker & Dale vs. Evil” (2010) is just that, as it provides laughter by spoofing a horror film. This gem, now streaming on Netflix, tells the story of Tucker (Alan Tudyk) and Dale (Tyler Labine), two daft mountain men, who have their vacation ruined by a group of mostly shallow and judgmental co-eds. The formulaic co-eds are led by the unbearably preppy Chad (Jesse Moss), who despises anything and everything that is “hillbilly.” The only exception is Allison (Katrina Bowden), Dale’s love interest, who sees things on a deeper level. Due to a series of misunderstandings and a misplaced wood chipper, Tucker and Dale are branded as murderers that are terrorizing the students, forcing them to fight for their lives. While the film doesn’t deprive the audience of any moments of blood and gore, this mock cookie-cutter horror flick has substance and a clear message: never judge a book by its cover, or a movie by its poster.

Dialogue is key to deciphering the message of the film, as it allows Craig to create the idea of stereotypical class distinction. Through Dale’s inability to use proper verb tense and Tucker’s slow drawl, usually accompanied by a mouthful of Pabst Blue Ribbon, Craig portrays both men as typecasts for the Appalachia region. Meanwhile, the college kids use more structured language and talk about their sociology classes – which they clearly never gleaned any knowledge from. This idea resonates greatly when Chad remarks that the co-eds are “cut from a different cloth,” and when Dale states he has no place talking to a “high class” college girl like Allison. It is character dialogue, and the lack of it between the two classes, that stands out.

The first interaction between these two social groups takes place at a gas station, alluding to Craig’s grasp of horror conventions. What makes this scene so intriguing is the lack of dialogue between Tucker and Dale with the co-eds. Dale attempts to speak with Allison, but his preconceived notions about her social standing, coupled with his own social anxiety, makes him appear as a scary and ominous figure that will wreak havoc on them later in the film – another nod by Craig to the horror genre. Chad is also quick to quell any conversation between the two groups, as he stands in a defensive manner and threatens Dale with violence for approaching them. Here, an absence of dialogue between social groups causes a failure to find commonalities. Dale is afraid, and so are they.

As mentioned earlier, Allison is the one college student that tries to see things without bias. She “grew up on a farm” but attends a university. With mobility between social groups, she tries to establish dialogue between Tucker and Dale and the co-eds. By having Chad and Dale “talk it out” with each other, the audience learns the history of Chad’s experience with Tucker and Dale’s “kind,” which is nothing like them, as Dale admits he “can’t hurt a fish.” It is only during this scene that the characters achieve an understanding of each other, reminding the audience that stereotyping never illustrates the truth.

It is Tucker’s dialogue that echoes this sentiment throughout the film. At one point, he tells Dale that the co-eds are “just human,” like them. It is this simple truth that is completely replaced with stereotyping and bias. This is something else Tucker realizes, as he remarks that “what [something] looks like” is more important to society than the actual facts. The reality is that Tucker and Dale are two working-class gentlemen trying to get away for the weekend. However, they appear as the backwoods murderers other horror movies boast. The real horror of this film is brought about when one makes snap judgments about another’s character.

The greatest weakness of “Tucker & Dale vs. Evil” is the lack of marketing. Too few people have heard of it, and even fewer have seen it. It has the ability to draw in those who are not fans of horror with its comedy, and it can provide the necessary thrills of a horror film for those that are. Other than that, Dale’s strengths are not fleshed out until the final moments of the film, making it appear slightly out of character when it comes time to use them.

Overall, “Tucker & Dale vs. Evil” is a highly enjoyable film that pokes fun at the horror genre by imitating a campy slasher flick of yore. Through its humor, it sends a simple but powerful message that seems to be forgotten in the film industry: character is not synonymous with appearance.

END_OF_DOCUMENT_TOKEN_TO_BE_REPLACED
Taylor Sinople Picks: The 16 Best Films of 2016
Form and Function in Alex Ross Perry’s “Queen of Earth&...
Digging for Fire and Unexpected: Husband and Wife Process Parenthoo...
Every Thing Will Be Fine 3D Review