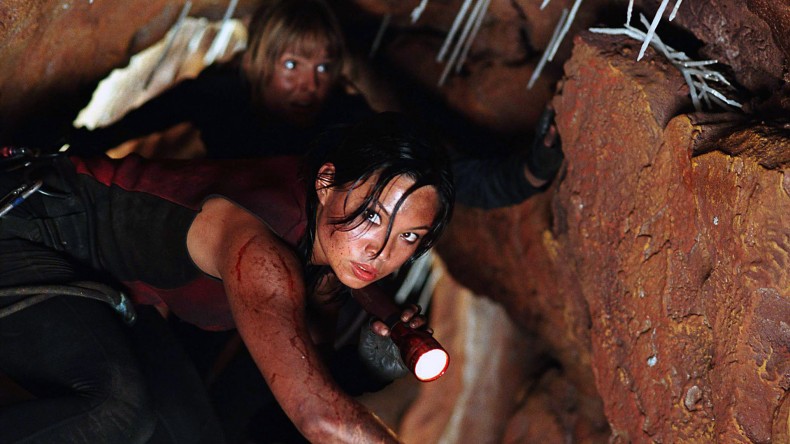 Neil Marshall’s “The Descent” has been celebrated, July of 2015 marks a decade since its initial UK release, as a modern B-movie classic. Marshall took elements of classic horror – a group of friends, an unfamiliar location, a group of bloodthirsty monsters, and some solid subtext – and turned it into a pillar of 21st century horror, one that continues to be ripped off at least once a year (“The Cave,” “As Above/So Below”, Spain’s “[REC],” and even Alfonso Cuaron’s “Gravity”).

But where does all this adoration come from? None of Marshall’s subsequent work has been nearly as successful, despite being, arguably, better than his earlier films. Quality notwithstanding, it’s also worth noting that “The Descent” is the only one of Marshall’s films to turn a profit at the box office, and even then it was only by an extremely small margin. So again, the question is posed: What does “The Descent” offer audiences that Neil Marshall has never been able to recreate?

The year was 2006, and a little UK horror film called “The Descent” had been making waves on the other side of the pond for a whole year before finally hitting US screens. Although the 2005 London train bombings had, no pun intended, derailed the film’s box office success, a huge word-of-mouth campaign, as well as critical acclaim across the board (a rarity for any horror film), gave Marshall’s film enough buzz to anticipate a strong debut in the states.

Horror fans had been spoiled through most of the early 2000s, with films like 2002’s “The Ring,” 2004’s “Saw,” and 2002’s “28 Days Later” adopting a post-Y2K, post-9/11 sensibility that more prominently began to focus on the unseen horror of technology, disease, and “the enemy,” giving horror directors a plethora of fears to exploit for the better half of the 2000s. However, by 2006, the American horror market was in a state of disarray, with fans flocking to foreign or independent markets to quench their insatiable thirst for scares. The studios were, as they are prone to be, completely out-of-touch with the consumer, spitting out nonsense like “House of Wax,” “The Devil’s Rejects,” and a seemingly unstoppable barrage of remakes and re-imaginings that served as nothing but blatant bastardizations of classic films.

Enter “The Descent”, an intelligent, low-budget, original idea from a filmmaker who, three years earlier, had directed a decently effective little movie called “Dog Soldiers.” The film follows six women, one of whom – Sarah (Shauna McDonald) – is recovering from a traumatic car accident which took the lives of her husband and daughter, as they go on an annual spelunking trip. This year, the group has agreed, at the request of Sarah’s closest friend Juno (Natalie Mendoza), to meet in the Appalachian Mountains, where they’ll explore one of the most popular caves in the region.

Accompanied by their usual team of adventurers – Beth (Alex Reid), Sam (MyAnna Buring), and Rebecca (Saskia Mulder) – as well as one of Juno’s new friends, Holly (Nora-Jane Noone), the women descend into what is expected to be a fairly predictable trek, one that Holly says should come with “hand-rails and a gift shop.” The cave is far more beautiful than they expected, and things are set to go off without a hitch until the tunnel leading them back to the surface is suddenly eroded, leaving them trapped and without a plan.

It’s only then that Juno reveals to them that they are all actually in an unmarked cave that has never been explored, mapped, or registered with any official organizations. In short, they’re stranded. Relying entirely on each other and their equipment to make it out alive, the women are picked off one-by-one when a group of crawlers who have adapted to the cave’s harsh conditions begin hunting them down.

Shot on a shoestring budget of 3.5 million pounds on a set built in London’s Pinewood Studios, “The Descent” begins to characterize itself with claustrophobia and kinetic thrills in lieu gore, though the second half provides both in spades. The film waits nearly an hour before introducing any of the crawlers, but when it does, the film shifts gears and becomes a non-stop thrill ride that lies somewhere between the stylishly horrific action of “Aliens” and the unyielding dread of John Carpenter’s “The Thing.”

However, Marshall’s initial rejection of and eventual reliance on graphic violence results in a somewhat uneven tone, and the two halves of the film never coalesce the way they should, despite the consistent development of themes present throughout. Additionally, Marshall doesn’t have the ear for dialogue that this film requires, and much of the first act, mostly when the six women are catching up and reacquainting themselves, is compiled of painfully cringe-worthy exchanges that do “The Descent”’s characters absolutely no favors, especially when things take a turn for the monstrous.

Finally, Marshall’s visual aesthetic just does not suit the film he’s trying to make. The frustratingly polished cinematography by Sam McCurdy often has an adverse effect, essentially removing the viewers from the tension by constantly reminding them, through increased frame rate and overly saturated color schemes, that it is, in fact, only a movie. To add insult to energy, the quick cutting in the second half’s action scenes and constant use of fades in the film’s first half, from editor Jon Harris, contribute to the film’s artificiality, despite the hyper-realistic sets from production designer Simon Bowles.

Despite all of its faults, “The Descent” delivers mostly as a result of Marshall’s vision for the film’s function, which incorporates enough subtextual material to interest viewers who may become bored by the repetitive fight sequences and lazy dialogue. Even at its worst, “The Descent” is far better than much of the horror that was being released at the time, and it could be argued that Marshall’s film kick-started the genre back where it needed to be, as an underdog darling in the eyes of critics and audiences alike.

Another element that has contributed to “The Descent”’s ongoing success is the continuing debate about the film’s multiple endings. The UK ending, which runs a minute longer than the edited US version, has sparked conversation about the film’s themes, especially those concerning survival, morality, and the “monster within.” On the one hand, some viewers have expressed the concern that Sarah’s journey just sends her further down both a metaphorical and literal hole, leaving her traumatized to the point of insanity, possibly giving context as to how and why the crawlers inhabited the cave in the first place.

On the other hand, some fans have adopted a more optimistic interpretation, stating that Sarah being reunited with an apparition of her daughter at the end of the film signifies their metaphysical reuniting in death. Neither is particularly optimistic considering the context of the film, but Marshall’s refusal to give direct answers, coupled with the film’s rebirthing imagery and subtextual content regarding pregnancy, family, and the life cycle (drowning in pools of blood, apparent social hierarchies among the crawlers, attacking the stomach of one particular victim), gives “The Descent” an enduring quality that outlives its admittedly dated visual techniques.

Although “The Descent” suffers from a rocky opening act, along with some elements that don’t quite cohere the way they should, the film makes a case for its inclusion among classic horror films with an ongoing influence that has inspired many other films since its 2005 release. It isn’t perfect by any stretch of the imagination, but Marshall has enough sense to rely neither on gore or jump scares to get his message across, even when the film isn’t as hair-raisingly terrifying as he thinks it is.

END_OF_DOCUMENT_TOKEN_TO_BE_REPLACED
Taylor Sinople Picks: The 16 Best Films of 2016
Form and Function in Alex Ross Perry’s “Queen of Earth&...
Digging for Fire and Unexpected: Husband and Wife Process Parenthoo...
Every Thing Will Be Fine 3D Review